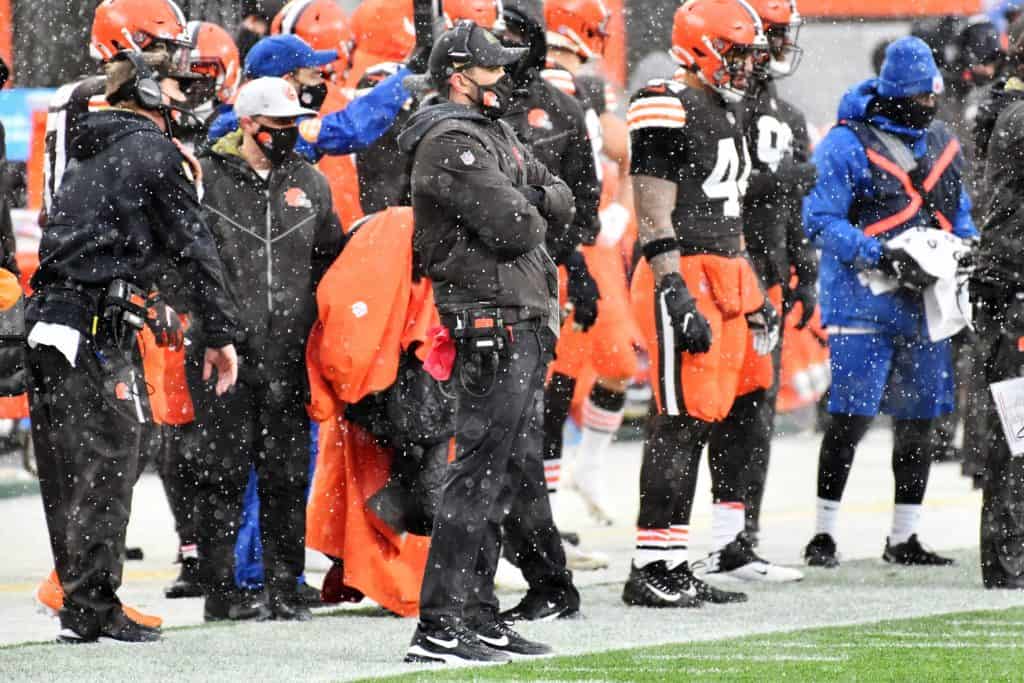 The Cleveland Browns’ depth chart may be one of the strongest in the entire NFL. Let’s take a look at a depth chart that the Browns will hope can carry them all the way to the Super Bowl in 2022.

If the Browns’ depth chart approaches its ceiling, there is no reason to believe they are not legitimate contenders to represent the AFC in Super Bowl LVI.

The Browns did not make any sweeping changes to their offense in 2021. However, they did add some more depth to the roster at wide receiver, running back, and along the offensive line.

As with all NFL teams, their success depends on how well their quarterback can perform. In 2020, Baker Mayfield played some of the best football of his career. While throwing for just 3,563 yards, he was able to do something he struggled with in previous years — ball security. Mayfield threw a career-low 8 interceptions to 26 touchdowns while completing 62.8% of his passes (305 of 486).

The work under head coach Kevin Stefanski has paid off massively as Baker Mayfield looks like the player the Browns always hoped would lead their franchise.

As far as backups go, Case Keenum is perfectly adequate in relief. Keenum is a nine-year pro who has started over 60 games during his career. While a considerable decline from Mayfield, Keenum can keep the offense afloat.

Formerly of the New York Giants, Kyle Lauletta has yet to complete a pass on his 5 career attempts.

The heartbeat of the Browns’ offensive depth chart is Nick Chubb. One of the NFL’s best running backs, Chubb is a constant threat to break off an explosive play. Since entering the league in 2018, Chubb is third in the NFL in rushing yards (3,557).

Paired with Chubb, Kareem Hunt gives the Browns the best running back duo in the NFL. A former 1,300-yard rusher, Hunt is also one of the best receiving backs in the league. He is entering the final year of his contract, and Chubb will be a free agent in 2022.

A bigger one-hit-wonder than The Baha Men, D’Ernest Johnson had 95 yards on 13 carries in Week 4 of 2020, quadrupling his career totals to that point. The addition of Demetric Felton gives the Browns an interesting chess piece. The rookie out of UCLA can be used as either a back or as a receiver out of the slot.

While not a threat from anywhere outside the goal line, Andy Janovich’s value for the Browns’ offense comes in his superior blocking ability.

Odell Beckham Jr., 28, is a three-time NFL Pro Bowler and former NFL Rookie of the Year. He has eclipsed the 1,000-receiving-yard mark five times in his career. The Browns can only wait for Beckham to return as he recovers from a torn ACL suffered in Week 7 against the Bengals.

Browns WR Jarvis Landry is coming off a down season based on his elite standards. Landry set career-lows in targets (101), receptions (72), and touchdowns (3) while putting the second-fewest yards (840) since his rookie season. However, outside his 2015 rookie campaign, Landry has seen at least 131 targets and recorded 975 or more yards in the five previous seasons.

Rashard Higgins signed a one-year deal to return to Cleveland this offseason. Higgins, 26, took over for Beckham on the Browns’ depth chart following his injury, serving as the vertical threat. He finished the season with 37 receptions for 599 yards and 4 touchdowns.

Although never realizing his potential at the University of Michigan, Donovan Peoples-Jones could become one of the Browns’ best receivers. At 6’2″, 212 pounds, Peoples-Jones has the size to play outside and flashed on the field in his limited action. Seeing 20 targets, Peoples-Jones caught 14 passes for 304 yards and 2 touchdowns.

In the draft, the Browns added a speedster in Anthony Schwartz. He topped the list of 40-times in the lead up to the draft, and had 636 receiving yards on 54 receptions with Auburn.

The Browns made a massive addition to their depth chart in 2020 by adding Austin Hooper. Although the season did not live up to the lofty expectations many assumed, Hooper still enjoyed a solid year. He finished with 46 receptions, 435 yards, and 4 touchdowns in 13 games.

A Mackey Award winner in college, Harrison Bryant showed his skills as a rookie despite tight ends traditionally struggling their rookie season. Bryant made nine starts, caught 24 of 38 passes for 238 yards and 3 touchdowns while usurping David Njoku on the Browns’ depth chart.

A first-round pick in 2017, Njoku has never blossomed into the player the Browns pictured. Also, the two sides are at a bit of an impasse. Njoku has asked for a trade at least twice but remains on the roster. Over the last two seasons, Njoku has 24 receptions, 254 yards, and 3 touchdowns.

The Browns look like they knocked it out of the park with Jedrick Wills. While he can still improve on his run blocking, no one is touching Mayfield from his blindside.

Initially drafted by the Tennessee Titans in the first round, Cleveland signed Jack Conklin in 2020, a move that seemingly paid off. Conklin earned NFL All-Pro Team honors last season.

Chris Hubbard played in 73 games over the last five seasons, including 34 starts for the Browns in the previous three. He has experience at right guard and tackle. He will likely compete with 2021 NFL Draft pick James Hudson to be the primary backup at the tackle position.

The Dallas Cowboys selected Greg Senat in 2018 and he is now on his fourth team, including his second stint on the Browns, where he was on the practice squad.

Playing in 11 games, Wyatt Teller proved to be one of the best guards in the NFL. Playing 694 snaps, Teller was called for only 5 penalties and gave up just 3 sacks. He was named 2020 All-Pro along with fellow guard Joel Bitonio who played 1,061 snaps, allowing 1 sack and committing 3 penalties.

Together, they are the best interior offensive guard combination in the NFL.

J.C. Tretter has started all 64 games as a member of the Browns, capping off what is presumably the best offensive line depth chart in the NFL.

The Browns drafted Nick Harris in the fifth round last season. He made one start and appeared in 12 games.