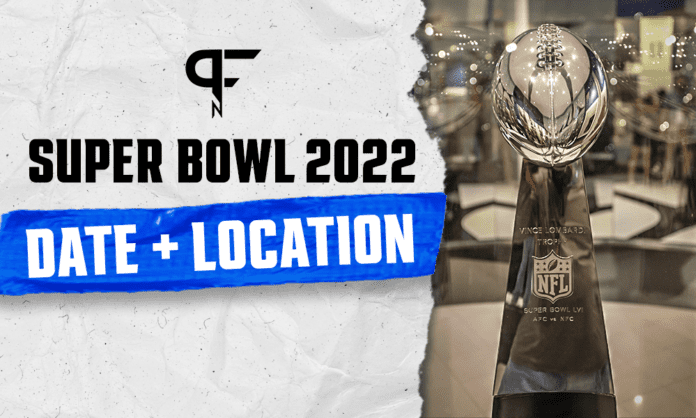 What is the date and location of the 2022 Super Bowl, who will broadcast the game, what is the halftime show, and who are favorites to win?

What is the location and date for the Super Bowl in 2022? After Super Bowl LV was held in Tampa Bay, where will the NFL’s flagship event be played in 2022, where will it be broadcast, who is performing the halftime show, and which teams are the favorite to square off?

What is the Super Bowl 2022 location?

SoFi Stadium gets the nod to host the Super Bowl in 2022. SoFi sits in Inglewood, California, with a capacity of 70,000. However, it’s expandable to slightly over 100,000 for large events, such as a Super Bowl. It was supposed to host Super Bowl LV, but construction delays derailed that plan.

How was the 2022 Super Bowl awarded to Los Angeles?

Although Los Angeles originally won one of the bids from the cluster made available of LIII, LIV, and LV, they couldn’t host in 2021. The three Super Bowl hosts were chosen from a four-candidate pool. However, with the delay, all four locations got a spot.

This allowed the Tampa Bay Buccaneers to become the first team to win a Super Bowl in their home stadium. Because of the SoFi Stadium construction, Atlanta, Miami, Los Angeles, and Tampa Bay all got their Super Bowls.

For years, the Super Bowl commences on the first Sunday in February. Yet, because money speaks louder than Stephen A. Smith with a microphone, the NFL expanded their season to 17 games. This pushes the league’s premier product to February 13, the latest in the game’s history.

Who will broadcast the Super Bowl, and what is the halftime show set to be?

In a stroke of marketing genius, CBS and NBC switched hosting duties in 2021 and 2022 — Super Bowl LVI and the Winter Olympics coincide. Therefore, CBS traded for 2021, where they could market the Final Four during the Super Bowl, and now NBC can cross-promote as well. It was an easy business decision from both sides.

Now, the NFL no longer has to fight the Winter Olympics for views. The game will also be available on NBC’s Spanish sister station, Telemundo. This marks the first-ever Spanish broadcast on broadcast television. Both sides rarely win a trade, but that was the case here.

The Pepsi Twitter account announced on September 30 that the 2022 Super Bowl halftime show will consist of the likes of Eminem, Mary J. Blige, Kendrick Lamar, Dr. Dre, and Snoop Dogg. The Weeknd performed at Super Bowl LV, and Shakira and Jennifer Lopez performed the year prior.

Back in 2019, the NFL and Jay-Z’s Roc Nation entered a partnership to enhance the league’s live performances across all their major events. One part of the partnership included that Roc Nation would take a big part in advising the league who they should choose for performances such as the Super Bowl Halftime Show.

The 2022 Super Bowl Halftime Show will be the first for all artists aside from Blige’s appearance in 2001.

Who is predicted to win Super Bowl 56?

Which teams are currently favorites in each conference to play in (and win) the Super Bowl next season?

Weirdly, the Tampa Bay Buccaneers don’t hold the best odds of winning the Super Bowl in 2022. Their previous Super Bowl opponent has better odds, despite Tampa Bay returning all 22 starters from their Super Bowl squad. The Buccaneers are currently +600 to win it all in 2022, according to Vegas Insider.

Despite losing Super Bowl LV, the Chiefs head into 2022 as Super Bowl favorites. It’s not wild to assume they get back there, given they’ve been to the previous three conference championships and the last two Super Bowls. Their +500 odds to win the Super Bowl in 2022 are the best in the NFL.