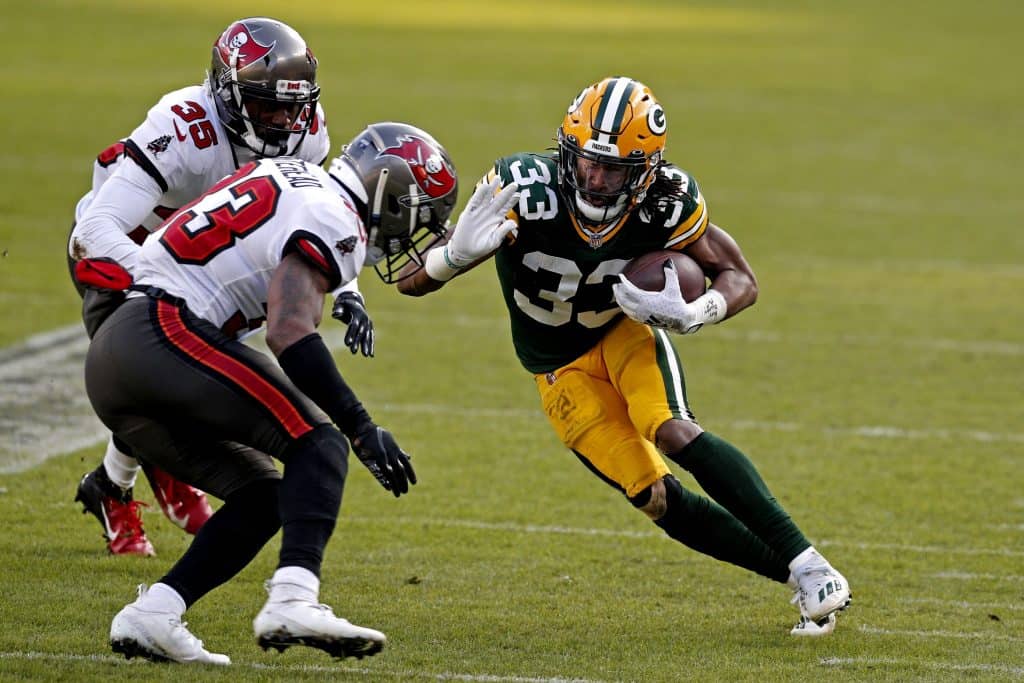 The biggest running back name in the 2021 NFL free agency class, Green Bay Packers RB Aaron Jones, will have no shortage of potential landing spots. One of the most efficient rushers in the game, Aaron Jones brings a versatile skill set that could be featured in any offense for the right price.

Aaron Jones has flourished under the Matt LaFleur offense

It is almost puzzling how former Packers head coach Mike McCarthy failed to see Aaron Jones’ talent. Yet, he was not the only one. Jones fell to the fifth round of the 2017 NFL Draft. Finally, the former UTEP RB came off the board with the 182nd overall pick. McCarthy loses some benefit of the doubt as he was around Jones every day, and it was not as if the Packers had All-Pro RB talent ahead of him.

Under Matt LaFleur, Aaron Jones became a household name. In 2019, Jones played in all 16 games and ran for a career-high of 1,084 rushing yards on 236 attempts. He also worked out of the backfield as a receiver, catching 49 of 68 targets for 474 yards. He also led the NFL with 19 total touchdowns.

Aaron Jones’ success continued into 2020 as free agency loomed on the horizon. In his contract year, Jones carried the ball 201 times for 1,104 yards, a new career-best. He added 47 receptions for 355 yards and totaled 11 touchdowns. Of the 33 running backs who had at least 130 carries in 2020, Aaron Jones ranked third in efficiency at 5.49 yards per attempt.

Due to lost revenue of the 2020 season, the NFL salary cap took a massive hit. While it has yet to be nailed down, current estimations have the salary cap at around the $185.5 million range. Earlier in the year, the NFL and NFLPA agreed on a floor of $180 million, but there is a chance we see it creep close to $190 million.

Because of this, teams will be cash-strapped and have to make difficult decisions regarding veterans and how bullish they can be in free agency. One position that will be impacted the most is the running back position. With the NFL moving towards more committee-style approaches, fewer and fewer players are getting bell-cow contracts despite their talent.

Aaron Jones could be one of these players. While his work on the field has more than proven his worth, if no one is willing to pay out that money, he will have to take what is given. No one can dispute his talent. However, the change in philosophy and economic woes make 2021 a rough year when looking for a new landing spot in free agency.

As he hits free agency, where are some potential landing spots for Aaron Jones in 2021?

The Packers are in a win-now window in the latter part of Aaron Rodgers’ career. No one knows how vital RB Aaron Jones is to their success than the Green Bay Packers. In 2020, the Packers shocked everyone in the draft by taking a backup QB in the first round. Then, the Packers took RB A.J. Dillon from Boston College in the second round. This move was seen as the team planning for Aaron Jones’ loss in free agency once his contract expired.

While Dillon did show flashes of a Derrick Henry-esque style of play, Aaron Jones is one of the best RBs in the NFL. The two sides could work towards a new contract to keep Jones in Green Bay.

Spotrac has Jones with an estimated value of $14.6 million on a four-year, $58.47 million contract. The Packers could place the franchise tag on Jones, which could cost $11.1 million if they want to keep him around for one more season.

According to the site, Green Bay is over the cap by $5.8 million, making it hard to see them re-signing Jones to a long-term deal. While challenging, the Packers could find a way to keep Aaron Jones in Green Bay rather than letting him find a new landing spot in free agency.

The Miami Dolphins are a logical landing spot for Aaron Jones

They have cap space, a need at RB, and enter a window to make serious noise in the AFC East. If the salary cap holds at $185.5 million, Miami would be under the cap by $36.64 million — the ninth-most space in the NFL.

Going into the 2020 season with questions at the position, Miami deployed several running backs. Of those, the most successful was Myles Gaskin, a 2019 seventh-round pick from Washington. Gaskin played just 10 games and led the Dolphins in rushing with 584 yards on 142 carries, adding another 388 yards on 41 receptions with 5 touchdowns.

Miami has consistently been linked to one of the top running backs in the 2021 NFL Draft at pick 18. Odds are both Najee Harris from Alabama and Clemson RB Travis Etienne would be available. However, signing Aaron Jones in free agency would allow them to use that crucial pick on other needs.

If they want to see Tua Tagovailoa succeed, giving him a viable rushing game needs to be prioritized. After seeing what Aaron Jones was able to do for the Packers as their RB, he could be their top target in free agency.

Adam Gase is gone, and Robert Saleh needs help at the running back position. The Jets have plenty of cash to throw to help take the pressure off Sam Darnold or whoever will play quarterback. Currently, the organization sits second in projected cap space at $82.33 million.

The offensive line needs work. Say the Jets take one more shot with Sam Darnold and use the pick to take Penei Sewell. Pairing him with Mekhi Becton, the offensive line gets a whole lot better. Aaron Jones is one of the best at making something out of nothing in the NFL. If they do go quarterback with the second-overall pick as many expect, both Justin Fields and Zach Wilson will need a running back to rely on as they adjust to the NFL.