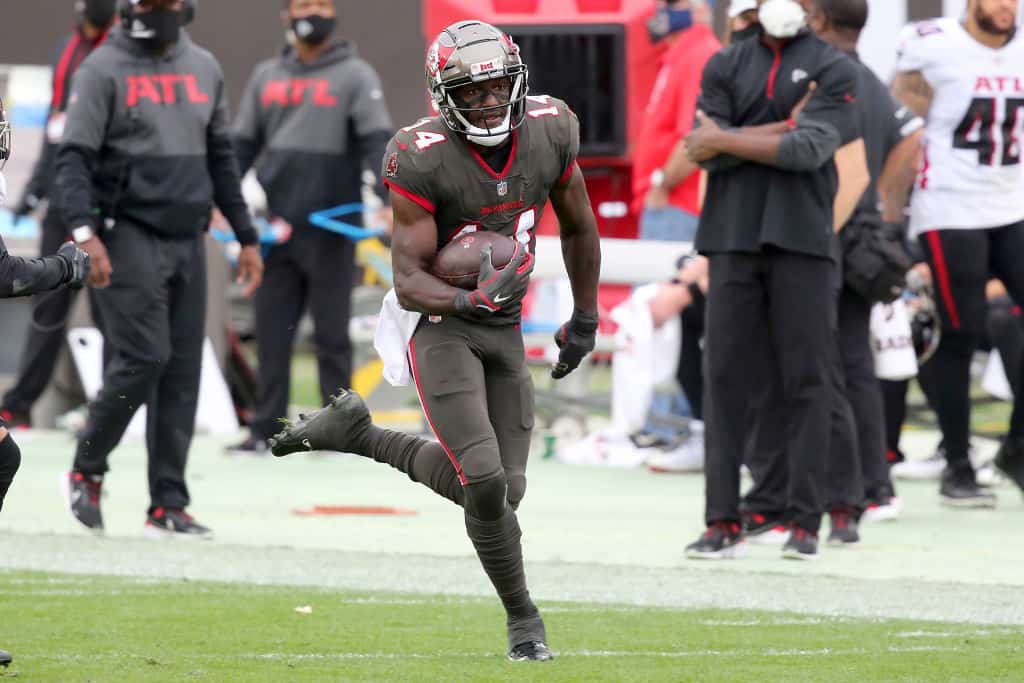 TAMPA, FL - JANUARY 03: Buccaneers receiver Chris Godwin (14) runs with the ball after making a catch during the regular season game between the Atlanta Falcons and the Tampa Bay Buccaneers on January 03, 2021 at Raymond James Stadium in Tampa, Florida. (Photo by Cliff Welch/Icon Sportswire via Getty Images)
What's in this article? Click to show
Chris Godwin’s contract season could have gone better based on expectations
Chris Godwin is going to being a steep asking price during free agency, and for good reason
Where could Chris Godwin sign during the 2021 free agency period?

Highlighting the 2021 free agency group of wide receivers is Tampa Bay Buccaneers WR Chris Godwin. His combination of a diverse route tree, age, and production will help him likely set the bar for free agent receivers this offseason. Can Tampa Bay bring the former Penn State product back, or will Chris Godwin be playing somewhere else in 2021?

With the signing of QB Tom Brady, the sky was the limit for Chris Godwin. His route tree on short-to-intermediate routes is amongst the best in the NFL. Add in Godwin’s 4.42 40-yard time, and he is a threat on any play.

Chris Godwin was lined up to at least repeat his breakout 2019 campaign season where he had 86 receptions for 1,333 yards and nine touchdowns in 14 games.

Godwin struggled to stay on the field, however, in 2020

Godwin emerged from Week 1 in the league’s concussion protocol, which cost him Week 2. Then a hamstring issue sidelined him for Weeks 4 and 5. And finally, a fractured finger suffered in Week 7 cost him one game.

Additionally, there was an unexpected challenger for targets added to the team midseason, Antonio Brown. Between the injury and Brown’s arrival, Godwin had less than 55 yards three times and more than six targets just twice during Brown’s first five games with the team.

However, Chris Godwin ended what could be his final regular season with the Buccaneers strong.

In Week 17, Godwin had five catches for 133 yards and two touchdowns against the Atlanta Falcons. Over the final three games, he had four touchdown catches, as he finished with 65 receptions for 840 yards and seven touchdowns over 12 games. It’s not the season Chris Godwin wanted, but his body of work speaks louder than one rough season.

Chris Godwin is going to being a steep asking price during free agency, and for good reason

Since coming into the NFL, Chris Godwin has been fantastic. Over his last three seasons, Godwin averaged 1,005 yards, 70 receptions on 100 targets, and 7.7 TDs per season. It’s relatively safe to say he outperformed his four-year, $3.28 million rookie contract.

Tamp Bay took a risk by not extending Godwin after his breakout season. If he repeated it, his next contract could have been even higher than what it will be. According to Spotrac, Chris Godwin currently has an estimated market value of around four-years, $68.8 million for $17.2 million per season. It would make Chris Godwin the ninth-highest paid wide receiver on a per-season basis.

Tampa Bay GM Jason Licht said he wants to retain the 24-year-old WR before the 2021 season and keep him with Tampa Bay for life.

“First of all, we love Chris. Everybody and anybody in the organization can tell you that Chris is a huge piece of this team and Chris is an impact player at the position. I’ve personally told Chris we want him to be here long-term and be a Buccaneer for life.”

The question is if the team wants to make a move like this with Mike Evans having a cap hit of $53.86 million over the next three years?

Where could Chris Godwin sign during the 2021 free agency period?

Unlike other free agents in the 2021 class, teams will need cap space to acquire Chris Godwin. He is not a roster-filler; he is the guy at the top of the depth chart.

The Buccaneers could bring Chris Godwin back

It’s not like there are any reasons for the team not to want Chris Godwin back. They know his talent and work ethic better than anyone. He has been an exemplary professional both on and off the field. Oh, and he is really good at football.

The question is, are the Buccaneers willing to spend roughly $32 to $35 million on two players? They have the space to do it. According to Over The Cap, Tampa Bay has an estimated $29.59 million in cap space heading into 2021, where it is projected to decrease to $176 million before rising in 2022.

A franchise tag could be possible for Godwin

The window to win is now for Tampa Bay with Tom Brady in his final seasons. If I were to bet on what I think will happen, Tampa Bay will franchise tag Chris Godwin. For Godwin or any player, it sucks. He has played exceptionally well. He played with 10 pins in his finger and only dropped one pass. To top it all off, he even publicly supported Antonio Brown’s signing, knowing what it could do to his production.

Due to the reduced salary cap, the franchise tag’s estimated value is $16.02 million. Presumably, that’s the lowest it will be for the foreseeable future. If they do this, it might sour relations for a potential 2022 extension. What is the price of winning worth to the Buccaneers? Is losing Chris Godwin worth it in the long run?

Godwin to the Colts checks a lot of boxes when looking at this fit. Indy is a team that values culture and is close to competing for an AFC title. Chris Godwin checks the culture box and makes them even better.

They have the cap space, without a doubt. The Colts have the fourth-most projected cap to work with at $62.31 million in 2021.

Also, Indianapolis needs wide receiver depth. T.Y. Hilton is aging and also going to be a free agent. From there, it is 2019 draft pick Parris Campbell who missed all of 2020 with a knee injury, and Michael Pittman Jr. Yes, they love Pittman, but he isn’t a number one option. He is a Vincent Jackson or a big body in the red zone style player. Chris Godwin, however, is a real number one option.

The Colts need a quarterback of the future and an alpha wide receiver to help them. Bringing on Chris Godwin in free agency would be a perfect fit for 2021 and beyond.

Adam Gase is gone, and this team needs a spark badly on offense. Jamison Crowder is a solid receiver but isn’t a home run threat like Godwin, who had 47 receptions of 15 yards or more since 2017.

What the Jets do with the second pick is a mystery. They could take Justin Fields and get their next QB. They could select Penei Sewell and pair him with Mekhi Becton, locking up their offensive tackle positions for the next 10 years. It’s possible they may even trade back and get value.

Whether it is Sam Darnold under center or Justin Fields or someone else, they need someone to throw the ball to in 2021. JuJu Smith-Schuster is another fit I can see working out well here. They have $72.59 million in cap space and need to do something with it to breathe some life into the worst-ranked offense of 2019.