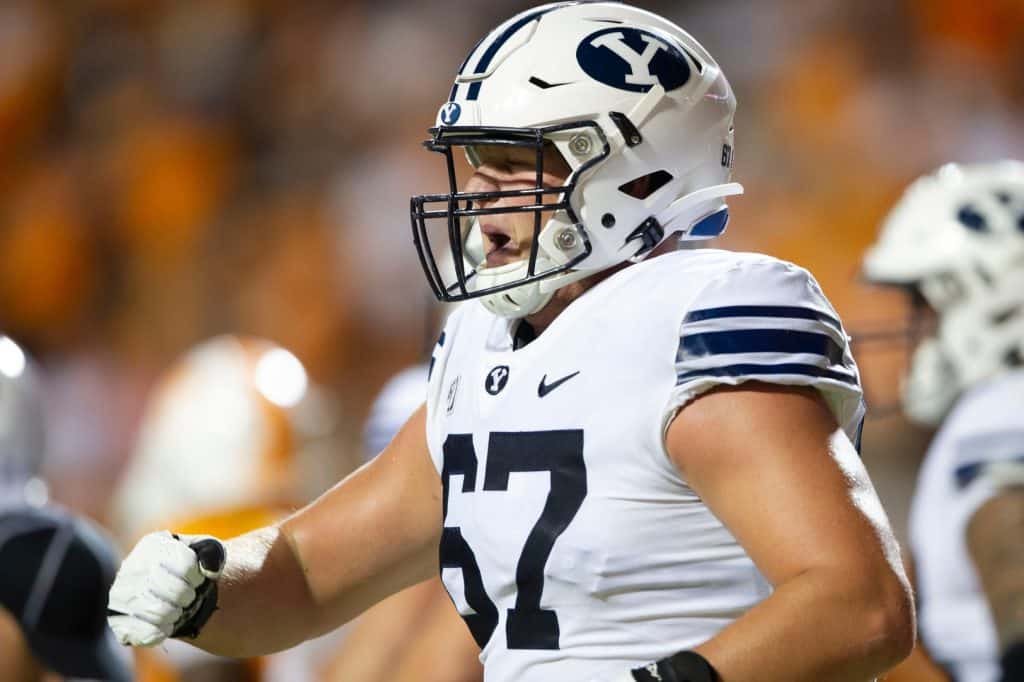 The offensive tackle class in the 2021 NFL Draft has long been known for its depth. Quality tackle options can be acquired all throughout Day 2, and solid developmental blockers are bound to trickle into Day 3 as well. At the moment, BYU offensive tackle Brady Christensen sits between those two groups in the NFL Draft. His recent production, meanwhile, has many re-evaluating his skill set. Can Christensen be a starter at the NFL level, and if so, will he face any schematic limitations? Let’s take a look at his NFL Draft profile.

Positives: Nice-sized, pass-blocking left tackle with good mobility. Fundamentally sound, sets with a wide base, and gets leverage on opponents. Stays square, keeps his feet moving, and anchors in pass protection. Makes outstanding use of angles in pass protection, keeps defenders in front of him, and knocks rushers from their angles of attack with violent hand punch.

Patient and seals defenders from the action as a position blocker. Stays with the action and plays with a nasty attitude, working to finish off defenders. Quick out to the second level with the ability to redirect and hit a moving target.

Negatives: Lazy and late with his hands. Not an overpowering run blocker who gets much movement.

Analysis: Christensen was a solid blindside protector for Zach Wilson, and he offers starting potential at the next level if he improves his playing strength and hand use.

Coming off a stalwart season as BYU’s left tackle, Brady Christensen is suddenly an intriguing prospect on the NFL Draft circuit. However, that upside wasn’t always apparent. Coming out of high school, Christensen was an unranked recruit on ESPN’s 2015 recruiting board. He originally signed with Air Force, but later committed to BYU.

Christensen’s football career wouldn’t begin with his arrival at BYU, however. As a follower of the Mormon faith, Christensen embarked on a two-year mission to Hamilton, New Zealand from 2015 to 2017. When Christensen returned, he was rostered as a freshman on the Cougars’ roster. It was then that the football work truly began.

As a recruit, Christensen measured in at around 6-foot-5, 250 pounds. When he returned from his mission trip, he still needed to add more weight to his frame. Thus, Christensen redshirted his first season with the BYU Cougars. He needed more time to acclimate to the college game, but the resulting starting stretch was absolutely worth it for the Cougars.

After his redshirt year in 2017, Christensen went on to start the next 38 games for the Cougars at left tackle. He started 13 games in 2018 and 2019 each and again started the entire season slate in 2020.

Christensen’s steady protection was a primary catalyst for the emergence of quarterback Zach Wilson, and the BYU offensive tackle was recognized as a consensus first-team All-American for his prowess.

After the 2020 season, in late December, Christensen officially announced his decision to forgo his senior season and declare for the 2021 NFL Draft. Now, the conversation turns to how he fits in a stellar tackle class.

Brady Christensen is a solid NFL Draft prospect, and yet, many mock drafts don’t have him cracking the top three rounds. There are a few reasons for this, however.

Christensen is an exceptional athlete, but he still has room to add more mass on his frame. Additionally, Christensen is older than the normal junior prospect, because of his earlier mission. He’ll be 24 years old heading into his rookie season. For a tackle prospect that needs some time to further develop, that may push him below other candidates.

Nevertheless, Christensen is fairly fundamentally sound. He also has good explosiveness out of his stance in the run game, and he has the anchor and physicality to engage defenders successfully.

Furthermore, although Christensen isn’t incredibly massive for his frame, he uses his length and power with proactivity. This makes him a sound investment on the line, from a mental perspective.

Brady Christensen can be a starter at the NFL level. His upside is relatively high too, but his age might limit the number of prime years a team can get from him. Nevertheless, Christensen has enough length and functional mobility to be effective.

His pass sets are smooth and refined, and he seeks out work in the running game. At the very least, Christensen profiles as a solid swing tackle, and he could be a quality starter by the end of his rookie contract.

At the same time, he also fills a need for teams who are simply looking for depth on the offensive line. Above all, that’s one need that never quite goes away across the league, and Christensen has the résumé to fill it with ease. If he can reach his maximum potential, Christensen could be a solid starting left tackle in the NFL.