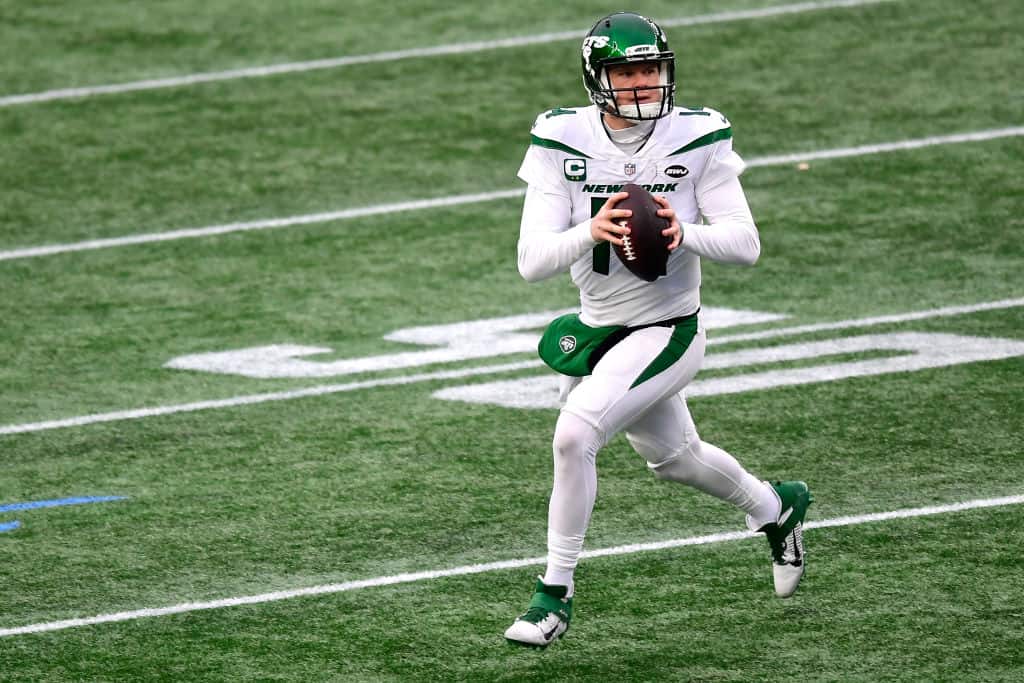 FOXBOROUGH, MA - JANUARY 03: Sam Darnold #14 of the New York Jets carries the ball during the first half of a game against the New England Patriots at Gillette Stadium on January 3, 2021 in Foxborough, Massachusetts. (Photo by Billie Weiss/Getty Images)
What's in this article? Click to show
Sam Darnold signed a four-year contract following the 2018 NFL Draft
What impact does Sam Darnold’s contract have on the New York Jets’ salary cap?
How does Darnold’s contract shape up for the Panthers and the Jets following the trade?
Want more NFL news and analysis?

Entering the 2021 NFL offseason, Sam Darnold’s future was always in doubt and resulted in him being traded to the Carolina Panthers. Let’s take a look at Sam Darnold’s contract and how he impacts the Jets’ and Panthers’ salary cap in 2021 and beyond.

After drafting Darnold No. 3 overall in the 2018 NFL Draft, the Jets signed him to a four-year contract worth a guaranteed $30.2 million. Darnold’s contract contained a $20 million signing bonus, $2.72 million in base salary, and $7.71 million in roster bonuses. Those roster bonuses are fully guaranteed and paid on the fifth day of training camp in 2019, 2020, and 2021.

Darnold has at least one more year remaining on his contract

With the 2021 offseason kicking into gear, the Jets had a tough decision regarding Darnold and his contract. As part of all rookie contracts, teams have the option to exercise a fifth-year. The deadline for that decision with Darnold is May 3rd, 2021. As the Carolina Panthers traded for Darnold, that decision passed to Matt Rhule and Scott Fitterer.

While discussion around other quarterbacks in the 2018 NFL Draft involves a potential extension for the likes of Josh Allen and Lamar Jackson, the focus for Darnold was on whether the Panthers would exercise the fifth-year option. According to Jonathan Jones of CBS Sports, the Panthers chose to exercise that option. Due to this,  Darnold’s salary in 2021 will be fully guaranteed.

As Darnold has played over 75 percent of the Jets’ snaps in all three seasons, he is eligible for the third-highest salary tier. That number will be approximately $18.86 million for the 2022 season.

What impact does Sam Darnold’s contract have on the New York Jets’ salary cap?

The structure of Darnold’s contract has led to his salary cap hits being reasonably balanced. Darnold accounted for $5.5 million against the cap in his rookie year. That has risen by roughly $1.5 million per year in the three following seasons. In 2021, The Jets would have taken on a salary cap hit of $9.8 million for Darnold’s services.

How does Darnold’s contract shape up for the Panthers and the Jets following the trade?

When a player is traded, any prorated signing bonus remains with his original team. The new team is then left responsible for the remaining salary and bonuses owed to the player in that season and any future seasons.

After trading Darnold what dead money is left on the Jets salary cap?

Following the trade, the Jets receive some salary-cap relief. The $5.02 million in prorated bonus remains with the Jets. However, the remaining $4.77 million in base salary and roster bonus is transferred to the Panthers.

What salary would a team trading for Sam Darnold and his contract acquire?

Darnold always presented a cheap one-year experiment for a team willing to trade for him. With just $0.92 million in base salary and $3.85 in roster bonus, Darnold only accounts for a total of $4.77 million against the cap. Additionally, as the Panthers have traded for Darnold ahead of the May 3 deadline, they had the chance to exercise the fifth-year option.