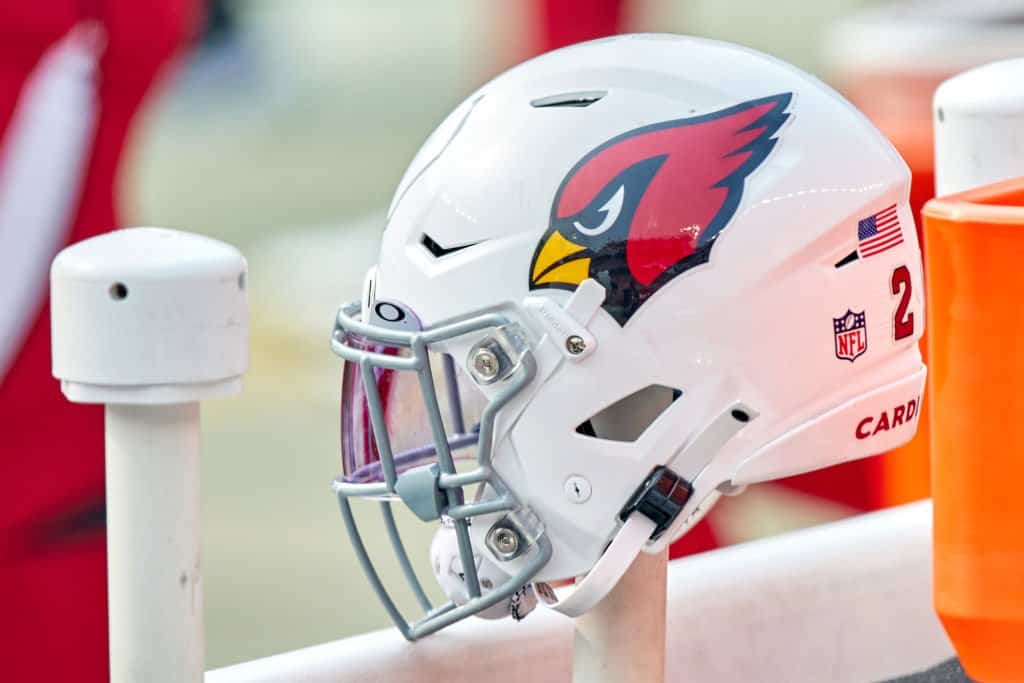 SAN FRANCISCO, CA - SEPTEMBER 13: A detail view of an Arizona Cardinals helmet is seen during the NFL game between the San Francisco 49ers and the Arizona Cardinals on September 13, 2020, at Levi's Stadium in Santa Clara, California. (Photo by MSA/Icon Sportswire via Getty Images)
What's in this article? Click to show
Cardinals Pre-Senior Bowl 7-Round 2021 Mock Draft
Cardinals 2021 NFL Mock Draft pick-by-pick analysis
Want more 2021 NFL Draft prospect news? Want to do your own mock draft?

The Arizona Cardinals disappointed in the eyes of many this season, missing the playoffs in year two of the Kyler Murray and Kliff Kingsbury experiment. Things are still trending upward, so this pre-Senior Bowl Cardinals 7-round 2021 NFL Mock Draft attempts to propel Arizona to the promised land.

Arizona has needs on both sides of the football. They’ve done an insufficient job supporting Murray, playing a mediocre wide receiver corps and poor offensive line. Their defense has a handful of young talents, but aging veterans like Patrick Peterson may not wear the red and white for much longer. Deciding which side of the ball to prioritize will loom large in the NFL Draft come April.

DeAndre Hopkins is elite, but the rest of Murray’s targets frequently fall short. Andy Isabella is yet to outplay his draft slot, and Larry Fitzgerald may be on his way out. Christian Kirk is a decent player but doesn’t stand out in the current offense. This leaves Kingsbury with an important question — who do you turn to when Hopkins gets shut down?

Smith, the 2020 Heisman Trophy winner, may very well be the answer Arizona’s been looking for. He’s been uncoverable for much of the season and put up numbers that surpassed previous Crimson Tide greats such as Amari Cooper, Julio Jones, and Calvin Ridley.

Smith brings elite separation skills and a nuanced style of play that makes him a reliable target. He’s also an excellent athlete and can take the top off the defense when necessary.

The versatile threat does not come without questions, though. He’ll likely be only the fifth Heisman winner not selected within the first two overall picks since 2011. Receivers rarely go that high anyway, but Smith has a lingering concern that could legitimately affect his draft stock. A generous 180 pounds, Smith is tiny. Few have entered the league with his 6-foot-1 frame at that weight, and even fewer have found success.

Whether this keeps Smith in the slot is to be seen, but the rest of his game translates well. He’s a pro-ready senior that dominated SEC defensive backs destined for the NFL. Giving Murray another sidekick will help the offense find its consistency next season.

An excellent athlete under center can mitigate foul offensive line play, but the Cardinals are still in severe need of starting-level linemen. Arizona’s interior offensive line frequently fell apart this year and killed numerous drives. Mason Cole’s struggles have put Murray in unforgiving situations time and time again. With the 49th overall pick in this Cardinals 7-round 2021 NFL Mock Draft, the Cardinals find his replacement.

Dickerson’s medical history will scare teams from taking him on Day 1, but his play is worthy of immediate playing time. A Florida State transfer, Dickerson found a home at Alabama and quickly became a vital locker room presence. He’s played all five spots on the line but will undoubtedly remain inside at the next level.

Additionally, the offensive line is worse on the inside than it is at tackle. D.J. Humphries played well this year, and Josh Jones, should he stay at tackle, offers potential.

The combination of Justin Pugh, Justin Murray, J.R. Sweezy, and the aforementioned Cole, on the other hand, failed to get the job done. This hurt production for Kenyan Drake and Chase Edmonds. It also collapsed pockets and forced scrambles from the former number one overall pick.

His ability to win with power and technique in the run game often makes up for his athletic profile limitations. One would like to see more fluidity, but given his injuries to his knees and ankles, this concern is expected. Dickerson is still able to utilize a strong base to stifle bullrushes. He may end up at guard if Lamont Gaillard earns his spot at center, but he should start from the jump either way.

Newsome has yet to see the buzz that many other prospects have so far in the draft process. However, he is on the rise after a fantastic season, and constitutes a value pick in this Cardinals 7-round Mock Draft. He earned first-team All-Big Ten honors and is confident enough in his stock to leave Northwestern after three seasons, a rarity under coach Pat Fitzgerald.

Newsome showcases good ball skills, even if he only has one career interception. There’s upside left to be untapped, as he’s shut down Big Ten targets consistently. Newsome left the Big Ten championship game with an injury, but his availability for the combine isn’t in doubt.

Arizona’s defensive backs are generally young and inherently raw, and that may increase this offseason. There’s no guarantee Patrick Peterson returns, plus it is clear he’s past his prime. Byron Murphy Jr. looked better in his sophomore season. If he requires a new partner, Newsome is a high-floor candidate that could join him. At the very least, he will likely outperform Dre Kirkpatrick’s troublesome 2020.

The first of two Georgia Bulldogs taken in this Cardinals 7-round 2021 NFL Mock Draft, LeCounte does not offer the promising potential others in this class possess. Where he stands out, however, is his incredibly high floor and football IQ.

The veteran leader of a talented Kirby Smart secondary, LeCounte is rarely out of position and a good communicator on the back end. Where he lacks in dynamic athleticism, he makes up for with good fundamentals and strong instincts that frequently lead to turnovers. He can run quarters concepts effectively and hold his own in cover 2. Some suspect he’ll make his living in the box once he’s drafted.

He’ll serve as quality depth and a leader in the film room where he ends up playing. Backing up a star like Budda Baker or inexperienced defensive backs like Jalen Thompson or Deionte Thompson, LeCounte will make an impact, even without a ton of playing time. He may be able to contribute on special teams as well.

His lack of potential will likely see him drafted on the draft’s third day — perhaps later than where I selected him while making this mock draft — but his football acumen will ensure he’s drafted. Bringing in veteran-like intangibles at a fraction of the cost will make general manager Steve Keim happy.

The Cardinals may not have a surplus of draft capital, but they can still scavenge a handful of impactful selections. This Cardinals 7-round 2021 NFL Mock Draft’s final pick is a prospect who doesn’t yet have a clear NFL projection.

At 6-foot-3, 280 pounds, Herring may see his future play out as a 3-4 defensive end or a 4-3 edge rusher. Arizona may employ him in multiple roles—they certainly have a history of selecting hybrids.

Herring would serve as depth for an already young front seven as he works on his game. He has active hands and inspiring athleticism for his size, both of which support the notion of him aiding the pass rush, perhaps with some help from future Hall of Fame pass rusher Chandler Jones.

Where he struggles is his consistency, bend, and ability to play the run. He’d be a tad small for his position if moved inside, and that strength disadvantage could spell trouble.

He’ll likely be a low-priority rotational defender, but there’s merit in how malleable he is. He’s a Day 3 flier that can fill in at multiple spots and help keep this Cardinals defense afloat if disaster strikes.