By Lucas Ellinas
May 5, 2021
What's in this article? Click to show
James Robinson had a great season for an undrafted rookie
Robinson’s advanced metrics don’t quite match his box score
If Etienne lives up to the hype, he should be an upgrade over Robinson
Etienne being better than Robinson doesn’t mean Jacksonville should have drafted him
Why did Jacksonville take Etienne?
Want more 2021 NFL Draft prospect news? Want to do your own mock draft?

The Jacksonville Jaguars started the 2021 NFL Draft exactly how everyone expected they would, taking Trevor Lawrence with the first overall pick. Their next selection, however, was significantly more confusing. At No. 25 overall, the Jaguars drafted Lawrence’s former Clemson teammate, RB Travis Etienne. They did so despite the apparent success of their incumbent starter, James Robinson, last season. The data shows that this decision might not have been the smartest move.

James Robinson had a great season for an undrafted rookie

Drafting Etienne might not seem so strange if Robinson hadn’t been so successful during his rookie season. In 2020, Robinson totaled 1,070 yards on the ground, tied for fifth in the NFL. He also caught 49 passes for 344 yards and scored 10 total touchdowns.

Those statistics become even more impressive when you consider that Robinson accrued them in just 14 games. Not bad for an undrafted free agent out of Illinois State. On the surface, the Jaguars drafting an RB to replace him after such a productive season doesn’t make much sense. On the contrary, the advanced metrics show that Robinson’s success wasn’t as impressive as the box score makes it seem.

While Robinson’s traditional statistics were excellent in 2020, the advanced metrics weren’t so kind to him. To explain what I mean, let’s look at Robinson’s Offensive Value Metric (OVM) grade. The OVM is a grading system created by the (Bx) Movement to measure players based on how much value they provided to their offense based on their role within it.

In his rookie season, Robinson received an OVM grade of 7.79. Now, running back grades tend to be lower on average than those earned by other positions. Still, that grade isn’t particularly impressive even by running back standards. Of the 55 qualifying players at the position, Robinson’s grade ranks 26th.

To be fair to Robinson, that isn’t a terrible performance. In fact, it’s far better than you would expect from an undrafted free agent. Nevertheless, a team might want more from their starting running back.

Explaining why Robinson’s overall grade was low compared to his box score statistics requires an in-depth examination of the advanced metrics involved in calculating a running back’s OVM grade.

As you might expect given his mediocre overall grade, most of Robinson’s advanced metrics ranked around the league average. He averaged 4.5 yards per carry (0.18 yards more than expected according to the NFL’s advanced metrics) while facing eight or more defenders in the box on 20.42% of his snaps.

His efficiency rating, calculated by taking the number of yards of physical distance a running back ran for each statistical yard they gained, was 3.65.

Each of those statistics ranks at approximately the midpoint among all other running backs last season. They paint a picture of a player who wasn’t terrible in any particular area but wasn’t spectacular in any of them either.

The graph below shows his grades from each week of the 2020 season, marked by the black dots. For comparison, the yellow line represents the average regular-season grades from all running backs last season. 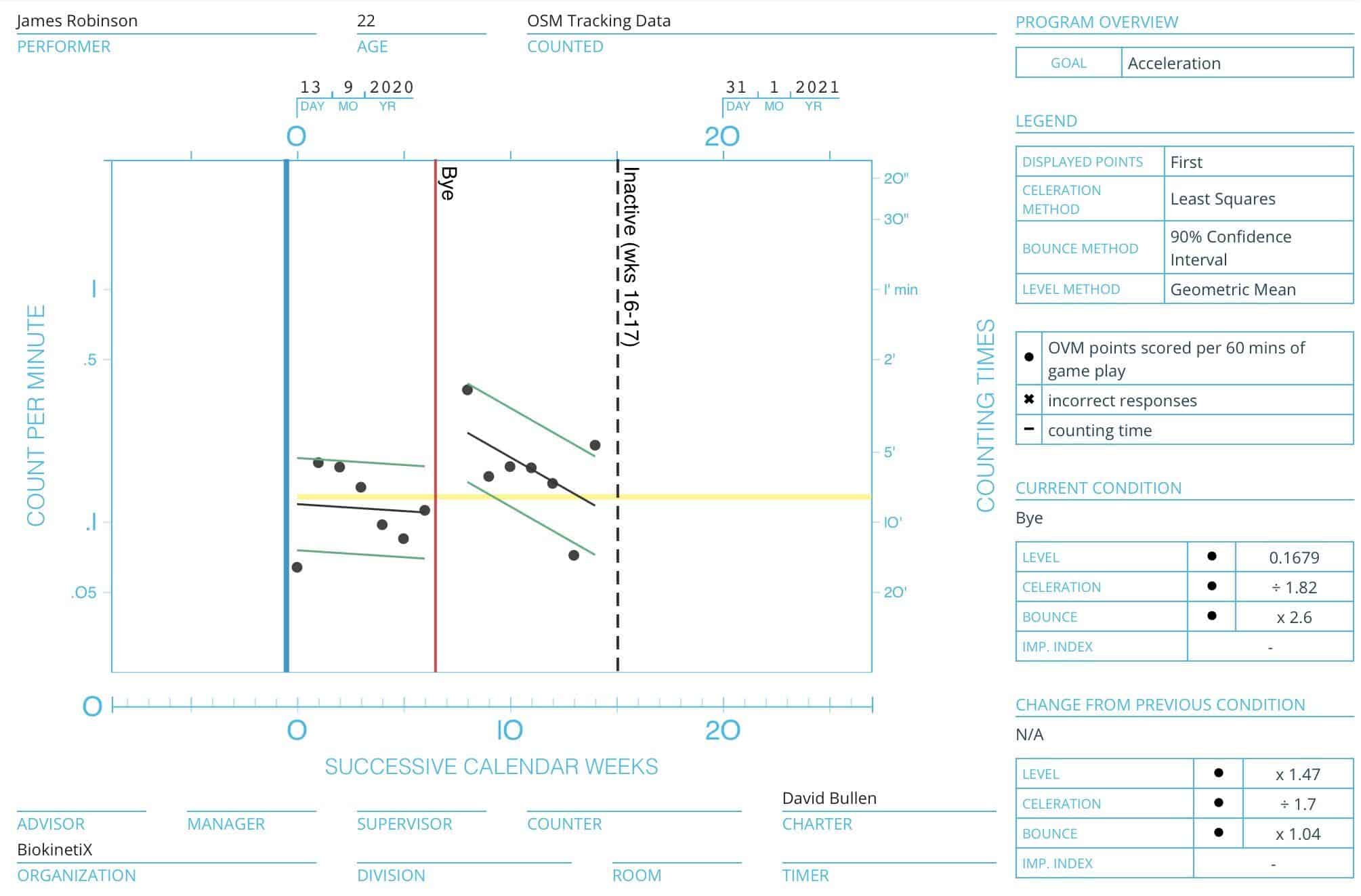 Naturally, that level of inconsistency isn’t a great sign for Robinson. While having the occasional outstanding performance is better than never having them at all, it would obviously be better for Jacksonville if he could cut out the terrible ones.

In some ways, though, these grades are actually a positive sign for Robinson. If he performs at a level closer to his peak on a more regular basis, he could be an elite player. Unfortunately, becoming a more consistent player is easier said than done.

If Etienne lives up to the hype, he should be an upgrade over Robinson

The data shows that, while Robinson significantly outperformed his draft status, he was far from an elite RB for the Jaguars in 2020. Etienne, meanwhile, has the potential to be a star in the NFL. Some analysts considered him to be the top running back in his class. A glance at his college statistics reveals why many were so high on him.

During his four years at Clemson, Etienne totaled 4,952 rushing yards and 70 touchdowns on the ground. And while he didn’t catch many passes during his first two seasons, that changed during his junior and senior years, when he gained 1,020 yards through the air.

All of those statistics are even more impressive when you consider that they include a shortened 2020 season. Combine that historical success with his elite athleticism and it becomes obvious that Etienne has the potential to be an elite player at the next level. It is more than possible that he will become the starting RB for the Jaguars next season.

Of course, even if Etienne is an upgrade over Robinson, there are several reasons to think that drafting him wasn’t the right decision. To start with, Jacksonville had other needs that could have been addressed with the 25th pick. You generally don’t end up with the No. 1 overall pick in the draft without having several holes on your roster, and the Jaguars were no exception.

Quarterback was their most obvious need, but the team also needed help at left tackle, tight end, in the secondary, and on their defensive line. Furthermore, they could have probably stood to add another wide receiver as well.

On top of that, drafting a running back in the first round is considered unwise by many analysts, myself included. That’s because more value at the position can be found later in the draft. Using first-round picks, even late ones, on a running back is a right generally reserved for elite teams looking for a key piece to push them over the edge.

While the selection of Trevor Lawrence means the Jaguars’ future seems bright, they certainly aren’t in that position yet.

Why did Jacksonville take Etienne?

Given all of the statistics and concerns we have discussed thus far, why did the Jaguars take an RB in Round 1?

Well, Jacksonville has known they would be taking Etienne’s former teammate, Lawrence, for some time. Perhaps they asked their new star quarterback what would be most helpful with their other first-round selection.

They almost certainly asked Lawrence about Etienne, and it seems likely that he only had good things to say about the man he shared the backfield with for three seasons. As a consequence of the two players’ comfort with each other, combined with their own individual talents, it is entirely possible Etienne will have a great rookie season.

Some fans and analysts will see that success and use it to justify his selection. However, the problem with the pick was never Etienne himself, but rather where he was taken. Using a premium pick on a low-value position (one that isn’t even of particular need) generally isn’t wise.

Looking back years down the line, Jacksonville might find they would have been better served by taking a player at a more valuable position and sticking with Robinson as their starter for the near future.

Sources: Byron Leftwich in contract discussions with Jaguars, expected to be hired as new head coach

Could Sean Payton return to the Dallas Cowboys in a year?