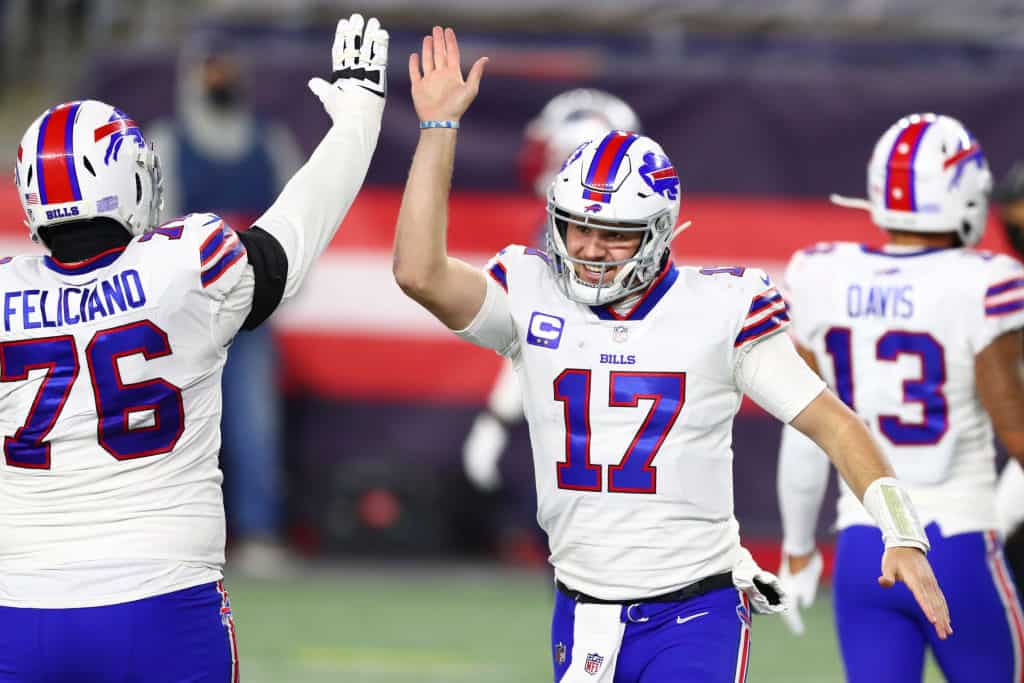 FOXBOROUGH, MASSACHUSETTS - DECEMBER 28: Josh Allen #17 of the Buffalo Bills high-fives Jon Feliciano #76 during the second half against the New England Patriots at Gillette Stadium on December 28, 2020 in Foxborough, Massachusetts. (Photo by Adam Glanzman/Getty Images)
What's in this article? Click to show
The Bills project to be around $3 million under the salary cap in 2021
Buffalo has a handful of potential options to release players
The Bills have players they can extend or restructure to create cap space in 2021
Want more NFL news and analysis?

After a dream run to the AFC Championship Game in the 2020 NFL season, what is the Buffalo Bills’ salary cap situation heading into 2021? Let’s take a look at what the Bills’ salary cap expects to be and how much cap space they will have in 2021.

As of February 27th, the 2021 salary cap projects to be around $185 million. The Bills will carry over $3.8 million in cap space to the 2021 season. Therefore, the Bills’ current salary cap will approximately be $188.8 million.

As it stands, the Bills have just under $182.7 million in commitments to their top 51 highest-paid players, with an additional $2.9 million in dead money. Thus, the Bills currently have around $3.2 million in salary cap space heading into 2021.

Buffalo has a handful of potential options to release players

After falling agonizingly short of making the Super Bowl, the Buffalo Bills look to go further in 2021. However, they have areas of weakness they need to address. To do this, they need to create cap space this offseason.

Is John Brown set to be surplus to requirements in Buffalo?

John Brown may find himself the odd man out in the Buffalo Bills’ wide receiver room. Brown will count $9.5 million against the Buffalo Bills’ salary cap in 2021. However, just $1.6 million of that would be left in dead money if he were to be released. Therefore, the Bills could clear $7.9 million by releasing Brown in the coming weeks.

With Stefon Diggs, Gabriel Davis, and Cole Beasley all under contract, trimming down the wide receiver room makes a lot of sense.

Could the Bills look for a refresh on their defensive line?

The Bills’ defensive line struggled to make an impact when they needed to in big games this year. The difference between the pressure the Bills and Buccaneers got against the Chiefs was a wide margin. Therefore, the Bills need to seriously consider trimming back their defensive line and adding new talent.

The 2021 season sees the Bills with many players with high salary cap numbers and limited dead money. Here are some names we could see make way on the Bills’ defensive line in the coming weeks.

Releasing all four could save as much as $27 million. However, even just releasing a couple and keeping the remainder would create around $12-15 million.

The Bills’ options when it comes to saving cap through extensions are somewhat limited. However, they could open up around $20 million reasonably quickly between a few extensions and some small restructures.

Are Stefon Diggs or Cole Beasley worth an early extension?

Both Stefon Diggs and Cole Beasley played superbly in 2020. They were big parts of the reason the Bills’ offense took a leap last year. In 2021, Diggs will count $13.5 million against the cap, while Beasley expects to count $7.4 million. Diggs has three years remaining on his deal; Beasley has two still. However, extensions for both now could save cap space and set the tone for the Bills in 2021 and beyond.

Diggs’ cap numbers in the next three seasons average out to just under $13 million — a great price for a player of his caliber. Additionally, the Bills could add a couple of years to their star receiver’s deal and save as much as $9.5 million in 2021 salary cap space in the progress.

At 28, the Bills could ensure they are paying the bulk of guaranteed money on a new deal while Diggs is under 30. Therefore, they would reduce the potential risk of extending Diggs in a year or two.

Beasley has cap numbers totaling $15 million in the next two seasons. At 32, the Bills will likely not be looking to extend him far into the future. However, they could add a year or two to the deal and save around $3.5 million in the process.

Keeping together a center/quarterback pairing for the long term is always a strategy a team should consider. Josh Allen and Mitch Morse had a good rapport. While Allen is still relatively cheap, locking up his center makes a lot of sense. Extending Morse in the coming weeks could save the Bills as much as $5 million in 2021 salary cap space.

The Bills need to decide on their defensive backfield

Micah Hyde and Jordan Poyer both expect to become free agents after the 2021 and 2022 seasons, respectively. Both players are 30+ years old, and the Bills may not want to commit to them for the future. However, extending both could save the Bills a total of around $7 million in salary cap space in 2021. Of course, their asking price is key, but both names remain a potential option for an extension.

The Buffalo Bills gave Micah Hyde a two-year extension on March 5. His cap number in 2021 is not expected to change much, and the new contract is worth $19.25 million.

Extending Josh Allen in 2021 does little to save cap space

The Bills could also extend Josh Allen this offseason. However, with savings of less than $3 million against his cap number, it would not be a move for immediacy. Instead, the Bills would be looking to get ahead of potential big-money deals for Lamar Jackson and Dak Prescott, which could set a market for Allen.

The Bills have a number of contracts they could restructure in 2021 to create salary cap space. If they do not want to extend the likes of Diggs or Beasley, both of those could have their contracts restructured. However, the prime players to be restructured in terms of having a long-term deal and a high cap number are Tre’Davious White and Dion Dawkins.