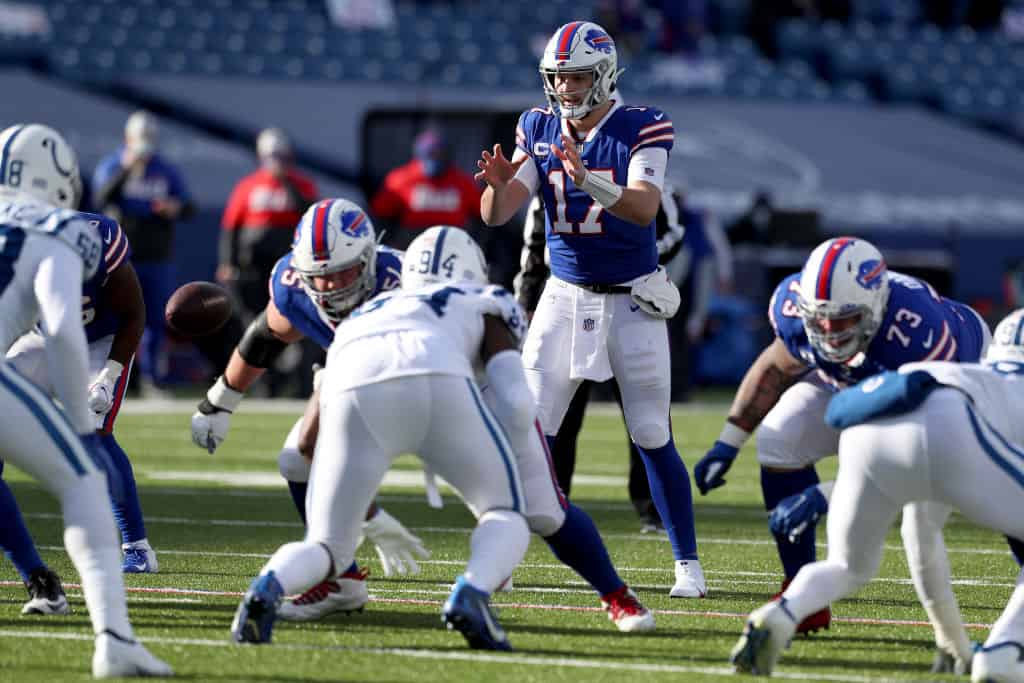 ORCHARD PARK, NEW YORK - JANUARY 09: Josh Allen #17 of the Buffalo Bills waits for the snap during the first quarter of an AFC Wild Card playoff game against the Indianapolis Colts at Bills Stadium on January 09, 2021 in Orchard Park, New York. (Photo by Bryan Bennett/Getty Images)
What's in this article? Click to show
Josh Allen likely has two more years remaining on his rookie contract
When may the Bills look to extend his deal?
How much could Josh Allen earn on his next deal?

The 2020 NFL season has seen Buffalo Bills quarterback Josh Allen break out, increasing the chances he signs a contract extension in the upcoming offseason. What is the current situation regarding Allen’s contract? When can he be extended, and what might that extension look like?

Following his selection as the seventh overall pick in the 2018 NFL Draft, Josh Allen is in the third year of his rookie contract. Allen’s contract is a four-year, $21.12 million deal. He received a $13.5 million signing bonus as part of that contract. Additionally, all first-round draft picks have a fifth-year team option in their contracts. Teams have a window between the end of that player’s third season and May 3 to exercise their option.

How much is Josh Allen set to earn in the remainder of his rookie deal?

Allen was named to the Pro Bowl for the first time following the 2020 season. That is highly significant as it means that Allen’s fifth-year option will be paid the equivalent of the 2021 transition tag. That transition tag for a QB is currently estimated to be $21.2 million.

Allen will also earn a further $3.5 million in the fourth year of his contract. $920,000 in base salary, and $2.62 million as a roster bonus. In total, Allen is set to earn approximately $24.7 million over the next two seasons.

When may the Bills look to extend his deal?

Rookies can’t extend their contract until they have been in the league for three years. Therefore, the Bills can look to extend Allen any time from the end of this season. With the current uncertainty around the NFL financially, we could see teams waiting for an extra season to extend some players.

How much could Josh Allen earn on his next deal?

The most likely scenario here is that Josh Allen signs an extension in one of the next two offseasons. If he signs a four-year extension in 2021, he will be committed to Buffalo for six seasons.

Patrick Mahomes signed a 10-year contract extension worth $45 million per year as the base price last offseason. However, Mahomes signed that deal after achieving two things Allen has not. Mahomes was named MVP of the league in 2018 before winning the Super Bowl in his third season.

Unless Allen can lead the Bills to a Super Bowl victory in the next few weeks, he will likely see a deal lower than that of Mahomes.

Which other QB contracts can we judge Allen against?

Some better comparisons for Josh Allen are Russell Wilson, Deshaun Watson, and Carson Wentz. Allen is significantly younger than Wilson and has not suffered a major injury like Watson and Wentz. However, Allen did have his struggles in his first two seasons. He has performed well in his third season but has only one high-quality season to his credit.

When it comes to their annual salary, Watson earns $39 million, Wilson $35 million, and Wentz $32 million. The expectation for Josh Allen is that he would sit somewhere around the same value as Watson.

What could Josh Allen’s contract be worth?

According to Spotrac, Josh Allen has a market value of around $40 million per year on a four-year contract extension. Allen’s reputation has grown in the most recent NFL regular season. He further enhanced that by becoming the first Bills QB since Jim Kelly to win a playoff game.

$40 million a year may seem steep for a QB who has one high-quality season on his résumé. However, with no major injury history and clear development as a QB, that seems like the right price for Allen.

A four-year, $160 million extension is what I would expect to see Allen sign. The structure of the deal will be intriguing, as the Bills look to keep Allen’s cap hit as low as possible in 2021. We may see a small signing bonus, accompanied by swarms of guaranteed money and some roster bonuses in each of the next three or four seasons.