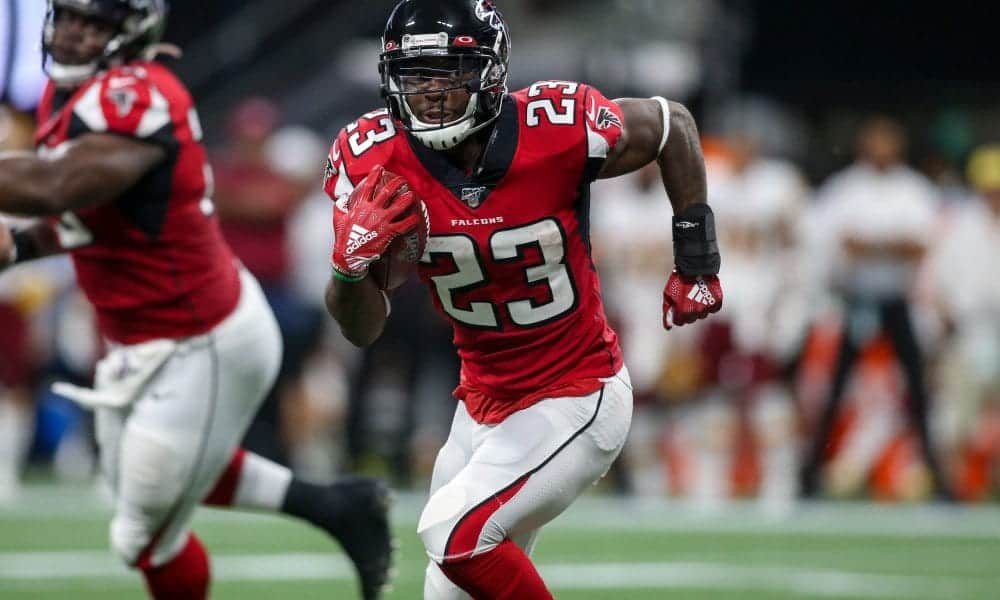 Welcome to the latest entry in our new weekly series, where we have some of our fantasy analysts take turns picking who you should target on the waiver wire, this time for Week 11. This mock draft format allows for some quick commentary and is just a fun way for us to deliver this generally boring content in a new and exciting way. Let us know what you think! But for now, on with the Week 11 fantasy waiver wire mock draft!

Just like before, here are the constraints for this column. This is for a 12-team, 1QB, half-PPR, two-flex league, and players picked must be owned in fewer than 40% of leagues on ESPN. Got it? Good!

“With Ito Smith landing on IR and Devonta Freeman leaving the game early with a foot injury, Brian Hill stepped in and received 20 carries and a receiving TD. Next week is a Carolina defense that isn’t ferocious. Snag Hill for a flex play with potential to be the main guy going forward if Freeman is out an extended amount of time.” – Corey Ashburn, PFN Fantasy Analyst

“After getting targeted like his team’s primary receiver in Week 10, it looks like the New York Giants may start to incorporate Darius Slayton during their Week 11 bye. Slayton’s 10 receptions for 100+ yards and 2 TD against the New York Jets was definitely his ceiling for the year, but he should remain a steady part of the offense with recent injuries to Evan Engram and Sterling Shepard. His usability to fantasy owners opens up during the fantasy playoffs where he faces the Philadelphia Eagles, Miami Dolphins, and Washington Redskins in Weeks 14-16.” – Andrew Jordan, PFN Fantasy Analyst

“I was surprised to see Derrius Guice still under the 40% threshold in ownership but expect that to drastically change this week as he returns to the field since his Week 1 injury. It doesn’t take much insight to say that Redskins quarterback play has been dreadful, making the rushing game the only real option to maintain possession. However, efficiency has been severely lacking. The addition of Guice to the backfield gives the Redskins a much-needed change of pace and threat in open space.”

“I can see them utilizing him in the screen and short passing game to get him extra touches and allowing his athleticism to make the plays in open space. This creates easier throws for Dwayne Haskins and gives Guice a higher ceiling in PPR formats. That’s a win-win for everyone involved.” – Tommy Garrett, PFN Fantasy Analyst

“Now, let me be clear. Kalen Ballage is not good at football. However, in fantasy football volume is king, and Ballage certainly received a ton of it this past Sunday against the Indianapolis Colts.”

“Ballage had 24 touches against the Colts and now gets a matchup against the Buffalo Bills, who have struggled mightily against running backs. This is as ugly as it gets, but take the production regardless of how it comes.” – Eric Frosbutter, PFN Fantasy Analyst

–Some old picks mixed with some new ones, just the way I like it. Hill is the clear #1 with the potential injury to Devonta Freeman, and the scarcity of solid starting RBs these days, but I like Darius Slayton a lot this year. He’s got a good rapport building with young QB Daniel Jones and could be a league winner as we look to the playoffs and beyond. Definitely worth an add if he’s still available in your league this week.

“Hunter Renfrow has carved out a niche roll in the Oakland Raiders’ offense and has seen an uptick in production as of late, with 4+ catches in each of the last three games. It’s not a special add, but they play the worst team in the NFL (Cincinnati Bengals) at home next week.” – Corey Ashburn

“This admittedly took longer to figure out than we thought, but it seems J.D. McKissic is, in fact, the Detroit Lions RB to roster in fantasy football over rookie Ty Johnson. It won’t always be pretty, and it sure won’t be efficient, but double-digit PPR points in back-to-back weeks are hard to ignore with the current state of the RB position out on the waiver wire. His receiving game involvement provides him a hopefully safe floor for owners that need to take the plunge.” – Andrew Jordan

“How is this still a thing? I’m going to keep beating this drum as long as I have to.”

“We see what happens when a starting running back gets hurt in a rushing focused offense and the value the backup has. Alexander Mattison is getting work even behind a healthy Dalvin Cook, who is in the running for the rushing title. In Sunday’s win, he still tallied 53 yards while Cook racked up over 180 in total. Mattison also had a goal-line touchdown that was unfortunately called back due to a penalty. If Cook gets hurt, Mattison becomes the most valuable handcuff in all of fantasy.” – Tommy Garrett

“Don’t look now, but Randall Cobb is quietly becoming relevant in the Dallas Cowboys’ offense. In the past two games, Cobb has a total of 12 receptions on 16 targets for 141 yards and a touchdown. Sunday night was the first touchdown for Cobb since Week 1 and the first time he’s gone over 100 yards this season.”

“The Cowboys schedule gets tough, but this could benefit Cobb’s fantasy outlook. With Amari Cooper getting the majority of opponents’ attention, it’s possible for Dak Prescott to look Cobb’s way even more.” – Eric Frosbutter

–I agree with Tommy, how is Mattison still available? Seriously, go fix that first, then look for some depth pieces for your bench to make the playoff push in the other guys. Cobb looked solid this week, and it definitely looks like Dak Prescott looks for him early and often, making him a solid Week 11 waiver wire target in all leagues.

“First off, Mason Rudolph is bad. That being said, his college teammate James Washington provides some comfort for the passer and has received 17 targets over the last three weeks. The Pittsburgh Steelers’ upcoming schedule is fantasy gold with Cleveland, Cincinnati, Cleveland again, and Arizona. Washington could be a completely wasted pickup, but he might provide you with a nice flex down the stretch.” – Corey Ashburn

“We’ve heard a lot about the New York Jets schedule down the stretch as it relates to Sam Darnold (who I nearly took in this spot in place of Thomas). Facing off against Washington, the Raiders, Bengals, Dolphins, and Ravens to close out fantasy football championship week, Thomas could extend his career with a good showing over that stretch. Now that Chris Herndon is injured, we should expect more three-wide looks from this offense as Adam Gase and company fight to retain their jobs and work with GM Joe Douglas to dangle more established players at the trade deadline for years to come.” – Andrew Jordan

“Talk about maximizing your opportunity. Hardman took his lone target from a jumping Partick Mahomes and turned on the afterburners for a 63-yard touchdown in Sunday’s loss to the Tennessee Titans. Although Hardman isn’t going to get a lot of targets in this offense, the WR3 for a healthy Mahomes led offense is a valuable asset to have. In his current role, he is a WR3/Flex with high upside. ” – Tommy Garrett

“Be on top of things a week early and go pick up David Njoku before he becomes a top priority in Week 12. Njoku is eligible to return then and given the struggles of the Cleveland Browns’ offense and injuries to their tight ends, it’s a safe bet that Cleveland will call him up to the active roster.”

“Njoku could easily be a TE1 down the stretch, and if you needed more convincing, just know that the Browns will play the Miami Dolphins in Week 12.” – Eric Frosbutter

–Another good set of choices here, but my favorite has to be the stash of David Njoku. We saw injuries to George Kittle, Austin Hooper, Chris Herndon, and Evan Engram this week, making an already depleted tight end position look like a barren wasteland. You could do worse than a newly healthy Njoku as your squad looks to the playoffs. He’s a great target if your bench has the room.

Hit us up on Twitter @PFNFantasy with who you think got the best group this week. Also, continue to visit the Pro Football Network for NFL news and in-depth analysis like the #PFNOSM data while also visiting our Fantasy Football section for more coverage. 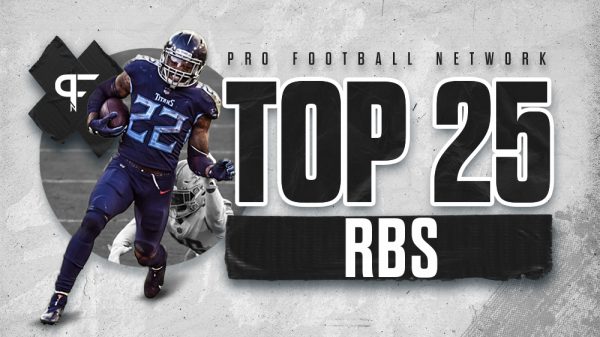 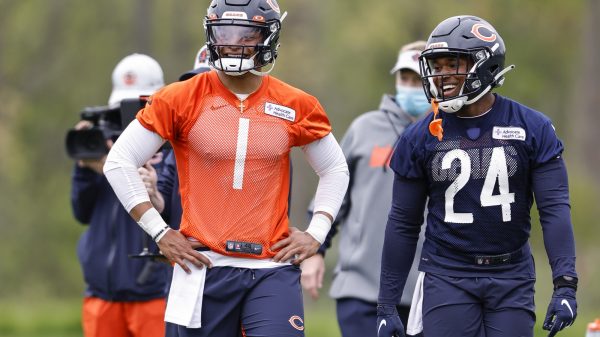 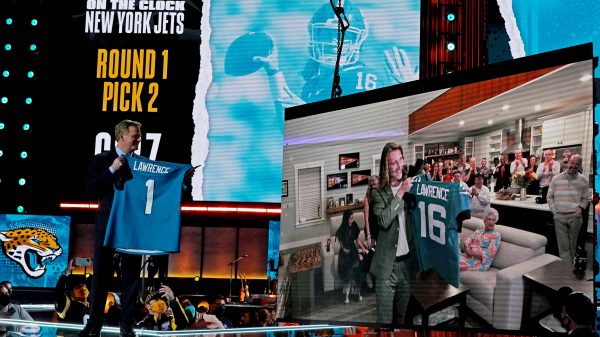