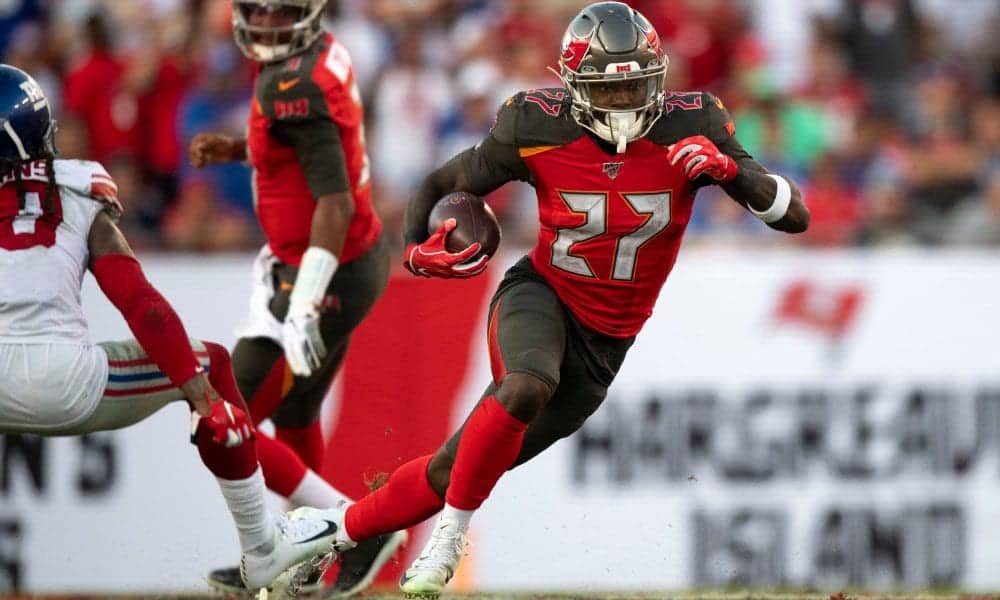 Welcome to our next entry in the new weekly series, where we have some of our fantasy analysts take turns picking who you should target on the waiver wire for Week 10. This mock draft format allows for some commentary and explanation, but it’s just a fun way for us to deliver this generally boring content in a new and exciting way. Let us know what you think! But for now, on with the fantasy football waiver wire Week 10 mock draft!

Similar to last week, here are the constraints for this column. This is for a 12-team, 1QB, half-PPR, two-flex league, and players named must be owned in fewer than 40% of leagues on ESPN. We opened it up a little to make it more fun, and as you’ll soon see, more fun is what we got!

“It’s frustrating trying to figure out the Tampa Bay Buccaneers’ backfield, but Ronald Jones has seen double-digit carries in the last two weeks and had one of his better games of the season this past Sunday against Seattle, finishing with 18 carries for 67 yards and a touchdown. Jones may not be the ideal choice, but he gets a favorable matchup in Week 10 against the Arizona Cardinals. With six teams on a bye this week, Jones is in a great spot to fill in at running back.” – Eric Frosbutter, PFN Fantasy Analyst

“It might not be pretty. It might make your stomach crawl. But, the Miami Dolphins’ offense hasn’t been all that horrible as of late, and DeVante Parker has actually been pretty good. He’s scored at least 11 PPR points in the last five games, and in four of them, he has scored a touchdown. He sees a high number of air yards, and his running mate, Preston Williams, has been deemed out for the rest of the year. Ryan Fitzpatrick loves to target big-bodied receivers, and Parker is likely to see plenty of work as the number one WR for Miami next week in Indianapolis.” – Corey Ashburn, PFN Fantasy Analyst

“Heading into last week, I said in my own waiver wire piece, “his path to fantasy success would involve being peppered with more targets on the way to stat lines that see him as a high floor/low ceiling option.” It looks like that’s exactly what happened with 7 targets for 6 receptions, 54 yards, and a score. Renfrow is another week of consistent involvement from being flex consideration material, but this could very well be the start of a trend.” – Andrew Jordan, PFN Fantasy Analyst

“Since the move to Ryan Tannehill at quarterback, A.J. Brown has become the WR1 for the Tennessee Titans’ newfound passing game. Playing in 60%+ of their offensive snaps in four out of the last five games gives us the opportunity we look for when finding value on players. Brown has weekly WR3 value, and in Week 10, where there are six teams on a bye, he could serve as a much-needed fill in.” – Tommy Garrett, PFN Fantasy Analyst

–All solid choices here, but RoJo is the clearcut target in all leagues where he’s available. This week was his coming out party, also making Peyton Barber next to worthless, even in dynasty leagues. Jones should see plenty of action down the stretch and could be a great add for your fantasy playoffs as injuries pile up and other workloads get muddied up. Easily worth the number one waiver claim and probably all of your remaining FAAB, if you have any left.

“Many fantasy owners are still doubting how valuable Alexander Mattison could be come playoff time. Following his worst game of the season statistically, Mattison’s ownership is even lower than it was last week when I urged owners to grab him while they could. It’s important to point out that Mattison is simply a stash player at the moment in case something were to happen to Dalvin Cook. Only pick him up if you have the room on your bench, but Mattison is a potential league winner if you have the space.” – Eric Frosbutter

“With T.Y. Hilton set to miss a few weeks due to injury, it appears that Zach Pascal has been a solid option for the Indianapolis Colts’ QBs. Both Jacoby Brissett and Brian Hoyer seem to be comfortable with the WR and he has 92+% of the snaps in back-to-back weeks. By the way, they play MIAMI next week!” – Corey Ashburn

“QB switch be damned; I’m all in on Auden Tate. In his last six games, he’s produced no less than 9 PPR points. That type of steady involvement in his real-world offense makes him a lock for fantasy players. With a knack for understanding how to shield away DBs and make use of his impressive frame, new signal-caller Ryan Finley should be looking Tate’s way early and often. I fully believe if he were on a better team with this type of production streak, he wouldn’t be available.” – Andrew Jordan

“Although his ownership has jumped up 13%, it’s still not enough. Yes, Zach Ertz looked like himself going over 100 yards for the first time this season and scoring a touchdown, but that didn’t relegate Dallas Goedert to the bench. He played in a season-high 79% of offensive snaps (Ertz at 77%) and ran 30 routes on Carson Wentz’s 45 dropbacks while also lining up in the slot 19 times. Opportunity leads to fantasy success. Goedert has all the ability and availability in an offense that can fully support two tight ends.” – Tommy Garrett

–For me, Pascal could easily become a league winner from the waiver wire, even with the knee injury to Jacoby Brissett, which doesn’t look serious. Pascal should see plenty of playing time and could prove helpful as we move through the remainder of the season. The same logic applies to the other three, Mattison, Tate, and Goedert, who have all been mentioned on waiver wire articles for weeks now. If you’re just now hearing about them, where the heck have you been all year?

“It’s ugly when discussing the tight end position, but you could do worse at this point than Darren Fells. Given his ownership, many fantasy owners are doing worse than him. Fells is currently the TE8 in PPR leagues, yet finds himself on this list at less than 40% ownership. It’s not pretty, but Fells does have six touchdowns on the season. It’s not normally wise to chase touchdowns in fantasy, but options are limited at tight end. Fells is on a bye this week too, so it’s possible that a previous owner may have dropped him.” – Eric Frosbutter

“New head coach Bo Callahan has provided fantasy football players good news in terms of Derrius Guice in two ways since he took over as head coach. He has committed to the running game and has said that Guice is likely back in Week 11. Though you’ll have to hold him on your bench this week, he could be a league winner if he hits his stride after the injury. Guice is extremely talented.” – Corey Ashburn

“Fresh off a bye week with more time to work with Matt Ryan, it’s Russell Gage who could be the steal of this draft. Mohamed Sanu was one of the most underrated assets in fantasy football prior to his trade to the New England Patriots, and now it’s on Gage to step in and fill those shoes full time. The Atlanta Falcons’ defense is in tatters, meaning the offense will have to air it out early and often down the stretch. If things work out properly, Gage could find himself as a weekly flex play.” – Andrew Jordan

“This is a bit of a reach play, but it appears Bilal Powell has surpassed Ty Montgomery on the New York Jets RB depth chart. The news Monday of Le’Veon Bell undergoing an MRI on his knee is concerning and would explain his lack of usage in what was a fantastic matchup against the Miami Dolphins. If Bell were to miss time and given the Jets’ upcoming schedule (NYG, WAS, OAK, CIN, MIA), Powell deserves a look in deeper leagues.” – Tommy Garrett

–All four of these picks are early waiver wire looks that could help your team weather the storm while guys like Adam Thielen and James Conner work to get healthy. All of these players are dart throws, but depending on your needs could be a huge help to your squad. You might not even have to spend anything on these guys either, making their value that much higher.

Hit us up on Twitter @PFNFantasy with who you think got the best group this week. Also, continue to visit the Pro Football Network for NFL news and in-depth analysis like the #PFNOSM data while also visiting our Fantasy Football section for more coverage.