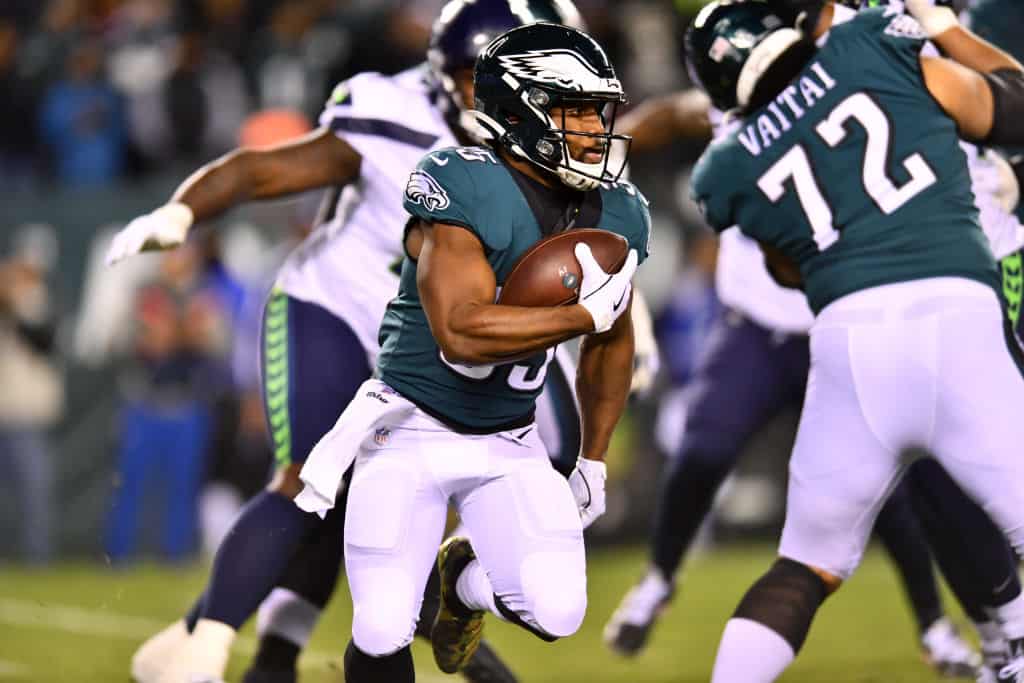 PHILADELPHIA, PA - JANUARY 05: Philadelphia Eagles Running Back Boston Scott (35) carries the ball in the first half during the NFL Playoff Game between the Seattle Seahawks and Philadelphia Eagles on January 05, 2020 at Lincoln Financial Field in Philadelphia, PA. (Photo by Kyle Ross/Icon Sportswire via Getty Images)
What's in this article? Click to show
Miles Sanders set to miss Thursday’s game, leaving Boston Scott to be the focal point
The problem with Boston Scott’s fantasy value might be no fault of his own, but the patchwork offense
Should you start Boston Scott on Thursday Night Football in fantasy?
Want more fantasy football analysis and news?

Another week and another group of notable Philadelphia Eagles are hitting the sidelines with injuries. This time, one of those is star running back Miles Sanders. With Sanders set to miss at least Thursday night’s game, it’s going to be up to Boston Scott to carry the load for his team and the fantasy football managers that are putting faith into him. Is that a smart choice to make? Can a former practice squad player behind a patchwork offensive line be a productive fantasy option, especially when some seasons are likely on the line?

Sources told ESPN’s Chris Mortensen on Monday that the Eagles are expected to be without running back Miles Sanders for Thursday’s game against the New York Giants because of a knee injury.

Sanders, along with tight end Zach Ertz, was injured during Sunday’s 30-28 loss to the Baltimore Ravens. Sanders was hurt on his 74-yard run in the third quarter when he was tackled from behind by DeShon Elliott. He left the game and did not return.

Sanders’ injury is a dark cloud hanging over what was a solid day, where he rushed nine times for 118 yards. Yes, his total and 13.1 avg is inflated due to the long score, but when without that, he was still averaging 5.5 yards per carry, well above the season average. And currently, Sanders leads the Eagles with 434 rushing yards on 71 carries with three rushing touchdowns.

Related | Will Keenan Allen be available for fantasy football teams in Week 7?

Thursday night’s game against the Giants won’t be the first time this season that Sanders has missed a game and left Boston Scott to be the lead back. Sanders missed the season opener, forcing Scott to be the Eagles top RB. He tallied just 11 opportunities for 54 yards that game, though he did have to leave temporarily with an injury of his own.

Scott has totaled just 115 yards on 28 touches this year, good enough for 4.10 yards per touch. While far behind Sanders at 6.32, Scott is still well ahead of Corey Clement’s 2.46 per touch average.

The problem with Boston Scott’s fantasy value might be no fault of his own, but the patchwork offense

There really is no sugar coating this, but the Eagles have been atrocious on offense. Carson Wentz is turning the ball over almost twice per game and has already taken 25 sacks. Sanders hasn’t been effective aside from a few huge rushing plays. And Philadelphia’s receivers are dropping tons of passes. Throw in injuries to Jason Peters, Lane Johnson, and Isaac Seumalo; their struggles should come as no surprise.

Of the initial 22 players on the offensive opening day depth chart, only eight are still healthy. Seven of those injuries are to the offensive line to the starter and his backup. It’s no wonder that the Eagles rank 27th in run blocking, averaging only 3.93 adjusted line yards (ALY) per play.

Scott will struggle to generate yards on the ground without better run-blocking. The Eagles are attempting the sixth-fewest runs per game (23.5), too, so there’s not a lot of carries to go around here. The part of Scott’s game that can salvage his fantasy value is that he is a more than competent pass catcher. While he has only seen 36 targets over the past two seasons in limited work, he has caught 31 of them for 252 yards.

The Eagles, and fantasy managers as well, are hoping to see Scott bring the same value this week as he did to close out their season.

Scott closed out the 2019 season with 82 Fantasy points in the final four weeks, where he saw six-plus targets in four straight games, including one Week 14 start and then another game in Week 17—all while filling in for an injured Sanders.

Should you start Boston Scott on Thursday Night Football in fantasy?

Going against a Giants defense that allows the ninth most fantasy points to running backs (26.00) and gives up on average six receptions and 50.5 receiving yards per game, I think Boston Scott will be an RB2 in fantasy for Week 7.

This is a must-win game for the Eagles, who, despite a 1-4-1 record, are in second place in the NFC East. They can’t afford to lose this game, and if they can get out ahead early, they will try to limit the turnover opportunities that have plagued their team this year and keep it either on the ground or use a short passing scheme.

The Giants have allowed a staggering 78.3 PPR points through the air to running backs alone this year. That’s 13.1 points per game through the air, and there’s not a whole lot of concern on the roster to take away Scott’s targets.

There is a chance that the team gets back both DeSean Jackson and Dallas Goedert this week, but outside of them, there is no one else on this offense.

It all comes down to your team’s needs. If you have a solid starting roster, then don’t get too cute and try to force Scott into your lineup, thinking that he will have a monster day. Now, if you have players on a bye week or are struggling with injuries, I believe that Scott is worth consideration as he should see at least 15 touches in this came and be a lower-end RB2 in Week 7.