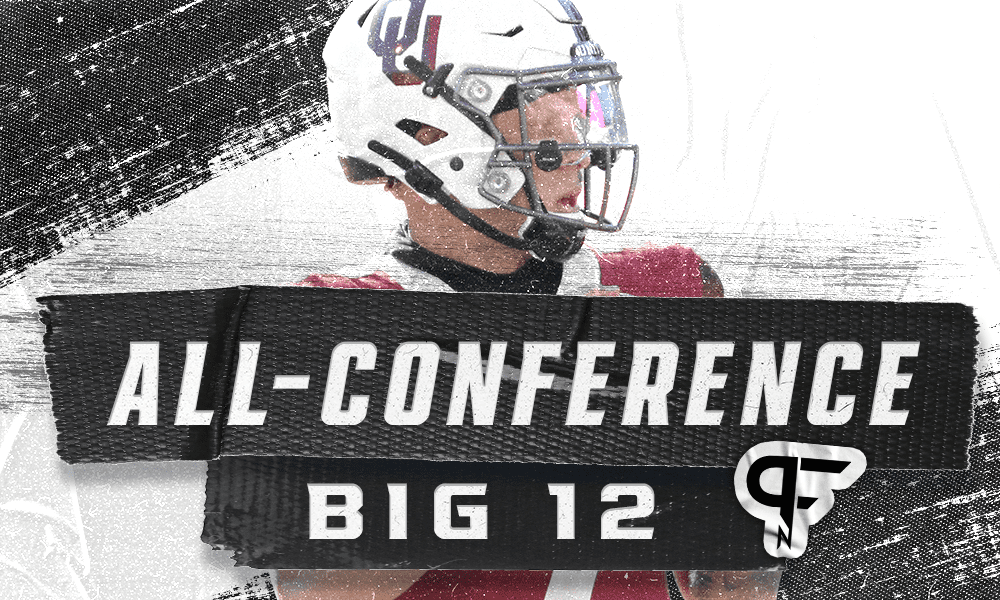 Are there any surprises in our Big 12 All-Conference first-team defense?

An exceptional athlete with elite burst and bend, Nik Bonitto has been a dangerous pass rusher for the Sooners since his 2019 redshirt freshman season. He has an array of pass-rush moves at his disposal and isn’t afraid to use them. The Oklahoma outside linebacker has amassed 18 tackles for loss across the last two seasons. Furthermore, his 9 sacks in 2020 took his career total to 12.5.

In addition to his pass-rush potency, Bonitto has also proven impactful in coverage with 6 career pass deflections and an interception. With Ronnie Perkins’ departure to the NFL, Bonitto will have an enhanced role within the Sooners’ defense this fall. A second-team AP All-American honoree in 2020, the Oklahoma pass rusher should once again be among the awards at the end of this season.

Lining up opposite Bonitto in our Big 12 All-Conference first-team is one of the nation’s top returning pass-rush producers. Last season, Mathis led the Big 12 with 0.90 sacks per game, ranking 12th in the country. In addition to his 8 sacks, the TCU defensive end tallied 12.5 tackles for loss. Heading into the 2021 college football season, Mathis has averaged a tackle for loss in every single one of his 22 starts.

Aside from the statistics, there’s plenty to love about Mathis’ game. The TCU pass rusher has excellent speed, displays impressive football IQ, and provides an element of valuable versatility. His ability to work inside and around the outside track makes him a dangerous force on the defensive line. With the emergence of teammate Khari Coleman, the Horned Frogs’ pass-rush duo may prove unstoppable in 2021.

Unlike his brother, Stills opted to return to West Virginia for the 2021 college football season. In doing so, he put himself in a position to be one of the best defensive tackles in the conference and elevate his NFL Draft stock. While the jury is still out on the latter, his selection in our Big 12 All-Conference first-team is evidence of his standing within the conference. Stills also earned PFN second-team All-American honors earlier this month.

An exceptional run defender at the heart of the line, Stills helped the Mountaineers to allow the third-fewest rushing yards per carry in the Big 12 last season. Additionally, they tied with Iowa State for the second-fewest rushing touchdowns allowed. Although his strength is in the run game, Stills has enough athleticism to cause an issue as a pass rusher. As a result, he has logged 13 sacks heading into the 2021 season.

Perrion Winfrey is an elite example of why production shouldn’t be the overriding element of player evaluation. Following two highly productive seasons at the junior college level, his 5.5 tackles for loss and half a sack during his debut season for the Sooners weren’t quite at the same level. However, dig beneath the numbers, and you find a highly disruptive defensive tackle who could do significant damage this fall.

Athletic, imposingly strong, and with untapped potential from a pass-rush perspective, Winfrey is a player to get excited about heading into the college football season. With a bit of added polish to his game, there’s every opportunity that he becomes one of the best defensive tackles in the 2022 NFL Draft class. Regardless, he’s already endeared himself to Sooners’ supporters with a pivotal play in last year’s Red River Rivalry.

Texas linebacker DeMarvion Overshown adds a first-team PFN Big 12 All-Conference accolade to his All-American recognition. After just one season at the position, the former safety is already garnering a reputation as one of the best linebackers in college football. A heavy hitter with the ability to move exceptionally fluidly around the field, Overshown’s transition to linebacker allowed him to rack him gaudy statistics last fall.

The Longhorns linebacker racked up 60 tackles, 8 tackles for loss, 1 sack, and 2 forced fumbles. Furthermore, his safety experience will help him be considered one of the nation’s top coverage linebackers. Last season alone, he registered 7 pass deflections and 2 interceptions. Overshown will be a must-watch player in the 2021 college football season with the ability to impact the game in multiple ways.

It would be tantamount to negligence to have an All-Conference team that didn’t contain the reigning Big 12 Defensive Player of the Year. Rose led the conference with 96 tackles in his junior campaign while adding 10.5 sacks last fall. Over his three-year career, the Cyclones linebacker has amassed an incredible 251 tackles, 29 tackles for loss, and 5.5 sacks. Meanwhile, he has snagged 6 interceptions.

At 6’4″ and 245 pounds, Rose does his best work coming downhill and laying the wood against the ground game. With their influential linebacker marshaling the defense, it’s no surprise that Iowa State led the conference in rushing defense last season. Rose also adds exceptional experience to the Cyclones’ defense as a 38-game starter ahead of the 2021 college football season.

Alongside Texas’ Overshown in our Big 12 All-Conference first-team is another safety-turned-linebacker in Oklahoma State’s Malcolm Rodriguez. Like Overshown, a crippling lack of depth in his team’s LB room necessitated a position change. And similarly, he has excelled in his new role. However — unlike the 6’4″, 220-pound Texas linebacker — Rodriguez has had to overcome size-based stereotypes to find success.

Substantially shorter than your average linebacker at 5’11”, Rodriguez also tipped the scales around 200 pounds at the time of transition. Despite his lack of relative size, it didn’t stop him from amassing 279 tackles, 16 tackles for loss, 4.5 career sacks, and 4 forced fumbles. The Oklahoma State linebacker proudly professed to be up to 235 pounds ahead of the 2021 college football season. As a result, he projects to be a dangerous threat to anyone who gets in his way this fall.

The conference’s leading pass breakup artist in 2020 unsurprisingly earns Big 12 All-Conference recognition ahead of the upcoming season. Hodges-Tomlinson’s 13 pass deflections not only led the Big 12 but ranked fourth in the entire nation. He also had four games where he logged 3 pass breakups, displaying an incredible level of consistency in the Horned Frogs’ secondary.

Although THT’s diminutive stature at 5’9″ will undoubtedly cause concern among the NFL Draft scouts, it doesn’t inhibit his ability to make plays at the college level. In addition to his evident playmaking ability in coverage, the TCU cornerback plays with physicality at the line of scrimmage and in the open field. Turning some of those pass deflections into interceptions could help to improve his profile substantially.

DaMarcus Fields finished behind Hodges-Tomlinson last season in pass deflections. However, his 11 deflections came in just eight games. As a result, he led the Big 12 in deflections per game while finishing fourth in the nation by the same metric. Although Fields didn’t record any interceptions in 2020, his 4 career interceptions included a 95-yard pick-six as a freshman in 2017.

With Zech McPhearson departed to the NFL, Fields should emerge as a leader in the Red Raiders’ secondary. In addition to his obvious ability to be disruptive in the passing game, the cornerback is a physical presence against the run. Fields has tallied over 150 career tackles, with 9.5 tackles for loss and 2 sacks. Once a laughing stock of the conference, the Red Raiders’ defense could once again produce an NFL Draft talent.

With exceptional special teams play for the Longhorns last season, Jamison was a contender for the defensive flex position in our Big 12 All-Conference squad. After a sensational season of kick returns, the senior defensive back was named the conference’s Special Teams Player of the Year. In addition to setting a program record 31 yards per kickoff return, Jamison took a 100-yard return to the house to spark the comeback, which led to a win over Oklahoma State.

However, slotting Jamison in at the flex spot does a disservice to his ability at CB. He is the best cornerback on the Longhorns’ roster, leading all Texas defensive backs in pass deflections last season. Jamison’s sticky in coverage while also possessing impressive speed, making him a dynamic playmaking threat. Although it wasn’t from last season, and as such shouldn’t bear on how we view him coming into the season, Jamison has one of the highlight interceptions of recent seasons with a one-handed grab against West Virginia in 2019.

After spurning the opportunity to head to the 2021 NFL Draft, one of the most important members of the Oklahoma State defense returns to the Cowboys this fall. The 5’11”, 205-pound Tre Sterling is a heat-seeking missile. He is explosive out of the defensive backfield, looking to blow up anyone that stands in the way between him and the ball.

As a result, Sterling ranked in the top 10 of the conference for tackles for loss last fall. That production took his career total to 19 tackles for loss with 146 total tackles. Although he’s not the tallest safety in college football, Sterling has shown he can be disruptive in coverage in addition to his physicality against the run. He snagged 2 interceptions last season, including a 65-yard score against Texas Tech.

Another Cowboys’ defensive back who could have headed to the NFL last fall, Harvey-Peel joins his Oklahoma State teammate at the heart of our Big 12 All-Conference secondary. In some ways, his return is an even more significant boost for Cowboys fans. Harvey-Peel had already declared for the NFL Draft before performing a U-turn and opting to remain in Stillwater.

Although his performances last fall fell short of his team MVP 2019 campaign, there’s no denying that Harvell-Peel is a dangerous playmaker. He snagged 2 interceptions last fall with an additional 4 pass breakups. Meanwhile, he has 115 career tackles with 5 tackles for loss and 2 sacks through his three career seasons.

One quick look at the laundry list of honors Pitre acquired last season demonstrates why he’s the perfect pick to be the defensive flex player on our Big 12 All-Conference first-team. He earned first-team All-Big 12 honors from the Associated Press at safety last fall. Pitre also made first-team All-Texas at linebacker by Dave Campbell’s Texas Football. Furthermore, he was an honorable mention for the Big 12 Defensive Player of the Year.

Pitre was the epitome of a do-it-all player for the Bears last season. From coverage safety to pass rushing off the edge, Pitre compiled a gaudy stat line during 2020. He racked up 60 tackles, 11 tackles for loss, 2 sacks, and 1 forced fumble. Furthermore, Pitre became the first-ever Baylor player to record 2 interceptions in the same season. There’s no reason to presume that he can’t achieve the same production level in the second year of Dave Aranda’s tenure in Waco.