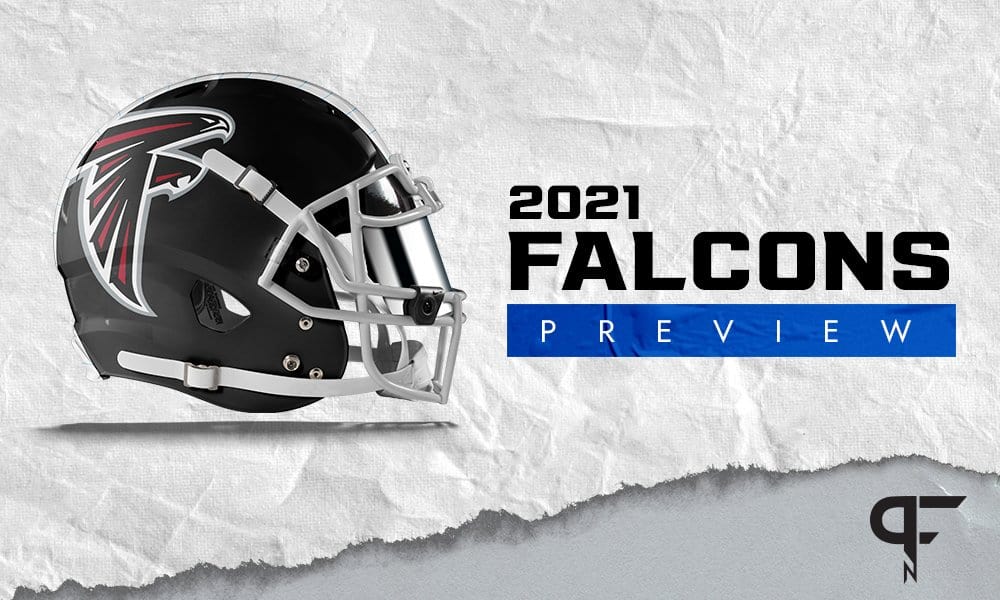 The Atlanta Falcons 2021 season preview is largely focused on the pieces they put in place for their future. Can they develop young talent?

The Atlanta Falcons are rebuilding, so their 2021 season preview isn’t looking for ways to make the playoffs this year, but how they can improve going forward. The NFC South possesses two of the best teams in the NFL — the division title is not in sight for the Falcons. Still, they will look to solidify their defense throughout the season and implement a new offense with Arthur Smith.

The Falcons’ schedule ends up a bit easier than the average. They only have three games against teams projected to win 10 games, but two of those are against the reigning Super Bowl champion Buccaneers. The other is against the Buffalo Bills away from Mercedes-Benz Stadium. However, they also play two games against a solid Saints roster that is only projected under 10 wins because of the quarterback position.

Furthermore, Atlanta gets to play the Jets, Jaguars, Giants, and Lions. The division also houses the Panthers, meaning the Falcons play six games against teams projected to win less than eight games next season.

The Falcons hid in the shadows and moved silently during the 2021 offseason. They didn’t lose much in free agency, and they certainly didn’t spend much either. That was probably because they couldn’t spend any money.

Atlanta’s strapped salary cap forced their hand with generational talent Julio Jones, who they traded to free up enough money to pay their rookie class. Jones travels to Tennessee, where he will team up with A.J. Brown and Ryan Tannehill.

Other losses the Falcons sustained include Alex Mack, Keanu Neal, and Damontae Kazee. All three were solid contributors to the Falcons, but with their own flaws. Mack was over the hill at 35 years old. Neal is making the transition to linebacker. Atlanta’s pass defense was horrific in 2020, and he was not a help in that regard. Kazee was never an overwhelming athlete to begin with, and now he’s coming off an Achilles tear.

The Falcons did sign running back and quad model Mike Davis on a two-year deal. Yet, the biggest addition might be cornerback Fabian Moreau, who brings a veteran presence to a young secondary.

The 2021 NFL Draft was the true beginning of the Falcons’ rebuild. The first draft for general manager Terry Fontenot certainly seemed both exciting and outstanding. There’s a philosophical argument to be made about not drafting the local quarterback, Justin Fields. Matt Ryan’s contract doesn’t allow the Falcons to move on after 2022 inexpensively. Overall, the draft was a massive success.

Therefore, they foreshadowed their transition away from Julio Jones with the selection of create-a-player tight end Kyle Pitts. He begins his career at just 20 years old, but he’s already a grown man. The fit for him in Arthur Smith’s scheme is curious, though. Jonnu Smith spent a lot of time in pass protection in Smith’s offense in Tennessee.

However, the Falcons also roster Hayden Hurst, so we might see them flex Pitts out wide as a traditional X or in the slot. That would make for a lineup of Pitts, Hurst, Calvin Ridley, and Russell Gage. That’s a dangerous group of weapons.

They attempted to address their coverage issues with the addition of UCF safety Richie Grant. Grant projects as the best true free safety from the 2021 class. Jalen Mayfield is a big-upside addition to the interior offensive line. He might not be ready on Day 1, but he has a lot of potential at guard.

Fontenot and the Falcons had a blast on Day 3 as well. Darren Hall played a bit of safety early in his San Diego State career before moving to cornerback. Atlanta needs help at cornerback despite selecting multiple players at the position somewhat early in each of the previous three drafts. They also spent a fifth-round pick on Boise State cornerback Avery Williams. Williams is one of the most decorated special teamers in the history of college football. He should make an immediate impact as a returner.

Drew Dalman was a great selection for the previous regime that used zone-blocking schemes, but that isn’t head coach Arthur Smith’s go-to. Dalman is an undersized, athletic blocker who will be a positional player at the NFL level. It’ll be interesting to see if he can add enough strength to compete for a starting spot as a rookie in 2021.

Texas defensive tackle Ta’Quon Graham is another undersized, athletic player for his position. He needs technical refinement, but he has a lot of pass-rushing potential with his frame and athletic ability. Adetokunbo Ogundeji has one of the longest wingspans you’ll find on a pass rusher. He fits this draft because he has raw athletic ability but needs technical sharpening.

Frank Darby rounds out the group. The Arizona State wide receiver is a lot like the previous two that came from the school. He’s right around 6’0″, 200 pounds, and has long arms to elevate and snatch passes.

Where do Atlanta players rank in PFN’s Top 100?

Which of Atlanta’s players found themselves in Pro Football Network’s Top 100 heading into 2021?

Ryan is still one of the better quarterbacks in the NFL. He’s only had one season under a 60 QBR in his career. Although he’s had one of the best receivers we’ve ever seen on his team, Ryan has never been one to necessarily force targets. He is one of the last of the pocket-QB breed.

Ridley is the primary target for the Falcons heading into 2021. Even if the team didn’t trade Jones, Ridley might have overtaken him. He’s one of the best route runners in the league. He started taking over Jones’ role while the veteran WR fought through injury. Ridley’s yards per catch jumped to 15.3, and even though his catch percentage dropped, his yards per target number increased. He’s become a more explosive weapon.

Jarrett didn’t have the sack production in 2020, but his overall contribution was outstanding. He’s become a much better run defender over the past few seasons. He got to the quarterback more often on a bad defense than he had in the past.

The season preview for the Falcons in 2021 is important to base not on the season’s results but on the team’s ability to progress young players. Smith is making his head coaching debut, and his offenses in Tennessee were outstanding the minute he got competent quarterback play. Atlanta’s offense doesn’t have the running game of the Titans, but they do have a great passing attack in place.

Offensive coordinator Dave Ragone makes his debut as well. He was the passing game coordinator for the Bears in 2020 and spent the previous four years as their quarterback coach. Smith also convinced defensive coordinator Dean Pees to come out of retirement. Pees has won Super Bowls with the Ravens and Patriots, but he has a lot of work ahead of him with this roster.

The Falcons were middle of the pack from an efficiency standpoint in 2020. If the Falcons can remain closer in games, they should find more efficient results in 2021. In Smith’s two seasons as OC for the Titans, they finished in the top five both times.

Atlanta lacks potential in their pass rush, and they have a young secondary that struggled mightily last season. Hopefully, the addition of Pees calling the defense helps get them back to mediocrity and not a bottom feeder.

With the Falcons’ strength of schedule, there’s a chance this team walks away with 7 or 8 wins. The success or failure of Atlanta’s 2021 season should focus on the development of their young talent. Seeing Pitts produce as a rookie would be outstanding. Their quarterback is a solid veteran who will help them as well. However, the Falcons must figure out a way to secure their QB of the future soon.