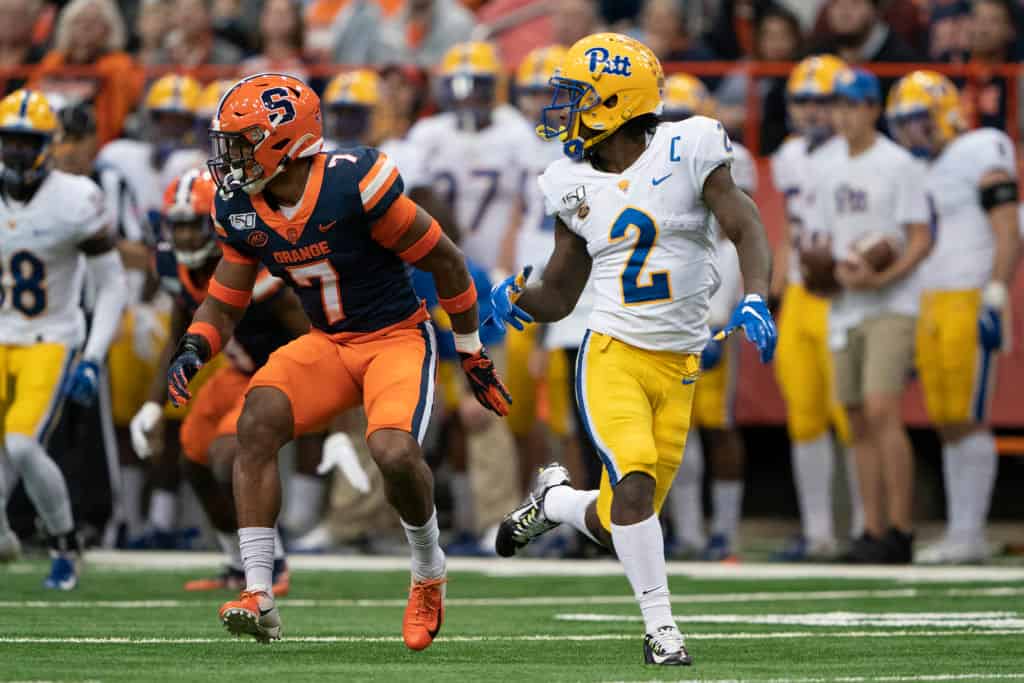 The NFL is a fierce, complex tug-of-war. Who can take the momentum and maintain it through four quarters? Playmakers are often called upon to steal momentum from opponents. With the recent rise in offensive firepower, defensive playmakers are becoming more and more valuable. Syracuse safety Andre Cisco has the production and the traits of that archetype, but how does he project in the NFL Draft?

Positives: Explosive three-down safety who was having a terrific season before being shelved with knee injury. Effectively reads and diagnoses the action, takes proper angles to plays, and fires around the field working hard. Aggressive, efficient, and plays bigger than his size. Displays good awareness in coverage, shows solid ball skills, and possesses an explosive burst to the ball out of his plant.

Watches the quarterback’s eyes when facing the action and correctly times his pass defenses. Immediately picks up assignments and works well with cornerbacks. Possesses good hands for the interception. Physical against the run, fires up the field, and sells out to make tackles.

Negatives: Has size limitations. Not a stout or secure tackler.

Analysis: Cisco was highly rated off his tremendous sophomore campaign of 2019, and he showed improvement in his game last year before being sidelined with a knee injury. He’s small but explosive and offers potential in a variety of schemes if he gets back to prior playing form.

The Syracuse Orange quietly built up a tremendous secondary unit in the lead-up to the 2020 season, and Andre Cisco was the most prestigious member. In a defensive back group that included Ifeatu Melifonwu, Trill Williams, and upstart freshman cornerback Garrett Williams, Cisco came into 2020 with the most buzz. That wasn’t by accident.

Of course, it didn’t start that way for Cisco. He had to work his way toward recognition. In high school, after playing at IMG Academy in Bradenton, Florida, Cisco was only a three-star recruit.

Even after putting up a vertical jump over 35 inches, Cisco still only had offers from mid-level Power Five schools. Programs like Nebraska, Northwestern, Illinois, and Vanderbilt, showed interest in the safety. However, Cisco ultimately chose Syracuse and resumed his football career in New York.

It’s not an exaggeration that Andre Cisco might have had one of the most productive true freshman seasons in college football history.

Cisco came to Syracuse in 2018 and immediately took on an extended role on the defensive side of the ball. Although he came to Syracuse as a mere three-star prospect, Cisco exploded onto the national stage, amassing 60 tackles, 7 interceptions, 9 pass deflections, and a forced fumble in 13 games and 11 starts.

The Syracuse safety was a first-team All-ACC selection in his first year. He also received All-American recognition from various platforms.

In 2019, expectations were extremely high for Cisco, and he continued to provide value as a playmaker. Cisco only played in nine games as a true sophomore. Yet, he still managed to put up 65 tackles, 5 interceptions — including a pick-six — 5 pass deflections, a forced fumble, and a fumble recovery. He again earned All-ACC recognition and moved into 2020 with the NFL Draft in his sights.

Unfortunately for Cisco, his intentions of finishing strong would not come to pass. Cisco played well in Syracuse’s first two games against North Carolina and Pittsburgh, showing off burst and decisiveness. However, in warmups ahead of Syracuse’s third game against Georgia Tech, Cisco collided with a teammate and suffered a leg injury. That injury would turn out to be a torn ACL, sidelining Cisco for the rest of the year.

The injury made Cisco’s draft stock vulnerable. However, Cisco’s plans didn’t change. Having put enough on tape over his first two seasons, Cisco chose to declare for the 2021 NFL Draft.

Across his collegiate career, Cisco logged totals of 136 tackles, 2.0 tackles for loss, 13 interceptions, 14 pass deflections, 2 forced fumbles, and a fumble recovery. Had he played all of 2020, Cisco would have been a three-year starter as a true junior. That’s not something many Power Five players can boast.

Andre Cisco’s playmaking ability is top-notch. He has the ball skills and instincts necessary to rove around the deep third and hawk on passes that spend too much time in the air.

What truly underpins Cisco’s playmaking talent is his physical athleticism, but he has a nice combination of physical and mental traits to take into account. These traits afford him some versatility. Although he primarily plays at deep safety, Cisco also logged some snaps in the box and at linebacker in his time at Syracuse.

Cisco is an impressive athlete. I don’t think he’s quite an elite athlete overall, but he does have one elite trait in his explosiveness. The Syracuse safety can easily generate immense amounts of momentum out of his breaks, and his closing speed shows up at all ranges.

Cisco’s combination of athleticism and instincts

Deep down the field, his closing speed gives him the range and positioning to cut off deep threats. Cisco’s ferocious closing speed allows him to shoot in front of underneath routes and levy hard contact on ball carriers in the short and medium ranges. He also displays some agility and fluidity when navigating through a crowd. Cisco plays fast and physical. He has the traits to solidify that style.

Of course, closing speed is useless without the proper instincts. Cisco certainly has those as well. Closer to the line, he has impressive route recognition ability. He’s able to pinpoint tells in receivers’ route running and close in with tremendous quickness, putting himself in a position to make a play.

In the deep third, Cisco does a good job keeping himself neutral until he has to break, and he follows the quarterback’s eyes to detect intent. He’s aggressive but also relatively disciplined. This combo allows him to make plays without also giving up big plays for the offense.

What are the potential concerns with Andre Cisco?

While Cisco’s explosiveness is elite, the rest of his athletic profile falls a bit short of that mark. His long speed sometimes comes up just short in spots where range is required. Furthermore, he isn’t always the most fluid player when flipping his hips vertically. There is a slight stagger when Cisco moves to change directions and flow out of his backpedal.

In addition, while Cisco has nice flashes of discipline and aggression, he can still seek a better balance between the two traits at the NFL level. There are times when he can be late flipping out of his backpedal to shadow deep receivers. In these situations, Cisco more than once let a big play by. While his lacking hip fluidity played a factor, so too did the timing of his transition.

Furthermore, closer to the line, Cisco can sometimes pull the trigger at the wrong times. He’ll sometimes bite on underneath routes and let WRs slip by him. In the NFL, he’ll have to keep honing his instincts. He offers tremendous potential as a center-fielder, but that role comes with added responsibility and higher stakes.

Among other things, Cisco is a good but not great tackler. He’s fairly strong and sound, but he can do a better job wrapping up at times. In addition, the Syracuse safety suffered a torn ACL ahead of last year’s game against Georgia Tech.

There will certainly be questions surrounding his return. The injury occurred in late September, so there is a chance he could be available for the team that drafts him in Year 1. Beyond that, he’ll have to show he hasn’t lost a step.

There are lingering questions for Andre Cisco. He’s undoubtedly one of the best safeties in the 2021 NFL Draft if he can return to full strength. However, it remains to be seen how he’ll recover from his ACL injury. Some players are able to retain all of their athletic quickness, while others find some of that athleticism sapped away.

The good news for Cisco is that he’ll only be 21 years old in March. If he needs some time in the NFL to acclimate first, he has the time he needs. If the leg injury proves to be a non-factor long-term, then Cisco is unquestionably a playmaker worthy of a Day 2 selection.

His injury could potentially push him a bit further down the board. Still, in a safety class where several hybrid projections cloud the board, Cisco’s clarity as a playmaker in the secondary should be refreshing for scouts.

Against the pass, he’s a danger to the opposing quarterback at any level and a proactive playmaker in single-high coverage. While Cisco isn’t great at deconstructing blocks in the run game, he has the necessary closing speed and physicality to be a factor.

Which teams could most use Cisco’s talents in the secondary?

In the modern NFL, getting a playmaker who can go beyond simply fulfilling his role at safety is a valuable thing. Offenses continue to increase output, but a good way to reclaim momentum is to have players who have a proven track record when it comes to generating turnovers.

Andre Cisco’s instincts and athleticism allow him to carry this distinction at free safety. For teams like the Houston Texans, Dallas Cowboys, Minnesota Vikings, and Las Vegas Raiders, Cisco would be an additional benefit. However, depending on how teams value him, he could be a good selection for many other teams beyond that.

Andre Cisco’s ACL injury will be the largest concern surrounding the Syracuse safety as the NFL Draft approaches. That injury may prevent him from having an opportunity to test at his pro day. However, despite this, Cisco has more than enough production on tape to justify confidence. He’s a potential steal in the middle rounds if he can come back as the same athlete he was in college.