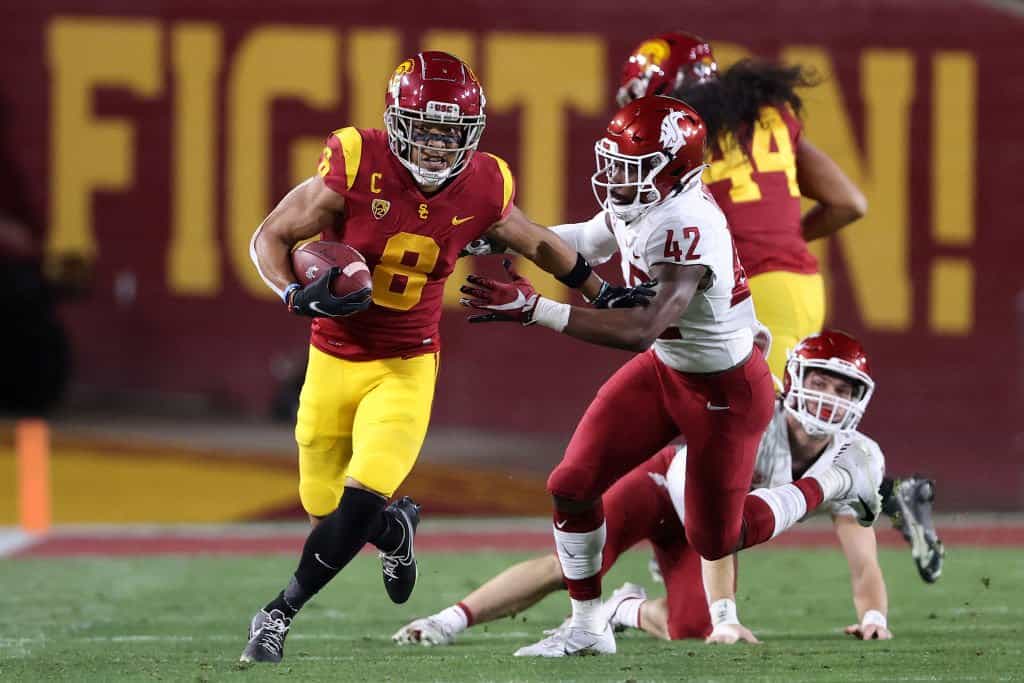 LOS ANGELES, CALIFORNIA - DECEMBER 06: Amon-Ra St. Brown #8 of the USC Trojans eludes the tackle of Halid Djibril #42 of the Washington State Cougars on a punt return during the first half of a game at Los Angeles Coliseum on December 06, 2020 in Los Angeles, California. (Photo by Sean M. Haffey/Getty Images)
What's in this article? Click to show
Amon-Ra St. Brown’s dynasty value for 2021
St. Brown succeeded even on a talented USC offense
Where should you draft St. Brown in dynasty rookie drafts?
Want more fantasy football analysis and news?

Coming from an uber-athletic bloodline, Amon-Ra St. Brown quickly saw his dynasty value soar while at USC. A physical, sure-handed, and advanced route runner, St. Brown has the whole package and should quickly find his footing amongst the better fantasy football options in 2021.

I have been saying for years that St. Brown is the most talented member of the family. I firmly believe that he could have switched places with his brother Equanimeous St. Brown even as a freshman, and the Green Bay Packers would have improved.

Pound for pound, St. Brown might be the most physical receiver in the class. At 5’11” and 197 pounds, he was more than willing to run over the middle and give and take hits from defenders. Several times, in fact, he was the one left standing. You would expect this from the son of a former two-time Mr. Universe. St. Brown plays the game with an intensity that few can match on the field.

St. Brown has the mix of a hard-nosed playstyle, along with one of the most polished route trees in the class. Even in a loaded wide receiver class, the former Trojan is firmly in the mix to be one of the most productive players early on.

While he might not have the potential ceiling to become an elite WR1 in fantasy, St. Brown’s dynasty value is likely that of a reliable WR2/WR3. You will be hard-pressed to find a more “pro-ready” player in the class than St. Brown. His father has been grooming him for this moment his entire life.

I was losing my mind watching him fall in the draft, but I could not be happier with this landing spot for St. Brown. The Lions need substantial help at the receiver. They have more unaccounted targets from 2020 than any other team in the NFL.

Over 59% of their targets (394) and a staggering 72.4% of their air yards (3,519) are up for grabs. On the Lions depth chart sits Breshad Perriman, Tyrell Williams, and Quintez Cephus.

Neither of these players has been reliable fantasy assets over the last few seasons outside of the final three games of 2019 when Perriman recorded 17 receptions for 349 yards and 4 touchdowns when both Mike Evans and Chris Godwin were injured. As for Williams, you have to go back to 2016 as a Charger for the last time he posted a 1,000-yard season.

St. Brown is going to lead the Lions in targets as a rookie. I am calling that now.

The only competition will come from T.J. Hockenson, as Jared Goff has shown a willingness to target his tight ends, whether it was Tyler Higbee in 2019 or Gerald Everett in 2020. Over the past two seasons, they combined for 271 targets, 191 receptions, 2,080 yards, and 11 touchdowns.

What we do not know yet is whether or not Goff’s success was due to his skill set or that of Sean McVay’s system. In 2018 and 2019, Goff threw for over 4,500 yards in back-to-back seasons for a combined 54 touchdowns but saw his production dip in 2020 when he totaled just 3,952 yards and 20 touchdowns.

Although Goff is a downgrade from Matthew Stafford, he has shown the ability to be a fantasy-friendly QB. Both Robert Woods and Cooper Kupp were consistent top-12 options nearly every week in PPR formats with Goff under center.

Another factor to consider is where the Lions as a franchise are currently. There is no question that despite a fantastic NFL Draft, they are a team that is undergoing a full rebuild. Where the Rams’ defense could keep Goff in games, he will not be afforded that luxury in Detriot. I expect this to force the Lions to rely on his arm and pass catchers like St. Brown to claw themselves back into games. While not ideal for wins, it is excellent for fantasy production.

St. Brown succeeded even on a talented USC offense

Watching St. Brown dominate defenses was enough of a reason to stay up for Pac-12 After Dark. His nuance as a route runner combined with solid body control and consistent hands will make him an immediate NFL producer.

He wasted no time his freshman season, posting 750 receiving yards and 3 touchdowns on a team-leading 60 receptions. He followed up a solid freshman campaign with his best statistical season. As a sophomore, St. Brown caught 77 receptions for 1,042 yards and 6 scores. With Michael Pittman still on the team, St. Brown was second in both yards and touchdowns.

In 2020, the USC receiver took it up a notch, finally becoming the WR1. He would also lead the Pac-12 in receptions (41 for 478 yards) and finish third in total touchdowns (7) in a pandemic-shortened season, culminating in a first-team All-Pac-12 selection.

During the USC Pro Day, St. Brown posted a 4.59 40-yard dash and threw up 20 reps on the bench. What stands out for dynasty is not the testing numbers but the film. Everything from his release to routes, body control, ball tracking, and contested-catch ability make him one of the most complete WRs of the class.

The only thing missing is the homerun speed, but that is not a dealbreaker for fantasy production. We have seen numerous other receivers thrive with sub-4.6 speed. Sure, the flashy 75-yard plays can win you a week on their own, but a professional pass catcher is arguably just as valuable. I will take the player with the higher floor every day of the week.

Where should you draft St. Brown in dynasty rookie drafts?

St. Brown is a rock-solid wide receiver prospect in this deep 2021 class. Where most drafts circle around the running backs, receivers steal the show this year. There are also bonus points for having the best name in the draft too. While some other receivers might have more explosive upside, St. Brown is more polished.

The USC alum lands with the Lions who have a massive need for receivers, and I believe he will find instant success. Regardless, St. Brown is a locked-in early Round 2 or even late Round 1 pick in upcoming rookie drafts. Once you move into a Superflex format, the five quarterbacks should slot in ahead of St. Brown, given the positional scarcity.

There is a legitimate case that by the end of the 2022 season, nine receivers from this class could be top-30 WRs in fantasy. That’s incredible. There is a noticeable tier separation, though.

Ja’Marr Chase and DeVonta Smith are the crown jewels and in a class of their own. In the second tier, we find Rashod Bateman, Jaylen Waddle, and Rondale Moore. One alpha-type and the two of the best after-the-catch receivers in the class.

Tier 3 is arguably the best value in the upcoming rookie draft, with Terrace Marshall Jr, Elijah Moore, and St. Brown.

I don’t believe you can go wrong with either of them. Now that we are in the post-draft phase of the season and can attach teams to these names, the differences in their landing spots could be enough to sway you one way or another. However, I would always advocate selecting the talent rather than landing spot alone.