The Tennessee Titans were last year's surprise team, making it all the way to the AFC Championship. After an impressive year from Derrick Henry, can he repeat as the NFL's rushing leader and potentially win the MVP award in 2020?

On this week’s episode of Pro Football Network’s Against the Spread podcast, hosts Ryan Gosling, Chris Smith, and George Templeton broke down the AFC South division. When the trio landed on the Tennesse Titans, last year’s runner ups in the AFC, an interesting question arose. Could Derrick Henry be a legitimate NFL MVP candidate in 2020?

After an impressive season, Henry currently sits at 55-1 at most sportsbooks to win MVP honors. That is a huge number for someone who had a career year in 2019, leading the NFL in rushing yards (1,540) and tying with the Green Bay Packers’ Aaron Jones for the most rushing touchdowns (16). He also averaged over 5.0 yards per carry for the first time in his career and even set a career-high in receiving yards (206).

With those very long odds, is there any value in putting some money on the dark horse candidate to win the award? What exactly will Henry have to do to take home the MVP trophy and is there another prop that is more reasonable?

History is not on Derrick Henry’s side

When you take a look at who has won the MVP award in the past, it becomes evident as to why Henry’s odds are so long. In the past thirteen seasons, there has only been one running back to win MVP. Back in 2012, Adrian Peterson brought home the hardware after an unbelievable season that saw him rush for 2,097 yards and 12 TDs with the Minnesota Vikings. Peterson had to basically break the all-time single-season rushing yardage record to take home the award.

Before Peterson, LaDainian Tomlinson was the only other running back to win the MVP in nearly the last two decades. Tomlinson was able to do so by breaking the single-season TD record, rushing for 28 with the San Diego Chargers.

Now, as prolific as Henry’s 2019 season was, it was far from that of either Peterson to Tomlinson. However, an argument that can be made in Henry’s favor is that he has done nothing but improve since coming into the league.

The problem still lies in the numbers. Even with the best season of his career, he was far from reaching either 2,097 rushing yards or 28 rushing TDs. If those remain the cornerstones of what it takes to win the award, Henry will need to have a near historic season with Tennessee to do so. Now, the question becomes whether or not he is in the best position to improve on 2019.

If you are looking to put money on a prop that has a running back winning the MVP award, the first aspect you need to analyze is their strength of schedule against opposing run defenses. It turns out, Henry’s schedule is quite favorable to the run.

The Titans project as favorites in 10 games this season, and they get most of their tough rushing defenses at home. They play the Jaguars twice, a team that ranked 28th in rush defense last year while allowing 139.3 yards per game. They also get to play the Browns who ranked 30th and the Bengals who ranked 32nd. 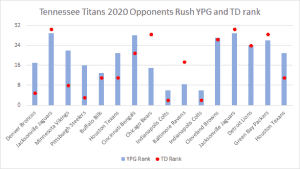 Overall, they only face three teams that ranked better than 13th in defensive efficiency against the run. Obviously, this is based on metrics from last season, but still, it bodes well for Henry’s MVP chances.

They also have the second easiest strength of schedule in general according to Warren Sharp. If you look at Week 4 through Week 10, the only road game they play is after their bye week when they visit the Bengals in Week 8, while four of their six opponents were not playoff teams last season.

The reality of the situation is that quarterbacks are often MVP winners because they are usually the reason a team wins or loses a game. This was not the case in the playoffs last year, as Henry literally put the team on his back rushing 34 times for 182 yards and a touchdown in Tennessee’s upset win over New England. The next week he followed that up with 30 carries for 195 yards in their win against the AFC’s best regular-season team in the Baltimore Ravens.

During those same three playoff games, Tannehill threw the ball a whopping 36 times for 369 yards and five TDs. Tannehill was the epitome of a game manager who did just enough to keep the team ahead. Unfortunately, the regular season was a different story.

During the regular season, with just 10 games as the full-time starter, Tannehill put up impressive numbers: 2,742 yards and 22 TDs. The emergence of rookie reciever A.J. Brown was enough for this offense to become one of the more talented passing units in the NFL.

Even if Henry has another big year, that will likely mean that Tannehill has also found quite a bit of success. Being able to establish a solid run game means that defenses often overlook the passing game. If that happens to be the case in 2020, Tannehill will be a frontrunner for MVP before Henry.

Could there be competition in the backfield?

Another aspect that you need to be mindful of before laying money on Henry for MVP is the selection of Darrynton Evans in the third round. The Appalachian State running back is coming off of an impressive two seasons with the team. PFN’s senior draft analyst Tony Pauline had this to say about the young back heading into the draft.

“Evans was a terrific back for Appalachian State the past two seasons and has the physical skills to be a situational ball carrier at the next level. He must round out his game and play in a system that does not ask him to run laterally, but Evans should be a good rotational back at the next level.”

Last year, Henry had little competition with Dion Lewis challenging for touches. That might not be the case with Evans. As a junior, Evans rushed for 1,480 yards and 18 TDs. He added another five touchdowns in the passing game.

If you look at his Relative Athletic Score, a metric and analytics system created by Kent Platte that takes player measurements and puts them on an easy to understand 0 to 10 scale compared to their position group, he ranked impressively. He finished his combine performance with an “elite” score of 9.12.

As you can see, he scored in the elite range in both the vertical and broad jump, as well as the 40-yard dash and 20-yard split. He has great speed but his size can be viewed as poor. Combining his skill set with that of Henry’s might mean that Henry is on the sideline more often than he was in 2019.

Can the Titans’ running back win the NFL MVP?

At the end of the day, there are aspects that play in Henry’s favor. Unfortunately, they are too few and far between for me to feel confident in laying any sort of money on him winning the MVP award.

Even with an easy schedule, the addition of Evans and the high standard required for a RB to win the award, makes me want to look elsewhere. Luckily, there is one other prop that I think has some value.

Henry to lead the league in rushing yards currently sits at +750. With the schedule breakdown I mentioned earlier, this is something that I definitely think can happen. Realistically, there is only a handful of RBs left in the league that lead their backfield. The rest are doomed to running back by committees. Henry could easily repeat as the leader of the rushing yard clubhouse.