OSM Back to the Future: Adam Humphries’ top-ranked performance from 2018

Adam Humphries' top-ranked performance by OSM from the 2018 season proves the former Buccaneers receiver can have a consistent impact for the Titans.

Adam Humphries’ first year with the Tennessee Titans was underwhelming. However, as his top-ranked performance by Pro Football Network’s Offensive Share Metric (OSM) from 2018 proved, there are enough recent examples of him excelling to suggest he can make a more significant impact in 2020.

Having signed a four-year $36 million contract with the Titans after four seasons with the Tampa Bay Buccaneers, Humphries made three starts in 12 games and had only 37 catches for 374 yards – his lowest figures since 2015 – and two touchdowns.

The Titans can get out of Humphries’ contract next offseason and would save nearly $5 million in salary-cap space by doing so, according to Spotrac. However, a look at Humphries’ track record indicates he can produce at a high enough level to prevent them from parting ways with him.

The 2018 season is the pinnacle of the former Buccaneers wide receiver’s career so far. A game from that campaign is the subject of our latest look at the best individual performances by OSM from years gone by as we analyze Humphries’ Week 12 display in Tampa Bay’s 27-9 win over the San Francisco 49ers.

OSM measures a player’s influence on a team’s offensive production by using the NFL’s NextGen Stats and a series of algorithms to look at the factors only he could control. Humphries earned an elite grade of 57.04, the highest individual score by any wide receiver in 2018, despite relatively modest production.

He caught all of his six targets for 54 yards and a touchdown, with his fourth-quarter score effectively clinching the game. This was critical in helping him secure the top grade at his position.

Humphries’ touchdown came on a second-and-12 situation from just inside the 49ers’ 30-yard line, with the Buccaneers facing a long field goal attempt and a potentially costly turnover if they failed to move the ball.

After finding the soft spot in the zone, Humphries extends his route across the field to give Jameis Winston – rolling out to his right – a wide-open target. Winston hits him with a cross-body throw, and Humphries shows his ability in the open field to find the end zone, slicing between two deep defenders for the score.

Intelligence and awareness of the situation were the keys to Humphries’ touchdown but, for a player who did not impress athletically coming into the league, he has also proven himself to be an agile and nuanced route-runner.

Related | OSM Back to the Future: Phillip Dorsett’s top-ranked performance from 2016

Coming out of Clemson in 2015, Humphries did not excel in pre-draft testing. Quite the opposite actually, his testing from his pro day saw him record a poor Relative Athletic Score (RAS) of 4.19.

RAS is a composite metric on a 0 to 10 scale based on the average of all of the percentiles for each of the metrics a player completes at the combine or pro day. 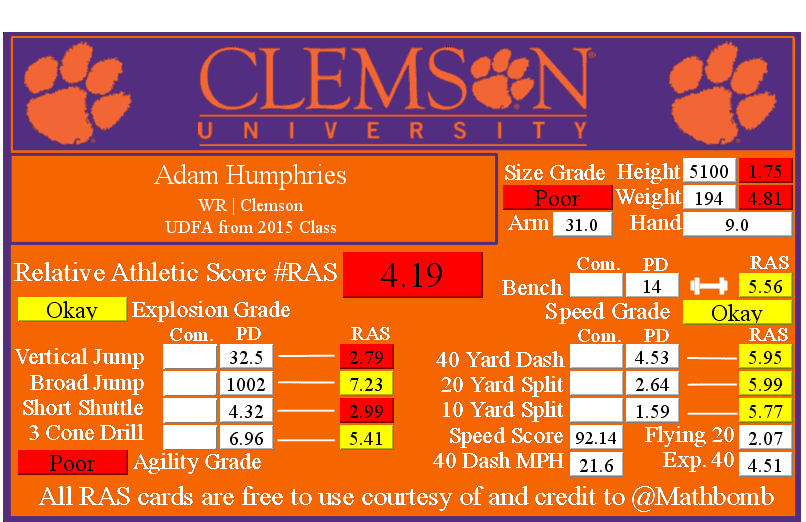 He was average in the speed metrics but struggled in the agility metrics, yet Humphries has overcome his supposed athletic shortcomings to win with his route-running in the NFL.

Humphries delivered a demonstration of his route-running ability during garbage time against the 49ers, allowing the Buccaneers to convert on third down.

Faced with physical coverage from K’Waun Williams, among the premier slot cornerbacks in the NFL, Humphries spins away to create separation and succeeds in falling forward to move the chains despite a powerful low hit from safety Marcell Harris.

These kinds of plays, when the game is well in hand, are quickly forgotten. However, that conversion undoubtedly played a role in improving Humphries’ OSM grade and is an example of the dependability that makes him a bounce-back candidate in his second season in Tennessee.

Related | OSM Back to the Future: Chester Rogers’ top-ranked performance from 2017

Humphries failed to replicate his 2018 production with the Titans in 2019, though his task in doing so was a challenging one given the Titans’ reliance on the run game. The Titans ran the ball on 49 percent of their offensive plays, per Sharp Football Stats. Only the 49ers and Baltimore Ravens leaned on the ground game more regularly.

Derrick Henry earned the bulk of the workload, the 2019 rushing champion carrying the ball a league-high 303 times. That is not sustainable, and Tennessee will likely have to put more onus on quarterback Ryan Tannehill to succeed in 2020.

Humphries stands to benefit from any shift towards the passing game from the Titans, who did not add a receiver capable of challenging him from the starting slot receiver role during the offseason. His display against the 49ers – while serving as another reminder that offensive players do not necessarily need to put up substantial numbers to score highly in OSM – showcased what he can do when he is a focal point of the passing game.

It was a game in which he demonstrated the value of experience and awareness by keeping himself alive in a play that ended in a crucial touchdown, which also owed to his prowess in the open field.

Humphries’ intangibles and his brilliance as a route-runner should make him an asset to Tannehill, who will need reliable targets beyond A.J. Brown if he is to thrive throwing the ball at a higher rate.

Entering the season at 27 years old, there is little reason to expect a sustained decline from Humphries. With what should be an expanded role in an offense in which he will be more comfortable, Humphries is in a position to have a more consistent influence on the Titans’ passing game. As his top-ranked OSM performance for the Buccaneers proved, when given a chance he is a receiver who can have a game-winning impact. That is what he will need to deliver regularly in 2020 for the Titans to keep him around beyond the upcoming season.

2021 AAC Championship Game Pick and Prediction: How to watch Houston vs. Cincinnati

2021 SEC Championship Game Pick and Prediction: How to watch Georgia vs. Alabama

What did the Washington Football Team do in free agency?