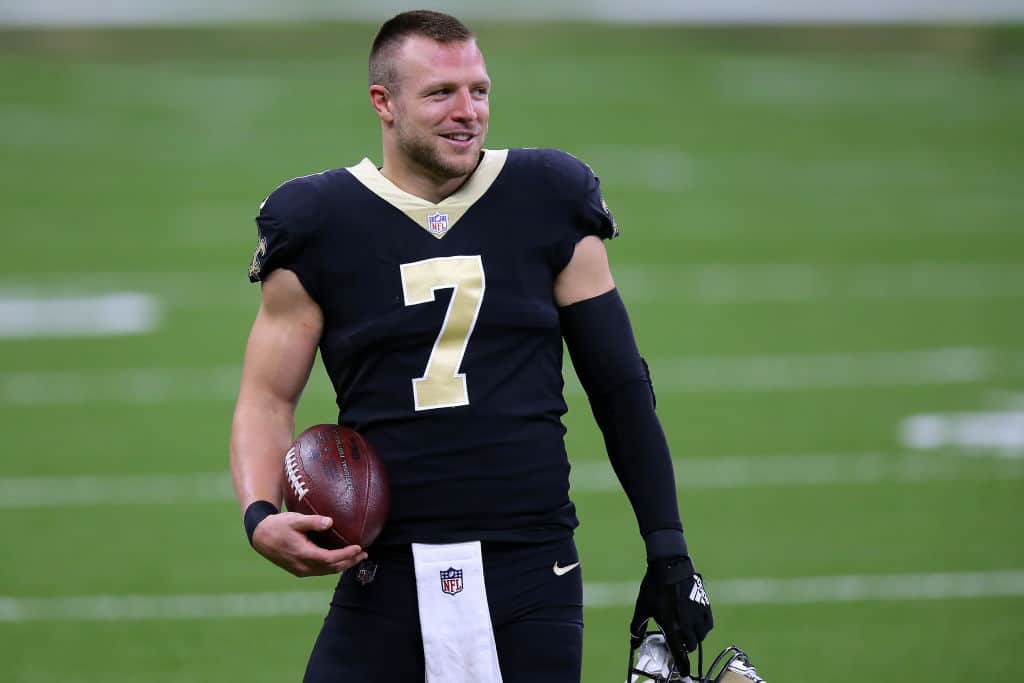 Time is running out on the 2020 fantasy football season, and the trade deadline is upon us. As we enter Week 12 of the NFL, finding those fantasy trade targets to buy low and sell high on is imperative. However, for some of you, the trade deadline has passed, especially in your seasonal leagues. Therefore, we will start to shift our attention to dynasty leagues and identify some trade targets, either in Week 12 or for you to have on your radar heading into the offseason.

It has been a tough season for Carson Wentz. His offensive line and pass-catching group have been a mess all season. However, Wentz has still been able to be a top-20 QB for fantasy, which is perhaps more impressive than his mediocre stat line would suggest. Wentz has done his best with the pieces he has had, but quite frankly, he has been on a hiding to nothing this season.

That is why the savvy dynasty player needs to be thinking about switching their focus to 2021 and why Wentz could be a valuable trade target to acquire for dynasty leagues in Week 12. The Eagles have quality pieces, both along the offensive line, out of the backfield, and in their pass-catching group. If Wentz has a healthy unit around him, he can certainly bounce back in a big way this season. With the Eagles sitting at 3-6-1 entering Week 12, acquiring him should not be very expensive at all.

If like me, you tuned into the Saints and Falcons game to examine what Taysom Hill might look like as a full-time QB, then you will have also noted the struggles of Matt Ryan. Ryan completed just 51.4 percent of his passes with two interceptions while being sacked eight times. With that game commanding so much attention, the likelihood is that the GM with Ryan on their roster is extremely frustrated coming out of the weekend.

However, in the four weeks leading into this game, Ryan had completed over 70 percent of his passes, with an average of 318.5 passing yards, eight touchdowns, and just two interceptions. So is the fickle nature of fantasy football, that Matt Ryan was likely a buy low entering Week 11, but now heading into Week 12 that has flipped completely to a potential sell high.

In the next few weeks, Ryan has some matchups he can take advantage of in the Las Vegas Raiders and Los Angeles Chargers. There are tough games on the schedule, but this Falcons offense can put up big numbers.

This is a shot in the dark, but there was a lot of discussion on the Saints broadcast about how the Taysom Hill offense may suit the style of Latavius Murray better than it suits Kamara. If the GM with Kamara on their team believes that, then you need to pounce now. This was Kamara’s second shaky performance in three weeks where a TD prevented the day from being a disaster.

Kamara was out-touched in this game by Murray, but that might have been a product of Kamara being limited in practice this week. With a new QB being worked in, that limit of practice time can be tough to overcome. Look for Kamara to be more heavily involved next week. If someone is freaking out about Kamara entering Week 12, then you should work out a deal, especially if they are willing to offer him out at a price that appears to be a buy low for you.

The frustrating 2020 season for JuJu Smith-Schuster continues with a five target, four reception for 19 receiving yards day. The whole Steelers offense has been an enigma this season, with different receivers rising and falling throughout the season. At times in 2020, it feels like every Steelers pass-catcher has been a buy low or sell high, and entering Week 12, it is time Smith-Schuster’s turn on the buy low side.

Despite having what is considered a down year, Smith-Schuster was leading the team in receiving yards, targets, receptions, and ranking second in touchdowns. Chase Claypool and Diontae Johnson knocked him off a couple of those spots this week, but he has by no means been a train wreck.

However, when considering Smith-Schuster among your trade targets in Week 12, it is not just about season-long leagues; his value in dynasty leagues is also intriguing. This is potentially Smith-Schuster’s final season in Pittsburgh, and a change of scenery might be just what he needs with the crowded receiver room in Pittsburgh right now.

This is not a knock on Taysom Hill. I wanted him to succeed this week, and I am delighted he did. The issue surrounds the sustainability of this offense. Every QB who has the run and pass mix that Hill has in his armory gets figured out sooner rather than later. Hill had a wonderful NFL debut as a pure QB, and the rushing elements of his game give him a great floor for fantasy but games of over 25 fantasy points will likely be the exception and not the norm down the stretch.

If you are playing in dynasty leagues, then Gibson is a player you cling onto because he appears to have an “it factor” that you look for in a back. However, in season-long leagues, there is an opportunity to exploit if you still can. Gibson has been extremely up and down this season, with less than 50 rushing yards in six of his last eight games. He is a touchdown threat and does rank in the top 20 in terms of Pro Football Network’s Consistency Score, but there is just enough concern for me around his inconsistency to be willing to move on.

In dynasty formats, you may want to wait a couple of weeks and hope he struggles so you can acquire him as a buy low, but entering Week 12, he is a sell high in redraft leagues.

If you are in a position in a dynasty league where you are not challenging in 2020, James Conner could be a potential trade target for a competing team in Week 12. Conner posted nice numbers, with three receptions and 99 total yards for a double-digit fantasy return. Sure he did not find the end zone and only had 16 total touches, so his value might be somewhat limited, but with a potential move away from Pittsburgh coming for the fourth-year back, getting anything usable in return is a bonus.

Chase Claypool just caught his eighth touchdown, his 10th total touchdown of the season, and saw at least eight targets for the fourth game in a row. Therefore, you may be thinking I have lost my mind recommending him a sell high. However, entering Week 12, there may not be a hotter name that can be floated among dynasty trade targets than Claypool. Still, with uncertainty surrounding how long Ben Roethlisberger will continue, it could be prudent to cash in.

We have all seen what the Steelers’ backup situation at QB looks like, and if Roethlisberger was to get injured or decide to retire during or after this season, Claypool could be looking at an uncertain future.