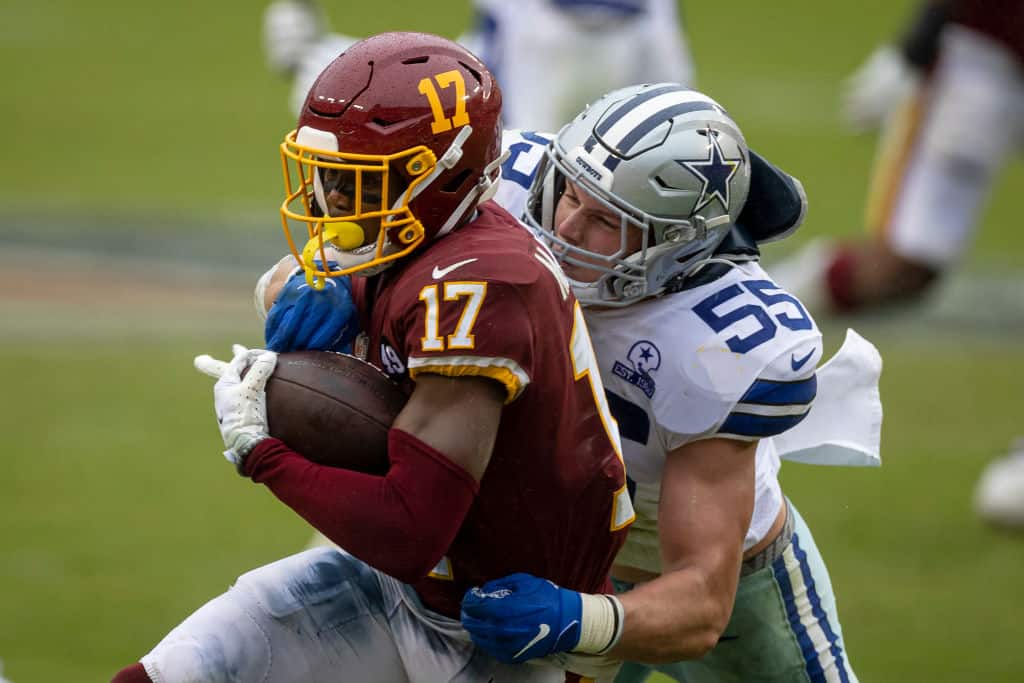 LANDOVER, MD - OCTOBER 25: Terry McLaurin #17 of the Washington Football Team makes a catch as Leighton Vander Esch #55 of the Dallas Cowboys makes a tackle during the second half at FedExField on October 25, 2020 in Landover, Maryland. (Photo by Scott Taetsch/Getty Images)

With the fantasy football playoffs beginning in the next couple of weeks, squeezing every point out of your fantasy football wide receiver room can be the difference between the postseason and a premature fantasy exit. Do you want to head to the postseason promised land but can’t decide which fantasy wide receiver to roll with? Are you unsure who to start between Marquise Brown or Antonio Brown? All the information you could need to help you get a winning week from your fantasy football wide receiver room is right here with our Week 12 fantasy WR rankings. Who are the sleepers, must starts, and fantasy busts for Week 12?

Thanksgiving is just around the corner, and one thing fantasy football players can be thankful for this week is a schedule that features no teams on a bye week. All 32 NFL teams are in action, so there is no need for last-minute scrambling to find a replacement for your star fantasy football wide receiver.

One thing to remember from a fantasy football perspective is that Thanksgiving brings three Thursday Night Football games. It’s a Thanksgiving football feast but make sure you alter your line up early. The Houston Texans, Detroit Lions, Washington Football Team, Dallas Cowboys, Baltimore Ravens, and Pittsburgh Steelers are the six teams in action, and one pass catcher in that group is featured very highly in our Week 12 fantasy WR rankings.

There may be no byes this week, but there will almost certainly be injury issues to contend with, especially with so many teams on a short week. Kenny Golladay and Calvin Ridley are just two high scoring wide receivers who have missed action in recent weeks, but they should return to the field in time for these Week 12 matchups.

Diggs returns from a bye week with a difficult matchup against the Los Angeles Chargers, who are allowing just 20.9 fantasy points per game. However, Diggs leads all fantasy football wide receivers in fantasy points prior to the bye and crucially in PPR leagues also leads the NFL in targets. His consistency score of 7.95 is the highest in the NFL, demonstrating his ability to consistently put up huge points.

There are not many favorable matchups for the highest-scoring fantasy football wide receivers this week, but Metcalf has one of the best. The Philadelphia Eagles have allowed 22.9 fantasy points to the position this season. Metcalf continues to have a slight edge over teammate Tyler Lockett in total fantasy points and points per game despite seeing fewer targets. That gives him the edge in our fantasy WR rankings for Week 12.

McLaurin features in the top 10 for total points (154.7), targets (86), and yards per game (87.4) and will benefit from having Alex Smith rather than Dwayne Haskins or Kyle Allen under center for the rest of the season. McLaurin has arguably the best matchup of any fantasy wide receiver in Week 12. The Dallas Cowboys have allowed the second-most points per game to the position in the NFL, averaging 30.6 points per game, and prior to Week 11, had allowed the most touchdowns in the league.

Hopkins has the second-most fantasy points per game (19.5) and has a good matchup against a New England Patriots defense that has given up 22.1 points per game to the wide receiver position. After a disappointing Week 11 fantasy performance against the Seattle Seahawks, you can expect a bounce-back for Hopkins, which is why he features highly in our week 12 WR rankings. He has scored 20+ points in the week following a game where he has scored 10 points or less on two occasions this season.

Although the Tampa Bay Buccaneers have had one of the best defenses in the NFL this season, they have allowed 20.6 points to fantasy wide receivers. Hill has been one of the most consistent fantasy wide receivers through this 2020 season, with the second-highest consistency score (7.01). Prior to Week 11, he tied the lead for most touchdowns in the NFL and has been averaging 19.5 points per game. He will once again lead the Chiefs in targets ahead of Sammy Watkins and Mecole Hardman.

Despite the return of Allen Lazard and the emergence of Marquez Valdes-Scantling, Adams remains a must-have fantasy wide receiver. Adams has a tough matchup with the Chicago Bears, who have allowed just 18 points per game to the position this season. Adams still earns a place in our Week 12 fantasy WR rankings as he leads the league in fantasy points per game by a considerable margin (26.7) and has been a consistent high scorer for fantasy owners this year.

Allen continues to be the go-to target for rookie quarterback Justin Herbert, securing the third-most targets in the NFL so far this season. He continues to be a fixture in our fantasy WR rankings, and Week 12 is no exception as he faces a Buffalo Bills unit that has allowed nine touchdowns and 21.4 points per game to the wide receiver position.

Lockett ranks sixth in the NFL for total points (168.1), points per game (18.7), and touchdowns (7) ahead of Week 11, and he can be expected to continue that strong performance against the Eagles. He sits behind teammate Metcalf in the Week 12 fantasy WR rankings as the least consistent of the two options, with a consistency score of 4.93 ranking 10th out of all fantasy football wide receivers.

Anderson sneaks into the top 10 of our Week 12 fantasy WR rankings with a fantastic matchup against the Minnesota Vikings. The Carolina Panthers pass catcher faces a unit that has allowed the most touchdowns in the NFL through 10 weeks and is averaging 29.5 points per game allowed to the wide receiver position. Much will depend on the injury status of quarterback Teddy Bridgewater prior to this Week 12 matchup, but Anderson has the fifth-most targets in the NFL and the 10th most yards per game.

The final spot in Tier 1 of our Week 12 fantasy WR rankings was a hotly fought contest between several fantasy football wide receivers. Ridley won out on a number of factors, starting with his matchup against the Las Vegas Raiders. They’ve allowed 24.5 points per game through 10 weeks of the NFL season with an average of 175 yards per game. Ridley is averaging 18.5 points per game, the seventh-most in the NFL, and has the eight most yards per game (92.1) and touchdowns (6).