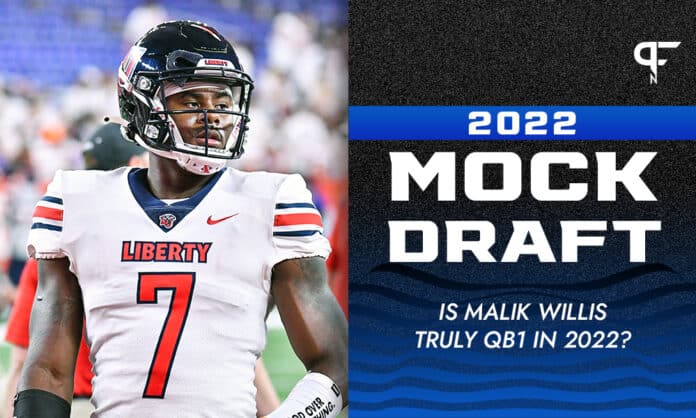 A 2022 NFL Mock Draft in October? Of course. We’re in the thick of both the college football and NFL season, and the picture has become a little more clear for the NFL Draft. One thing worth noting: the picture is muddy when it comes to college football’s top quarterback.

Let’s get this one-round mock draft started with the Detroit Lions.

The Lions have had a string of bad luck to begin the 2021 NFL season. They need a game-changing playmaker on the defensive side of the ball.

Enter Kayvon Thibodeaux. The 2022 NFL Draft is stockpiled with pass-rushing talent, and he’s the best of the bunch. Expectations will be high for Thibodeaux in Detroit, especially with the lack of offensive talent on the roster. However, the Lions will get another chance to address that side of the ball later in Round 1.

It’s rinse and repeat for the Jacksonville Jaguars. Again, they’re drafting in the top five in this mock draft, meaning they’re once again one of the worst teams in the league.

Quarterback Trevor Lawrence is supposed to be the savior for DUVAL, but he can’t survive without help up front. Alabama’s Evan Neal is a large tackle that should easily hold his own in the AFC South.

The Philadelphia Eagles have longed for some help in their secondary. With both Rodney McLeod and Anthony Harris set to hit free agency in 2022, that need on the backend becomes even more prevalent.

Third overall might sound high for a safety, but Notre Dame’s Kyle Hamilton can do it all from playing the deep third of the field to up near the line of scrimmage. An all-around playmaker, this is a great start to what should be a loaded first-round class for the Eagles.

The new era for the New York Jets has gotten off to a rocky start, as many expected. New head coach, new quarterback. Growing pains are to be expected. Year 2 for the rebuild will be crucial, so they’ll need to hit on both their first-round picks.

Robert Saleh is a defensive-minded coach, and he’ll want to shore up one of the most important spots: cornerback. Kaiir Elam is one of the best in this year’s draft, who might have an edge being the first taken due to injury. Elam will shore up the Jets’ pedestrian secondary from Day 1.

A roster depleted of talent and missing their Pro Bowl quarterback, most knew the Houston Texans had an uphill battle to compete in 2021. With Deshaun Watson not expected to return as Houston’s starter, it might make sense for the Texans to address the position here. However, the 2022 QB class isn’t great, and Davis Mills might be a serviceable option to start a rebuild.

Yet, through five games, only one wide receiver has more than 10 receptions — veteran Brandin Cooks. Ohio State’s Chris Olave is one of the top pass catchers and route runners in this class. He’ll immediately provide star power to an offense bereft of some.

The Indianapolis Colts offensive line is holding the team back. After tearing his Achilles in January, Eric Fisher came in as a free agent on a one-year deal, but he’s been bad.

Consistent quarterback play begins with help up front, which Nicholas Petit-Frere can provide for Carson Wentz. Not only that, Petit-Frere is a mauler in the run game, utilizing his athleticism and power from his 6’5″ frame.

Many anticipated a tough season for the New York Giants, and that’s what we’ve witnessed. Joe Judge currently sits on the hot seat in large part because of the offense’s lack of ability to move the football.

The Giants haven’t had consistent offensive line play in years. They invested in Georgia’s Andrew Thomas just a couple of years ago and now Texas A&M’s Kenyon Green in this 2022 NFL Mock Draft. At 6’4″ and 325 pounds, he’ll provide plenty of holes for Saquon Barkley to run through.

Quarterback Matt Ryan might not be where he was five years ago, but he can still sling it across the field. However, the time is coming soon for him to pass the torch to the new leader of the Atlanta Falcons offense.

Malik Willis is the first quarterback taken in this 2022 NFL Mock Draft. While the class is less than spectacular this year, that doesn’t take anything away from the talent Willis possesses. After transferring from Auburn, he’s put Liberty on the college football map, and now he’ll look to put his hometown on the NFL map.

So far, Mac Jones looks to be a solid pick for the Patriots at quarterback. They’re far from competing, however, with multiple holes across the roster. One that opened up recently was at cornerback, with the release of Pro Bowl cornerback Stephon Gilmore.

Noted earlier, the Eagles are slated to lose two safeties in the spring. Add to that two defensive ends in Brandon Graham and Derek Barnett. While Leal has the versatility to play along the line, next to Fletcher Cox would create one of the toughest defensive interiors throughout the league.

The Miami Dolphins have been awful in 2021. That’s putting it nicely. The offense is a mess, and the defense — who was supposed to lead this team — hasn’t looked any better. There’s not a bigger hole on the team than on the offensive line.

None of the draft capital they’ve invested in the line has panned out outside of possibly tackle-turned-guard Robert Hunt. Iowa’s Tyler Linderbaum is not only one of the top talents on the offensive side of the ball, but he’s one of the safest. Miami needs a commander up front, which is what Linderbaum can be.

The Jets addressed their secondary with the third-overall pick in this 2022 NFL Mock Draft. Now, they add a beast up front in Purdue’s George Karlaftis.

“Karlaftis has the tools to be an impactful pass rusher at the next level. His hand usage allows him too overcome offensive tackles around the edge. Moreover, the Greece product has demonstrated several pass-rush moves in his arsenal.”

It was just a few years ago the Washington Football Team selected their quarterback of the future. It didn’t take but a year to realize Dwayne Haskins was anything but. Now, they’re back in picking in the top half of the NFL Draft needing a new savior.

Nevada’s Carson Strong has been incredibly efficient this year, passing for 14 touchdowns to just 3 interceptions. While he doesn’t light up the box score each week, Strong takes care of the ball and efficiently moves the Wolf Pack offense down the field each week. The only thing working against Strong is his medical history, but until noted otherwise, he’s in QB1 discussion.

It’s time, Steelers fans. Ben Roethlisberger has created a number of great memories for Pittsburgh, but all great things must come to an end. And we can all agree Mason Rudolph isn’t the man to replace him.

Matt Corral, however, has come onto the scene in 2021 in a big way. He has the Ole Miss football team ranked 13th in the country after a shootout with Arkansas this past weekend. Yet to throw an interception in this season, he’s one of the leading candidates to win the Heisman Trophy in December.

When the Minnesota Vikings are at their best, they have a strong pass-rushing unit. Danielle Hunter is one piece of that puzzle. If Mike Zimmer is still in Minnesota in 2022, he’ll hope a prospect like Drake Jackson can be that other piece.

At 6’5″, 230 pounds, Jackson has versatility rushing the passer and dropping back in coverage. Zimmer would want Jackson to bulk up more at the NFL level and put his hand in the dirt. Still, it’s tough to pass up a talent like Jackson here.

Let’s get right into it. The Kansas City Chiefs defense has been an eyesore in 2021. While the offense puts up over 30 points per game, the defense gives up a league’s worst 32.6. Even with Patrick Mahomes on the other side of the ball, Kansas City can forget any Super Bowl hopes until it’s fixed.

Andrew Booth has been a name to watch on Clemson’s defense for a couple of years now. Booth is in CB1 discussion, especially after Stingley Jr.’s injury. He won’t receive the hype in season solely due to the Tigers’ down year, but he has potential to start right away opposite L’Jarius Sneed on the Chiefs’ defense.