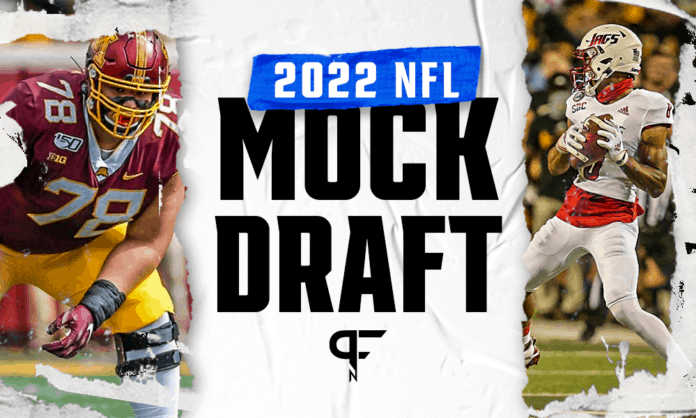 Who will be the first QB selected in the 2022 NFL Draft? The best defensive players dominate the top 10 picks in this 2022 NFL Mock Draft.

Here we go again. The 2022 NFL Mock Draft circuit continues. We officially have enough data and film on NFL Draft prospects through the college football season to make appropriate assumptions.

For the first time in what feels like half a decade, this year’s iteration of the NFL Draft lacks a clear-cut No. 1 quarterback. Through four weeks of college football, we haven’t seen a quarterback rise to the top.

As such, the 2022 NFL Draft may actually fall in line with the idea of best player available with the first few picks. This 2022 NFL Mock Draft is no different.

Here is how things could shake out. Most importantly, here are some names to know as potential ‘BPA’ or best player available.

There is no denying that Kayvon Thibodeaux is the best player in college football. His impact on the game is similar to that of a quarterback on defense. With some of the best pass-rushing moves and athleticism at the position in some time, the best player available goes in the top spot.

If you haven’t watched Kyle Hamilton play football, that’s a shame. A patroller of center field, a run-stuffing threat, Hamilton truly can do it all. And he does it with a frame of 6’4″, 220 pounds. Think of a Derwin James level of elite play without the injuries — that’s who the Lions grab.

It feels longer than 2.5 seasons that we’ve heard Derek Stingley Jr. is a “generational talent.” Still, every time he makes one of his Stingley-esque plays, we’re reminded of the truth behind that statement. The Jaguars are a few players away from being competent on defense, but a lockdown cornerback should help start a new defensive regime.

It’s becoming quite clear what the Jets’ biggest discrepancy is on offense: OL play. Even with Mekhi Becton kicking off his career on a promising note, his ACL injury puts his expectations on hold. It also showcased a big weakness in terms of depth on their offensive line. Evan Neal‘s entrance anchors either side of the offensive line for Zach Wilson and Co.

The Bengals passed on Penei Sewell last year, which is starting to look like a mistake. Even if Ja’Marr Chase pans out as he has so far, QB Joe Burrow may not have enough time to even get him the ball. They don’t miss in this 2022 NFL Mock Draft with Kenyon Green.

A dynamic and versatile athlete, Green can plug and play either one of the interior offensive line positions. He’s dominant at both levels and can block incredibly well in passing sets.

Still a relatively young pass rusher, George Karlaftis is continuing to hone his craft. That should frighten NFL tackles who have to go up against him as he’ll only continue to get better. It’s not a matter of when Karlaftis gets selected — it’ll be Day 1. It’s just a matter of how high he’s chosen.

The fall of the “Preseason QB1s” continues as Carson Strong usurps Spencer Rattler and Sam Howell. His dominance so far this season has shown NFL-caliber accuracy to all levels of the field. He’s dotting I’s and crossing T’s with every performance.

Philadelphia knows they’re limited with Jalen Hurts as a passer. They will not have that kind of issue with Strong.

The Raiders have seen what stellar cornerback play has done for them through the first few weeks of the 2021 season. With Casey Hayward proving to be a great signing, his age gives way to a new face on the outside in Andrew Booth Jr. A talented but rather raw cornerback, Booth can make all sorts of plays on the ball in coverage with no real concerns elsewhere.

Daniel Jones may not be the best quarterback in his division, but he’s shown the ability to at least put the Giants in position to win games during his tenure. If he continues on his current trajectory, there’s no reason to suspect he isn’t the starting signal-caller in 2022.

With that in mind, it’s time to get him some protection so he doesn’t have to be Superman. Tyler Linderbaum fills an instant hole at center as he’s the best pure prospect at the position in some time.

The Atlanta Falcons have clearly had more success than any other team in history with a fast, mobile, accurate thrower of the football. We’re not talking about Matt Ryan here. As the Ryan days are coming to a close in Atlanta, it’s time to find the heir apparent.

Malik Willis has proven to be much more than the description above, yet his skill set does indeed lend itself to early success in the NFL with his athletic ability. The best part about Willis’ game is that he has all the arm talent in the world to rely on before even attempting to use his dual-threat ability.

Trevor Penning — get to know the name now. Likely an NFL Scouting Combine darling or even a Senior Bowl favorite before, Penning should rocket up draft boards once people start paying attention. As Tony Pauline said on Between the Hashes, Penning could even be selected higher than Alabama’s Evan Neal, who goes No. 4 in this 2022 NFL Mock Draft.

Just throw on the Northern Iowa tape and see for yourself. Stout and strong, long and lean, Penning has it all. He’s also dominated at the FCS level — as he should.

Matt Corral‘s ascension to the top is something to behold. Sure he’s the third quarterback selected here, but he’s firmly above Rattler and Howell, which is saying something. Corral is a dominant athlete but proving to be an elite thrower.

Some of Corral’s throws to the middle of the field are perfect examples of layering passes over or under defenses. His short-area accuracy needs a touch of work, but his big-play potential and ball security have been among the best in the country this season.

Drake Jackson is a game-wrecker — there are no two ways around that. His speed and get-off are among the best in the nation. With more than a handful of pass-rush moves at his disposal, Jackson is the heir apparent to J.J. Watt in Arizona. He can handle any tackle in front of him and chase down any quarterback with his superior athleticism.

A big gap on the Steelers’ defensive front reared its ugly head this season when they lost Tyson Alualu to injury. T.J. Watt can only do so much and Cam Heyward is getting long in the tooth. DeMarvin Leal is a pass-rushing specialist with terrific all-around ability. At 6’4″, 290, he fits into the Steelers’ mold of long, athletic interior pass rushers like Heyward.

This is perhaps one of the more perfect fits in this 2022 NFL Mock Draft.

What happens to Spencer Rattler through the remaining portion of the 2021 college football season will obviously have ramifications for the 2022 NFL Draft. He could even decide to return to Norman for one more season, throwing everything for a loop. Still, through three games in 2021, he hasn’t played like the best quarterback in the country nor the top draft-eligible signal-caller.

Rattler still possesses a ton of upside and potential. He’s got a terrific arm and next-level smarts. His decision-making is sharp, but his accuracy to all levels of the field has fallen off in 2021. Sharper throws and clearer decisions on his reads can vault him back up. Nonetheless, the Broncos have to love this possibility.

Sorry, Vikings fans, there is no kicker worthy of being taken here. In fact, there aren’t many positions of need available for the Vikings, so they turn to the best-player-available mantra. Aidan Hutchinson has been dominant in 2021, and if his production levels continue through Big Ten play, he could hear his name called way earlier.

A freaky athlete, Hutchinson’s 265-pound, 6’6″ presence opposite Danielle Hunter could give Minnesota one of the league’s most feared pass-rushing duos.