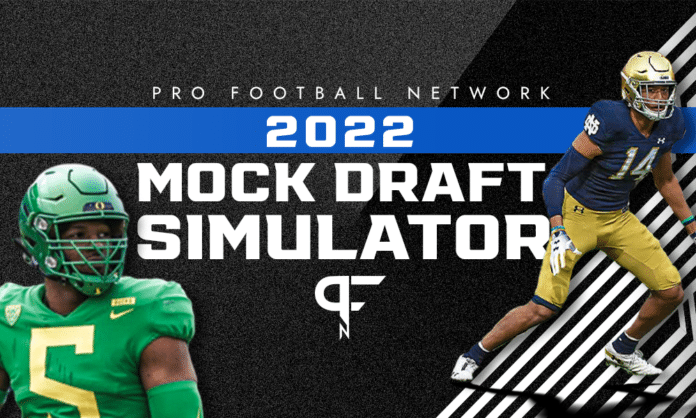 2022 NFL Mock Draft: Atlanta, Jacksonville, Denver double up in Round 1

With one week of NFL action in the books, let's take a look at what the MDS has in store in our latest 2022 NFL Mock Draft.

Here’s who closes out the second half of our latest MDS mock draft.

The Dolphins are starting Michael Deiter at center, but they might want a more natural, well-leveraged player in Tyler Linderbaum. Linderbaum is the best center in the 2022 NFL Draft. He’s a stellar athlete with a wrestling mentality, and he can lock down the middle of the line. Linderbaum’s presence would allow Deiter to kick back out to guard.

After selecting Thibodeaux with the first overall pick, the Texans trade back into the first round and get a potential successor to Tyrod Taylor. Would Malik Willis be behind Taylor on the depth chart? Taylor’s starting spot would be in serious danger. Willis has elite athleticism and arm talent, and if Houston starts him on the bench, he won’t be there for long.

It’s been a perplexing first round for the Patriots, so bear with me for a second. Apparently, NE traded back from 17th to 27th, then traded back up with the Eagles to 19th. The MDS must have loved the trade gymnastics the Dolphins deployed last year trading back and then back up. Nonetheless, there’s nothing quirky about the selection of Jordan Battle. He’s an instinctive player with great upside beside Kyle Dugger.

Rasheed Walker has high-level traits. The question has always been whether he can string together consistency. So far this year, he hasn’t done that — but it’s a long season. His upcoming test against the Auburn Tigers will be big, as the Tigers have an embarrassment of riches on the edge. If Walker performs well, he could play himself into an NFL starting gig.

Tyron Smith’s health can change things, but I personally don’t see tackle as a Round 1 need for Dallas. Smith is one of the best in the league when healthy, and La’el Collins is under contract until 2025. They need high-end depth for when Smith moves on, but they can get that later. If the Zion Nelson pick was made with the intent of confusing Cowboys fans, though, I’m on board with that.

Most 2022 NFL mock drafts will have the Saints taking whichever Ohio State wide receiver is left on the board at this pick. This time, it’s Garrett Wilson. If you ask PFN, the Saints come away with a steal. Wilson is a hair over Olave on our Top 50 Big Board. His combination of explosiveness, separation skill, and contested-catch ability is unmatched.

Charles Cross had a shaky start to the season, but he rebounded in Week 2 and earned SEC Offensive Lineman of the Week honors. He’s athletic and long with a lean frame for his size. It takes a lot to get around the edge against Cross, and that alone gives him great potential at the next level. If he can improve his play strength, the Titans will benefit.

You’ve got your quarterback. You picked Kyle Hamilton. Now, you can have some fun if you’re the Jets. Running backs are luxury picks, and one could argue that the Jets still aren’t in luxury territory. Nevertheless, Isaiah Spiller is a great player, and he’s starting to run away with the RB1 mantle. He’s explosive, physical, and a great receiver.

Aidan Hutchinson has been dominant so far this season. He opened the year with a tremendous outing against Western Michigan, then bested fellow draft prospect Jaxson Kirkland in Week 2. Hutchinson has always had the hand speed and ferocity, but he’s playing to his athletic potential this year. That’s scary — for everyone except Cleveland.

Maybe the MDS is content with Jared Goff — or maybe it just doesn’t like the Lions. Either way, Detroit trades out of Round 1 here, presumably acquiring two early Day 2 picks, while the Jaguars take tight end Jalen Wydermyer. A big-bodied pass catcher with toughness and resolve, Wydermyer is another weapon for Trevor Lawrence.

Remember when the Eagles traded back from 19th to 27th? Well, now they’re trading out of the first round in this 2022 NFL Mock Draft. Meanwhile, the Broncos are moving back up to take their next franchise quarterback in Carson Strong. Behind Denver’s offensive line, Strong will have time to deal. And when he has protection, he can be the best QB in the class.

In what seems to be a mass exodus from Round 1 inspired by the Rams, the Ravens are also moving to the second round, swapping picks with the Falcons. Atlanta capitalizes in this 2022 NFL Mock Draft by taking Myjai Sanders. Sanders is a long, lean edge rusher with great burst and bend capacity, and he can add a much-needed pass-rushing presence for Dean Pees.

Elgton Jenkins is great no matter where he plays, but the Packers should do what they can to keep him on the interior, where he earned a Pro Bowl nod in 2020. Sean Rhyan is a great pick with that purpose in mind. Rhyan is an athletic, powerful blocker with a nasty disposition and a gift for moving defenders downfield on run-blocking reps.

When you’re the Chiefs, you can afford to make a slight jump for your guy. That’s what Kansas City does here. Drake London has a great combination of size and run-after-catch ability, and he provides an interesting dynamic alongside the Chiefs’ speed threats.

This is an extremely intriguing pick. After Week 1, Zach Harrison was trending into top-15 territory. Now, he’s slipping again, after his lack of bend was on display in Week 2. He has the explosiveness and length to be a force on the edge, but I also like how Harrison projects into a William Gholston-type role (were he to put on 10-20 pounds).

We may need to talk about offensive line as a more pressing need for Buffalo if they continue to falter against high-quality pass-rushing units. But for now, the secondary remains the top need on our list. Daxton Hill has the fluidity to play in the slot, but he can also rotate back and cover a lot of ground with his explosive burst.