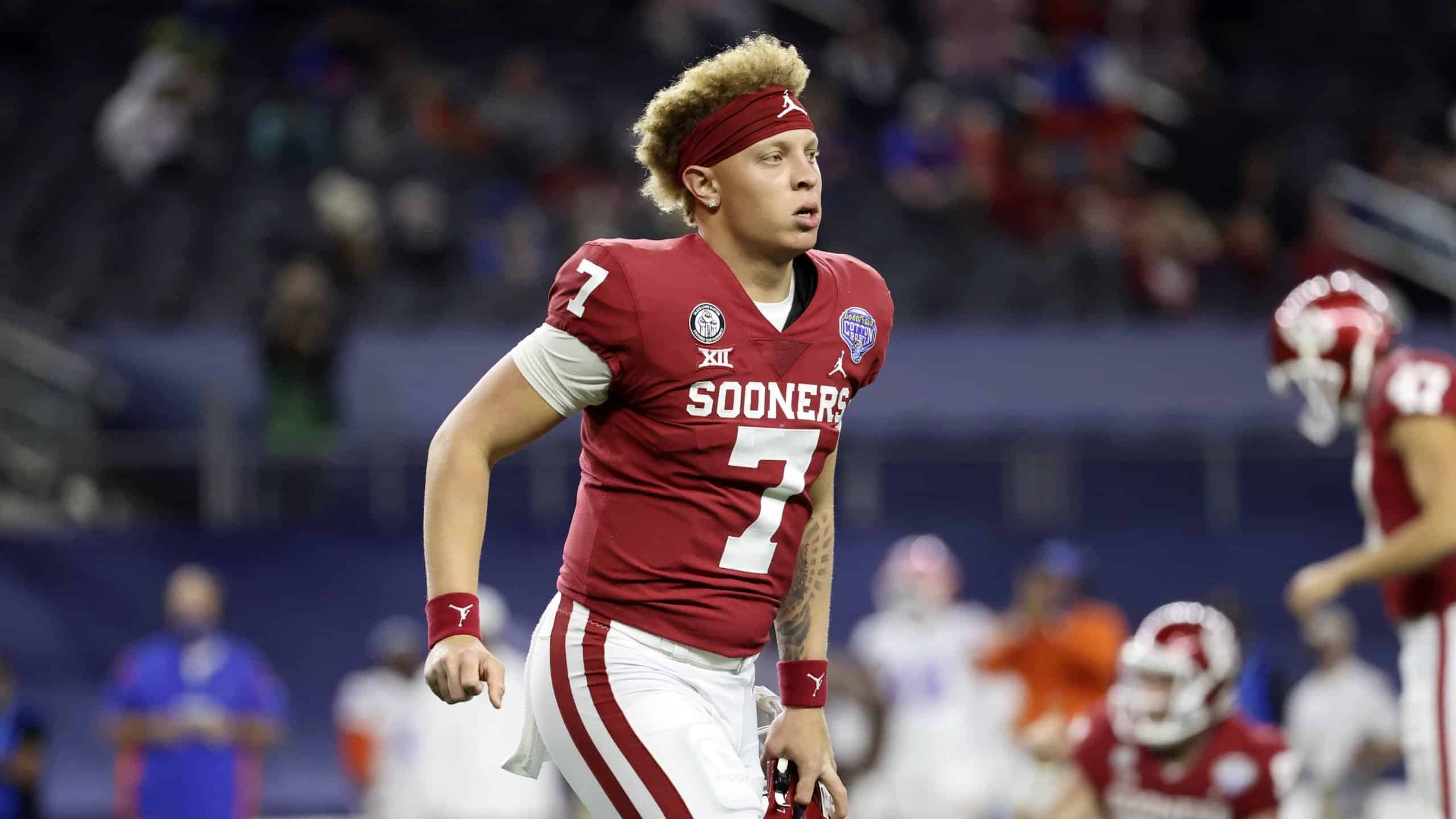 With 16 picks wrapped up, who will be selected in the second half of the first round?

With uncertainty over the cornerback position still looming, it wouldn’t be a surprise to see the New England Patriots strike for Andrew Booth or Ahmad Gardner with the 17th overall pick.

Still, with the top wide receiver in the class in Chris Olave on the board in this 2022 NFL Mock Draft, it would be foolish not to find Mac Jones a potent pass-catching weapon. Olave has the speed and route-running skills to be a potent threat as a true WR1 in the NFL.

Tight end was considered a priority need for the Los Angeles Chargers prior to this year’s draft. Although they secured Georgia’s Tre’ McKitty in the third round, he is somewhat of an unknown quantity after being used sparingly in the Bulldogs’ offense.

Texas A&M’s Jalen Wydermyer is the real deal at the position, and for me, he is comfortably the best in the 2022 NFL Draft class. He’s a physical specimen who displays blocking skills as well as savvy route-running and pass-catching ability.

The Dallas Cowboys went into the 2021 NFL Draft with a significant need at safety. Although they selected Israel Mukuamu late, and he can play safety in the NFL, he doesn’t move the needle in terms of an immediate impact.

The selection of Jordan Battle in this 2022 NFL Mock Draft may feel like a reach, but it fills a huge need. Additionally, the 6-foot-1 safety displays all-around explosive ability at the position. An impressive season leading the Alabama secondary should shoot up his draft stock.

Having secured a playmaker in the secondary with their first pick in this 2022 NFL Mock Draft, the Eagles double-dip on defense with Ohio State’s Zach Harrison. Despite an imposing 6-foot-6, 265-pound frame, Harrison displays impressive speed in addition to playing with strength. He will need to demonstrate some development this season but can be a first-round pick this time next year.

With several inside linebackers on concluding deals, this could be a landing spot for Alabama’s Christian Harris. Regardless, the Tennessee Titans currently have a lack of discernible talent at the wide receiver position. They remedy that with the selection of Arkansas wide receiver Treylon Burks.

The 6-foot-3, 225-pound pass catcher is an obvious end-zone threat, but Burks has surprising speed for his size as well. He also brings physicality as a downfield blocker in the run game.

A transfer this spring from Memphis, if you don’t know about Obinna Eze right now, then you should get acquainted with him. His season playing at a Power Five program should ensure he begins to receive the attention he deserves.

Eze is strong and athletic. At 6-foot-8, he presents as something of a roadblock on the end of the offensive line. The Indianapolis Colts didn’t address the offensive tackle position in this year’s draft, opting to add Eric Fisher as a free agent. Eze can become the long-term option at left tackle.

The defensive overhaul for the Jets continues in this 2022 NFL Mock Draft. Linebacker Jarrad Davis is out of contract at the end of the season. Even then, the linebacker room is uninspiring at best. Christian Harris being available represents a bargain as he is the 16th player on our current big board. Some question marks over coverage ability cloud his projection, but Harris has good size for the position and plays the position with tenacity against the run.

At present, the only quarterback that the New Orleans Saints have under contract into the 2022 season is the recently drafted Ian Book. If their projection as a playoff team holds true, then it is presumed that one of Jameis Winston or Taysom Hill will have done enough to win an extension.

Their reward is a shiny new wide receiver weapon in the form of Ohio State’s Garrett Wilson. Although his teammate Olave gets a lot of attention, Wilson bested him in terms of yards per catch last season. A reliable pair of hands, he also demonstrates an excellent ability to gain separation.

The Cleveland Browns had one of the best draft classes in the NFL this year. How they follow that up will very much depend on the performance of Jadeveon Clowney. If he fails to produce, expect the Browns to be in the market for a pass rusher in Round 1.

That’s exactly what they do in this 2022 NFL Mock Draft. Myjai Sanders was an ascending prospect before his return to Cincinnati. He’s a similar build to Clowney and possesses agility, explosiveness, and some technical savvy.

There are two ways the Dolphins could go here due to offseason moves and expiring deals. Running back could still be a need dependant on the performance of rookie Gerrid Doaks.

If that is the direction, Texas A&M’s Isaiah Spiller would be the man for the job. Yet, adding an elite center like Iowa’s Tyler Linderbaum could be the final piece to complete the offensive line. He’s athletic, intelligent, strong, and comes with a nasty streak.

With initial reports suggesting that recent draftee Brandon Stephens will play safety, the Baltimore Ravens could use depth at the cornerback position. Furthermore, Jimmy Smith’s contract expires at the end of the season.

An impressive performance in the Clemson spring game has turned many analysts on to Andrew Booth. He uses his impressive length to be a playmaking threat in the secondary. Booth has the opportunity to reinforce his draft stock with consistent performances as a full-time starter in 2021.

With seven wide receivers on expiring deals, the Lions opt to use the second of their first-round picks to give their new QB a game-changing pass-catching threat. John Metchie III demonstrated his ability last season. He stepped up to the tune of 916 yards and 6 touchdowns when Jaylen Waddle injured his ankle. Metchie would provide a true speed threat for the Lions’ offense.

The Green Bay Packers added Boston College linebacker Isaiah McDuffie in this year’s draft. Still, solidifying the center of the linebacker group should be a priority. Florida’s Ventrell Miller would make a significant impact against the run. That is something that was a big issue for the Packers last season. He also possesses decent coverage skills to ensure he can stay on the field on all three downs.

Drafting a wide receiver has become somewhat of a joke against the franchise. They have eight pass catchers out of contract at the end of the season. Despite not taking that direction in this 2022 NFL Mock Draft, it shouldn’t be ruled out as a consideration.

Ahead of the 2021 NFL Draft, I had cornerback pegged as one of the Buffalo Bills’ top needs. Yet, they only added Rachad Wildgoose in the sixth round. As a result, it would be a surprise if they don’t make a move at the position next year. Ohio State cornerback Sevyn Banks has the requisite frame to play the position in the NFL. He also brings athleticism and versatility to the position.

The Tampa Bay Buccaneers achieved the remarkable feat of returning their entire Super Bowl-winning team for the 2021 NFL season. With most of those players on one-year deals, however, there is potential for a mass exodus after the 2021 season.

With Ndamukong Suh likely to be one departure, the Buccaneers add defensive tackle depth with Oklahoma’s Perrion Winfrey. He may lack the hulking size of a Suh, but Winfrey has been productive at the JUCO and FBS levels with a combination of length and explosion.

There’s the potential for the Kansas City Chiefs to address a pass-rush need, with someone like Aidan Hutchinson or Kingsley Enagbare here. However, the recent trade for Mike Hughes indicates that they aren’t happy with their cornerback depth.

Hughes is unlikely to be a game-changer at the position, but Cincinnati’s Ahmad Gardner could be. At 6-foot-2, Gardner has NFL-ready size. He also offers fluidity and football intelligence with the final pick of this 2022 NFL Mock Draft.