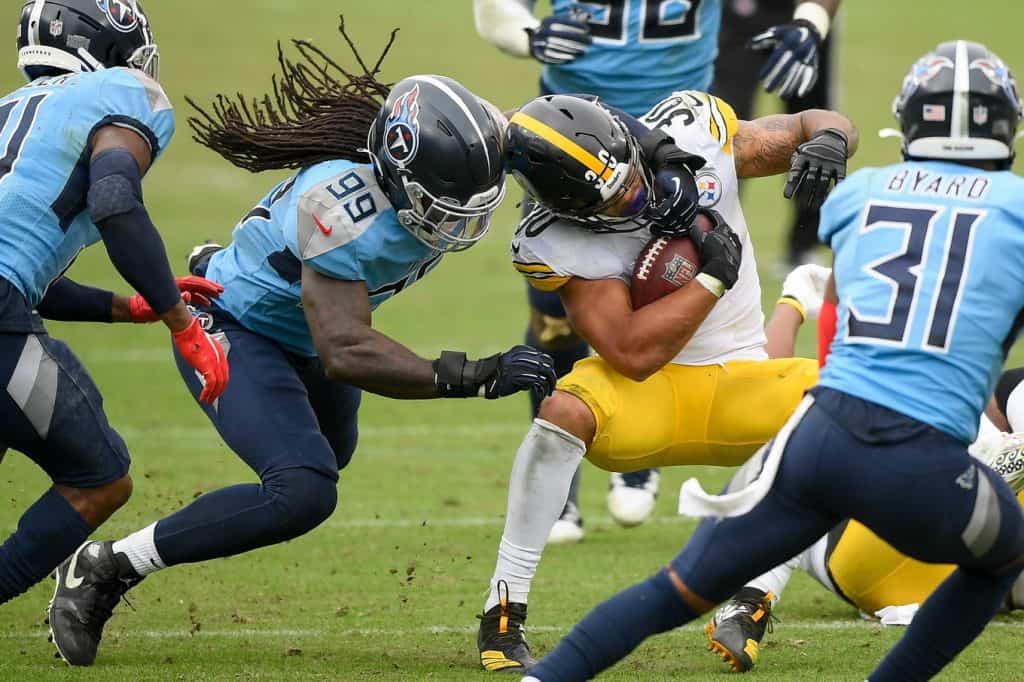 Tennessee Titans outside linebacker Jadeveon Clowney (99) tackles Pittsburgh Steelers running back James Conner (30) during the fourth quarter at Nissan Stadium in Nashville, Tenn., Sunday, Oct. 25, 2020. Titans Steelers 102520 An 034
What's in this article? Click to show
Jadeveon Clowney: The Origin Story
Clowney and the Browns: Perfect together
What’s next for Clowney and the Browns
Want more NFL news and analysis?

The lower your expectations for Jadeveon Clowney, the better Clowney looks. And that’s what makes Clowney such a great signing for the Cleveland Browns.

It’s a testament to how far the Browns organization has come in the past year that they just signed Clowney, the much-traveled defensive end and first overall pick in the 2014 NFL Draft by the Houston Texans, to a modest one-year contract. Past Browns teams might have made a player like Clowney the centerpiece of their offseason philosophy, signing him to some lavish contract and hailing him as a savior. The Andrew Barry/Kevin Stefanski Browns grabbed Clowney as an extra piece for a defensive line headlined by Myles Garrett and Sheldon Richardson. Some Browns fans seem to think the team just signed Thor, but the organization itself appears to regard Clowney as just another useful building block.

Building blocks. Big-name veterans signing on the cheap. Realistic Super Bowl expectations. Are we sure these are the real Cleveland Browns?

Few college defenders have ever been as famous — or as highly touted as pro prospects — as Clowney was entering his final season at South Carolina. He recorded 13 sacks and 3 forced fumbles as a sophomore in 2012. He was a Heisman Trophy short-lister. I remember Rex Ryan joking about finding a way to draft Clowney when I covered New York Jets training camp in 2013. The hype was real.

Clowney’s 2013 season proved disappointing, however. He suffered bone spurs in his foot and a muscle strain in his ribs. He recorded just 3 sacks, was invisible for a few games, and sat out others. The media curdled on him. Only at the end of the season was it revealed that Clowney was playing through a sports hernia in addition to his other ailments.

Texans head coach Bill O’Brien and general manager Rick Smith were undaunted by Clowney’s injury-plagued 2013 season. They drafted Clowney first overall in 2014, despite their critical need at quarterback. Of course, the top quarterbacks in the 2014 class were Blake Bortles and Johnny Manziel (plus Teddy Bridgewater and Derek Carr, fine players but dubious choices at the top of the draft), so O’Brien and Smith were onto something, for once.

Unfortunately, Clowney needed hernia surgery, then suffered a training camp concussion, then tore a meniscus. He played just four games as a rookie. Foot, back, and ankle injuries slowed Clowney in 2015. In his first two seasons, he recorded a total of just 4.5 sacks.

Clowney finally broke through in 2016. He earned Pro Bowl berths in three straight seasons. He joined J.J. Watt and Whitney Mercilus on a defense that generally kept the Texans in the playoff picture, despite inconsistency on offense and mounting O’Brien-fueled turmoil within the organization. Even as a Pro Bowler, however, Clowney was always fighting through some knee, elbow, or back ailment, and his sack totals were never impressive.

The Texans went 11-5 in 2018. They appeared to be legit Super Bowl challengers. Clowney received the franchise tag at the start of the offseason, and it looked like O’Brien (now wielding dictatorial control over the organization) wanted to keep his superstar nucleus intact.

But O’Brien was an impatient contract negotiator. Clowney held out of training camp, so O’Brien traded him to the Seahawks for chump change (a third-round pick and a pair of backups) in what’s best described as a fit of pique, because saying an adult had frequent “temper tantrums” is a little mean.

Clowney played well in spurts for the Seahawks in 2019. As usual, he also coped with multiple injuries, this time to his knee, hip, and a core muscle. He also committed 7 neutral zone infractions or offsides penalties, a problem that plagued him with the Texans, and was fined for his helmet-to-helmet hit on Carson Wentz in a Seahawks playoff victory.

The Seahawks were clearly not completely satisfied with Clowney’s performance/availability. Clowney lingered on the 2020 free-agency market. His injury history and February core muscle surgery scared away some suitors in an offseason where COVID prevented in-person physicals, and his performance-to-injuries-and-expected-compensation ratio had clearly caught up to him.

Clowney signed with the Tennessee Titans at the dawn of the season. He ended up having an extra Clowney-like season: 8 solid-enough performances, one season-ending knee injury, and a too-low sack total (zero, to be precise). The disappointing season was especially harmful to the Titans, whose defense recorded just 19 sacks in a season when the team had Super Bowl ambitions.

Clowney and the Browns: Perfect together

History tells us again and again that a team that expects Clowney to spearhead their pass rush is certain to be disappointed.

Clowney is a situational player, not a J.J. Watt. He’s better at collapsing pockets and disrupting running plays than generating sacks. He’s at his best when sliding all around the defensive front, left to right, often as a standup linebacker, sometimes as a blitzer up the gut. Most critically, he needs his snaps and workload managed carefully because he can probably operate an MRI machine by himself at this point.

The Browns don’t expect Clowney to spearhead anything. He’s a likely starter, of course, but he’s still a role player on what is turning into a stacked defensive line.

Myles Garrett is coming off his third straight double-digit sack season. He’ll be the J.J. Watt to Clowney’s, um, Clowney.

Sheldon Richardson has come into his own as an interior disruptor at defensive tackle. Like Clowney, Richardson spent several seasons as a semi-disappointment after the Jets drafted him 13th overall in 2013. Also like Clowney, he looks much better when he is not being compared to his sky-high expectations.

Malik Jackson, another free-agent acquisition, also has a Clowney-like history. The Jacksonville Jaguars overpaid him after he helped the Denver Broncos win Super Bowl 50. The Philadelphia Eagles overpaid him based on a strong 2018 season with the Jaguars. The Browns will pay him $3.5 million to keep blockers away from the others.

Just in case the Browns had not collected enough talented baggage guys on the defensive line, they added Takkarist McKinley in free agency. McKinley never developed after the Atlanta Falcons made him the 26th overall pick in the 2017 NFL Draft. If he can stick as a 30-snap rotation player, he can help reduce Clowney’s workload.

That projects as one of the best defensive lines in the NFL, folks. And it should still be pretty darned good if Clowney turns out to be Ol’ Aches and Pains again for a chunk of the season.

What’s next for Clowney and the Browns

Clowney may be on a “prove-it” deal. He may also merely be a rental. Either way, he’s a low-cost upgrade. The Browns will likely add another edge rusher in the draft, but with Clowney and Takk opposite Garrett, they can wait until later rounds and roll the dice on some project like UAB’s Jordan Smith or Buffalo’s Malcolm Koonce. And if Clowney shines, the Browns have the future cap space to offer a fair-market extension.

The Browns are leaving themselves options and creating multiple paths to the Super Bowl while still acquiring premium talent at bottom-of-the-market prices. You know who else used to do that? The New England Patriots in their glory years.

Clowney will never be the player we thought he would be in 2012. He’ll never live up to his draft status. But the Browns just need him to be himself while staying as healthy as possible. It’s a realistic expectation. And Clowney might just exceed it.

Keep Reading! Stacking the 2021 QB draft class against the greatest in NFL history