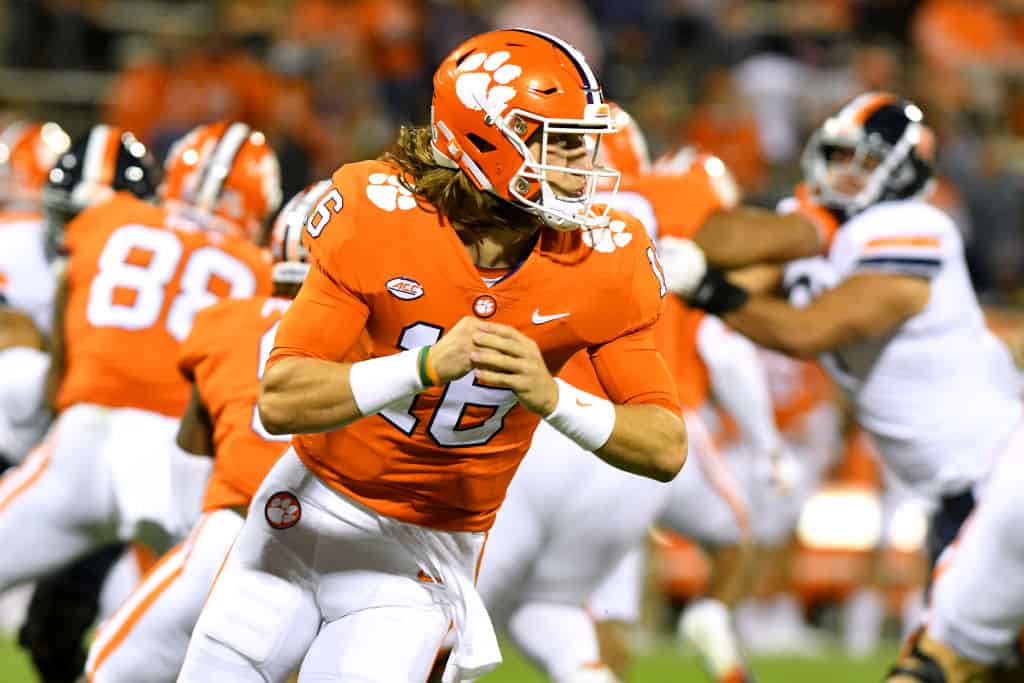 CLEMSON, SC - OCTOBER 03: Clemson Tigers quarterback Trevor Lawrence (16) fakes rolling out with the ball during the game between the Clemson Tigers and the Virginia Cavaliers on October 03, 2020 at Memorial Stadium in Clemson, South Carolina. (Photo by Dannie Walls/Icon Sportswire via Getty Images)

What a wild and wacky NFL season it has been! The schedule has had to be shuffled more than a deck of cards in Vegas. The Pittsburgh Steelers are the class of the AFC — and the NFL — standing as the league’s only undefeated team. On the other side of the coin, a whopping 17 teams sit at or below .500. Seven of those only have one win, making for a tight race for the number one overall pick in the 2021 NFL Draft. With that as the backdrop, it’s time to dive into another first-round NFL mock draft — my first of the year!

Let’s be honest, there’s really no other way we could kick off the first round of our NFL mock draft. The Jets are easily the worst team in the NFL this year, and their problems start at the top, both organizationally and on the field. The Jets seem like they’re headed for a regime change next season and a total clearing of house. What better way to start fresh than with a QB some view as the best prospect since Andrew Luck?

Things didn’t turn out all that great for Luck in Indianapolis, as they were never able to surround him with enough talent until it was too late. That’s going to be a stumbling block for the Jets, too, as they look to rebuild from the ground up. But they’re going to need to start somewhere, and Sam Darnold isn’t it.

It has not been a great year for football fans in the state of New York (technically New Jersey), but at least they have the Bills, right?

The NFL has become a league of offense, and perhaps no team in the league struggles more on that front than the Giants. I’m not sold on Daniel Jones being the guy for Big Blue, and almost went with Justin Fields here, but it feels early both for Fields and for the Giants to give up on Jones. Instead, the pick is the outstanding left tackle from Oregon, Penei Sewell.

The Giants tried to give Jones help up front in last year’s draft, taking Andrew Thomas in the top 5. It hasn’t worked out great so far, as Thomas has struggled to adapt to the NFL level. Adding Sewell into the mix would go a long way towards giving the team multiple high-level tackles and perhaps give Jones a legitimate chance to show whether or not he can be their QB of the future.

While many may look at the Jags roster and assume a quarterback is the way to go in the 2021 NFL Draft, this first-round mock is going the other direction. They need help on defense, and the best pick for them at this spot is the talented cornerback from Alabama, Patrick Surtain II.

Surtain comes from great lineage, as his father was a shutdown corner for the Miami Dolphins for many years. The younger Surtain is a shutdown corner in his own right, leading the vaunted Crimson Tide defense to SEC domination against everyone who wasn’t Joe Burrow last season. Surtain would give Jacksonville a great one-two punch on the outside with C.J. Henderson, one of the few bright spots on the Jags defense this season.

The Atlanta Falcons have been the poster-child in the NFL for giving up huge leads and ending up with heartbreaking losses. They’ve been that since infamously blowing a 28-3 lead to the New England Patriots in the Super Bowl, and the 2020 NFL season has continued that trend. Atlanta has given up multiple-score leads in several games this season, so defense is a logical choice for them in this first-round NFL draft mock, right?

It would be, yes, and I gave a lot of consideration to handing them Florida State defensive tackle Marvin Jones here. Jones would be a great addition to the middle of the Falcons defense. But at the end of the day, offense is king in the NFL. Matt Ryan isn’t going to play forever, and this could be his last season in Atlanta. The Falcons fired Dan Quinn much too late, and whoever comes in may want to start fresh at the league’s most important position.

Fields would give the Falcons a shot in the arm offensively in terms of athleticism at the position. He also gives them a guy who is incredibly accurate and makes great decisions with the ball in his hands. If the Falcons are going to hit the reset button, Fields is the guy to do it with.

The Cincinnati Bengals are part of the logjam of one-win teams near the top of the 2021 NFL Draft standings as of today. That really shouldn’t surprise anyone, as the Bengals are far from a finished product. They took the first steps last year, drafting all-world quarterback Joe Burrow at the top of the 2020 NFL Draft. For his part, Burrow has given the team a pretty good ROI, all things considered. He hasn’t lit the NFL world on fire, but he’s been solid.

The biggest problem in Cincinnati is what’s in front of Burrow. Burrow has a very good running back in Joe Mixon behind him. He has some weapons on the outside to throw to. But he’s been running for his life behind a bad offensive line all season. That needs to change, and in a hurry. Enter Ohio State’s Wyatt Davis.

Much like Sam Darnold in New York, Kirk Cousins “ain’t it” for the Minnesota Vikings. He was brought in to elevate their offense to the next level and make them a contender in the NFC North and the conference overall. Point blank, he hasn’t done that, and he probably never will at this point. However, the problems in Minnesota extend beyond the quarterback position.

With both Lawrence and Fields already off the board, and the top 10 a steep price to pay for a redshirt sophomore from the FCS-level in NDSU’s Trey Lance, the Vikings look to the defense in this first-round NFL Draft mock draft. By adding Dylan Moses from Alabama, the Vikings could drastically improve a defense that competes with the Jaguars in the bottom 5 of most statistical categories.

It’s Tua time in Miami! It may be a bit earlier than some expected, but head coach Brian Flores and the Dolphins have decided it’s time to get their first-round pick on the field. Now that the Dolphins have officially embraced the next phase of their rebuild, the focus has to be on getting pieces around the young QB.

There’s a lot of offensive firepower still on the board here in the seven spot, and a lot of directions Miami could go. Ultimately, I believe they’d choose to further bolster their offensive line and select Creed Humphrey. Humphrey could have been a high pick in last year’s draft had he come out, and he should be one this year.

The offensive line in Miami is improving, but it still has a long way to go. Keeping Tagovailoa upright and not running for his life has to be the primary concern. Taking Humphrey and solidifying the interior of that offensive line does just that.

I don’t think many expected the Dallas Cowboys to be picking in the top 10 when the season started. Coming out of the gates, the Cowboys looked like one of the most high-powered offenses we’ve seen in quite some time. Then the bottom fell out. That’s what losing a top-tier quarterback will do to a team.

It may be easy to overreact to the Prescott injury and project the Cowboys taking a quarterback here. With the contract situation throwing a wrench into things, it would make some amount of sense. But I believe Prescott and the team will come to an agreement, and he’ll be there for years to come, which turns the focus over to the defense.

Dallas needs to find a replacement for Byron Jones, who left in free agency to Miami. They’ve needed safety help for years, but there’s not a difference-maker at the position worthy of a top 10 selection this year. Their best option is Ohio State cornerback Shaun Wade. Wade and Surtain are neck-and-neck for the top cornerback of the class, and for the Cowboys to nab him here is a pretty good consolation prize.

Washington took quite a tumble in the 2021 NFL Draft standings with a somewhat surprising 25-3 victory over their division rivals, the Dallas Cowboys. The win wasn’t enough to knock them out of the top 10 in the draft standings, however, and as the board falls, they still get a guy they would likely covet much higher up in the order.

While the Football Team has an obvious need at quarterback on the offensive side of things, the prospect of getting Penn State linebacker Micah Parsons at the back half of the top 10 should be too enticing for them to pass up. Washington already has one of the best front fours in football. Adding Parsons to the mix would go a long way towards improving a rather suspect linebacker group, and adding to an improving defense.

Quarterback will just have to wait in Washington, which may make some fans uneasy, but Parsons is worth it.

The Justin Herbert era may have gotten an earlier start in Los Angeles than most predicted, but it has been going well so far. Herbert hasn’t been perfect by any stretch, but he’s looked more than capable behind center, especially for a quarterback who wasn’t supposed to be seeing action this early. He’s more than shown why the Chargers took him with a top-10 pick in last year’s draft.

Unfortunately, the Chargers are still the Chargers. There’s not a team in the league who finds more ways to snatch defeat from the jaws of victory. With the exception of Sunday’s win against Jacksonville, every game has been decided by one score. Their four losses have been by a combined 18 points. It seems like it’s the same script every week, and that needs to change for LA to see some success.

Grabbing arguably the most talented interior defender in this year’s class in the first round of this NFL mock goes a long way towards doing that. Marvin Wilson can give the Chargers a great interior complement to Bosa and Ingram on the outside. Wilson can get after the quarterback from the interior, as well as provide great run-stuffing up front. Wilson doesn’t solve all of the problems, but he helps, and the value here is too great to pass up.