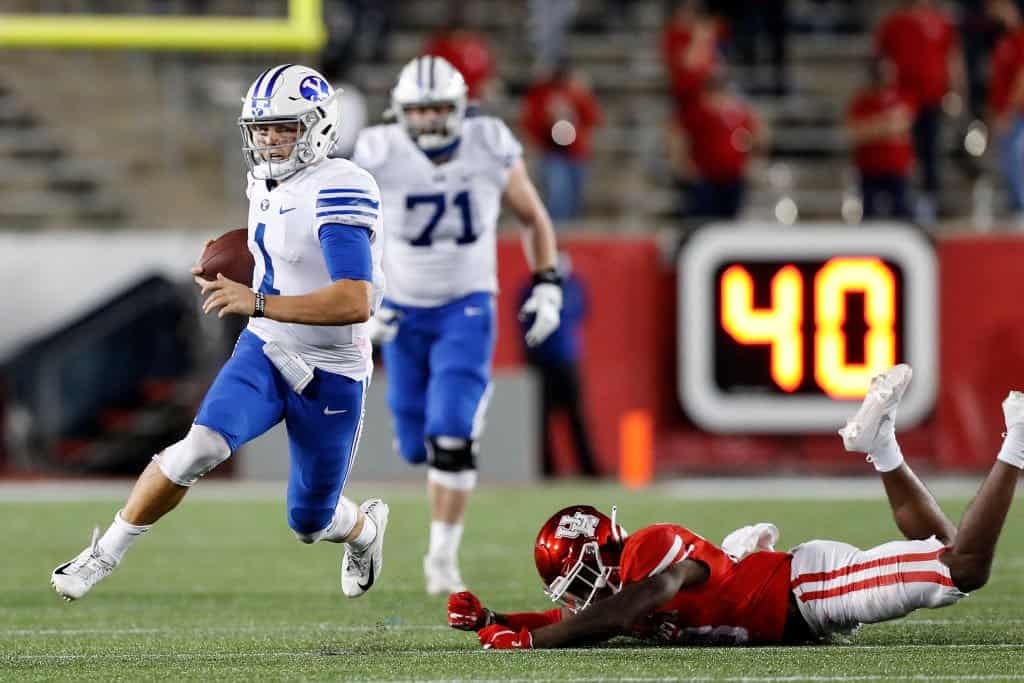 HOUSTON, TEXAS - OCTOBER 16: Zach Wilson #1 of the BYU Cougars runs past Thabo Mwaniki #28 of the Houston Cougars in the second half at TDECU Stadium on October 16, 2020 in Houston, Texas. (Photo by Tim Warner/Getty Images)

Heading into this 2021 First Round NFL Mock Draft, the need to upgrade the Raiders’ interior line is paramount. Not only do they upgrade, but they also get the best DT in the 2021 NFL Draft class.

During the final half of the season, his play elevated him into a first-round selection and showed a glimpse of what he is capable of at the NFL level. At 6’5″ and 310 pounds, Christian Barmore already has the prototypical body type.

For those who might not watch much Tulsa football, let’s go over his stats real quick. Zaven Collins racked up 236 tackles (25 for a loss), 7.5 sacks, 5 interceptions, 3 forced fumbles, and 3 fumble recoveries in three seasons, all while running around with a 6-foot-4 and 260-pound hulking physique.

He has the size to crush someone coming through the hole and the speed to cover in range and space. Collins can play every LB spot and come down as an EDGE. He was arguably the most dynamic defensive playmaker in college football for the 2020 season.

Pairing Collins with Brian Flores is a match made in pigskin heaven. Yes, I know Dolphins fans wanted an RB likely with this pick, but I would instead get Collins and address RB with the 36th overall pick. One of Najee Harris, Javonte Williams, or Travis Etienne will be there, and that is the order I have them ranked.

Jeremiah Owusu-Koramoah is an intriguing player as he plays with a physicality above his size at 6-foot-1, 216 pounds.

Owusu-Koramoah racked up 142 total tackles in the last two years for Notre Dame, including 24.5 for losses, and was the ACC Defensive Player of the Year in 2020. He is fast and can play sideline to sideline and is everything you want out of a modern NFL OLB. If a team falls in love with Owusu-Koramoah, he could go inside the top 10.

An already great defense lands a steal in my 2021 NFL First Round Mock Draft. Now what to do about that pesky quarterback position?

One thing that is certain is WR Allen Robinson is gone in what is a complete failure by the organization to keep one of the NFL’s elite receivers on their team. While it’s hard to find anyone who could fill Robinson’s shoes, Minnesota’s Rashod Bateman can come close.

At 6-foot-2, 210 pounds, Bateman is a nuanced route runner with strong hands and the ability to catch the critical 50/50 ball. He only played in five games in 2020 before opting out, but his 2019 season is what sticks out. While lined up with Tyler Johnson, Bateman hauled in 60 receptions for 1,219 yards and 11 touchdowns. Adding Bateman to the growing confidence of Darnell Mooney, whoever is playing quarterback for the Bears will have options.

Chris Ballard has an interesting choice ahead of him in 2021. Who will be under center for the Colts in 2021, and who will play at OT following Anthony Castonzo’s retirement? He can only choose one in the first round.

If Stafford does not end up in San Francisco, Indianapolis would be my betting favorite. Darrisaw is a Week 1 starter who has the skills to protect the blindside while the speed and technique to reach the second level in run blocking. No one has been a better drafter than Ballard in recent years, and he knocks it out of the park with this pick in my 2021 NFL Mock Draft of the first round.

Even with how good Mike Vrabel is as a defensive-minded coach, the Titans still struggled to get pressure. Joseph Ossai can help fix that problem.

He has the speed, length, and motor to make life difficult for opposing offensive tackles. Given his athleticism, Ossai can also play off the ball, giving Vrabel the freedom to be creative with blitz packages.

Part two of the Watson trade is now on the clock and after adding help on the defense, whoever is coaching the Texans bolsters the interior OL with one of the rising names of the 2021 NFL Draft class.

Vera-Tucker committed to USC as a left tackle, played right guard as a sophomore, left guard in 2019, then went to left tackle for his final season in college. He has all the versatility one could ever want in and is the top interior offensive lineman in this class due to his work at multiple positions. Having him last this long in the first round of my 2021 NFL Mock Draft might be a bit generous.

It sounds like Ben Roethlisberger might be back, but as of right now, we don’t know for sure, and they need a QB of the future. However, this team’s most significant need is the issue that was OT this season and replacing left tackle Alejandro Villanueva who did not have a good season.

Enter road-paver Alex Leatherwood from Alabama. If you don’t get the skill players, get the guy who makes their lives easier. Leatherwood was a two-year starter at Alabama and has tackle/guard versatility. He improved from 2019 to 2020 and would be a Day 1 starter for the Steelers.

When you get a franchise QB, there are two choices — get him weapons or protect him. In this 2021 NFL Mock Draft, Urban Meyer chooses the latter and doesn’t want to run the risk of what happened to Joe Burrow happen to Trevor Lawrence.

Cosmi has all the tools and was arguably the best player on the Texas squad for the past few seasons despite Sam Ehlinger proclaiming the team was “back.” At 6-foot-7, 305 pounds, Cosmi has some of the longest arms in this whole class. He is not the quickest off the ball but has more than enough quickness to keep a defender in check and scrape up to the next level. He is raw, and that makes him an incredible prospect.

His hand fighting is top-end and can play both off the ball and as an EDGE. Cleveland would like him to be able 10-15 pounds heavier, but refinement in his craft will more than make up for that.

Without question, the Ravens need to address the receiver position in 2021. Marquise Brown isn’t a WR1. Given the depth of the position in this class, I think they can wait or would have hit the position in free agency already.

The other position is EDGE, where they have four players hitting free agency. Initially at UCLA, ankle, wrist, and concussion issues limited his time on the field before transferring to Miami. Once with Miami, Phillips brought a rare mix of speed, power, length and could stop the pass and rushing game. Yes, you would like to see a larger sample size, but he can play in any defense Don Martindale can draw up given his versatility.

Sean Payton seems determined to make Taysom Hill the starter next season. If it lasts all of 2021 remains to be seen but following the likely retirement of Drew Brees, other options are limited.

What the Saints do in this 2021 First Round NFL Mock Draft is something they never did for Brees — have a legitimate WR2. Terrace Marshall Jr. brings terrific size (6-foot-3), physicality, hands, ball skills, run after catch ability, route-running skills, and overall technical refinement. In 2020, Marshall averaged more than 100 receiving yards per game and hauled in double-digit touchdown receptions for the second consecutive season.

Packers fans, rejoice, for I have brought you help alongside Davante Adams. Oh, Rondale Moore is more than just help.

Moore is arguably the draft’s most electric prospects, right along with Jaylen Waddle. Please do yourself a favor and watch him play against Ohio State in 2018 and come back to me when you are finished. Not only did he single-handedly beat an (at the time) unbeaten Ohio State with 12 receptions for 170 yards and 2 touchdowns, he did it as a true freshman.

There is no denying that Moore is a bit of a wild card. He played in seven games combined over the last two seasons due to injuries and then opting out of the Big Ten season. I understand there are size concerns (5-foot-9, 180 pounds), but don’t let that get in the way of a game-breaker who plays like a dog on the field and can burn angles with well-documented 4.33 speed. He is the perfect fit for a creative offensive mind and signal-caller. Ring any bells?

Thank you for coming to my Ted Talk.

The Bills need to find a solution to Matt Milano, and Nick Bolton would side in and fill the void in the linebacker unit.

He can cover side to side and can fill against the run even if slightly undersized. Bolton was an All-SEC linebacker, registering 217 tackles (135 solo), 4 sacks, and 13 deflected passes.

Pairing Jalen Mayfield with Tristan Wirfs makes a lot of sense. Mayfield can either play tackle or guard and with the Buccaneers in a one-year window, keeping Brady upright is the priority.

The question mark on his résumé is he only has 15 starts at Michigan. However, it was a baptism by fire in the Big Ten as he faced the best of the best including Yetur Gross-Matos, Chase Young, and Julian Okwara. Mayfield has the skill set to protect his fellow Michigan alumni for at least one more season.

Although I did this in my 2021 First Round NFL Mock Draft, 31 other GMs have the job to make sure this does not happen under any circumstance. Patrick Mahomes and Andy Reid do not need more incendiary, quick wide receivers who run ridiculous routes off the line. I don’t want to speak this into existence, but here I am doing just that.

I get the pleasure of this being my full-time job. Don’t worry, I know, that probably just shocked and appalled most of you. What that means is I get to watch a lot of film. I love this time of year because I can dive in to prospects.

Kadarius Toney has one of the absolute favorite plays of this class, and it is a whip route he runs against Kentucky. There is another where he runs a slant against South Carolina, and the move he puts on the linebacker before his beak fooled him enough he should have given up his scholarship. As much as I want to see the fantasy points rack up, I can’t in good conscience ask for what I did in this 2021 NFL First Round Mock Draft come true.