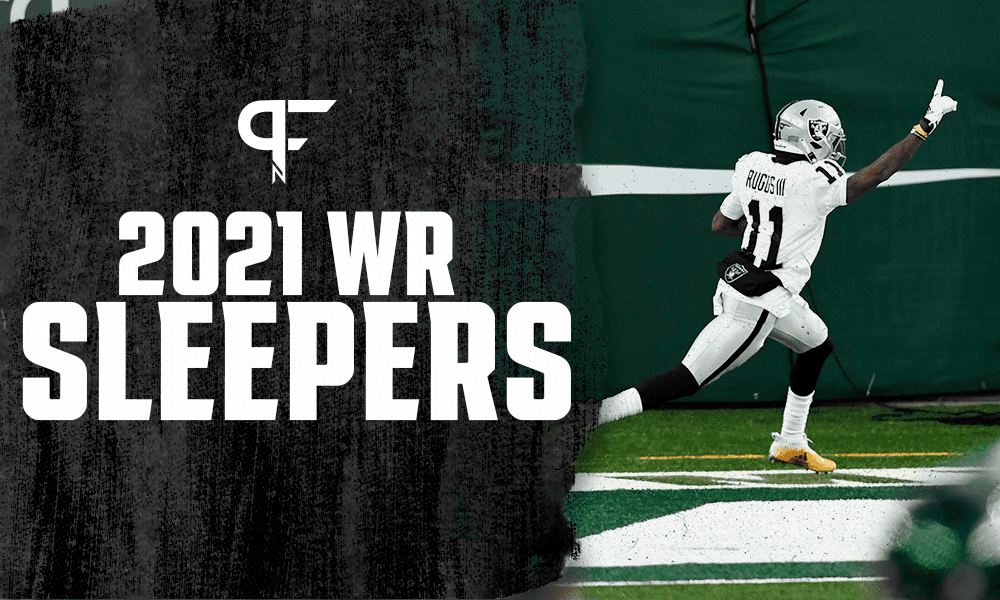 Finding WR sleepers is of high priority for fantasy football managers heading into 2021. So, which WRs should managers have their eyes on?

Which wide receivers from the AFC stand out as potential sleepers in 2021?

We do remember that Henry Ruggs was the first WR selected in the 2020 NFL Draft, right? Because just a year later, it seems like Ruggs is being looked at as an afterthought.

Now, I understand that his 2020 season was a forgettable one for fantasy managers. However, Ruggs’ ADP for 2021 is a prime example of expecting results right away from rookies, which is typically not the case. Yes, Justin Jefferson and Brandon Aiyuk had terrific rookie seasons, but it doesn’t necessarily mean that the Henry Ruggses and Jerry Jeudys of the world are immediately declared busts.

No one is saying that Ruggs is going to suddenly overtake Darren Waller in target shares for 2021. But that doesn’t mean Ruggs can’t take a big step forward in his sophomore season. The additions of John Brown and Willie Snead should not scare fantasy managers off from taking a chance on Ruggs.

Landing a potential WR1 on an offense in the 13th round is exceptional value, and why Ruggs deserves recognition as a WR sleeper for 2021.

Gabriel Davis is currently going off fantasy boards as the WR69, and he could begin falling even further with the latest news that Emmanuel Sanders is emerging as the WR2 in Buffalo’s offense. If that’s the case, Davis becomes even more of a bargain.

In truth, there’s enough production to go around in the Bills’ offense — unless you play running back. While Sanders could overtake the vacated Brown role, it doesn’t exactly spell doom for Davis’ fantasy outlook. At 34 years old, Sanders is on the back end of his career and it’s beginning to show. He played 70% or more snaps in just five of 14 games played last year compared to 12 such games in 2019.

Meanwhile, Davis saw more snaps and targets in the latter half of the 2020 NFL season. Although it’s partly due to Brown’s injury, it was clear that Davis began getting acclimated and comfortable in the offense. He finished the year as the WR56, with an average of 8.6 fantasy points per game in PPR formats. I can only see Davis going up from here.

Getting Davis at the end of fantasy drafts could be the steal of 2021. I’d expect Davis’ ADP to fall even further from now until the start of the season unless something drastic like Cole Beasley retiring occurs before then. For someone who is likely to put WR4 numbers or better on a week-to-week basis, Davis absolutely deserves to be on this list of WR sleepers in 2021.

Which wide receivers from the NFC stand out as potential sleepers in 2021?

Admittedly, of the trio of Dallas Cowboys wide receivers, my preference would be to have CeeDee Lamb on my fantasy roster. However, landing Michael Gallup later in drafts is not a bad consolation prize. There was a ton of buzz surrounding Gallup heading into last season, but that is not the case going into 2021.

Lamb and Amari Cooper are the clear top options for Dak Prescott in the Cowboys’ passing attack. Nevertheless, similar to the aforementioned Buffalo offense, there’s plenty to go around in Dallas. Bottom line — you’re going to want to have some affiliation with Dallas’ offense on your fantasy team heading into 2021. Gallup may be the best value of the bunch.

Even with Prescott healthy, Gallup struggled to start the year in 2020. Through the first five games, he averaged just 5.6 targets, 3.4 receptions, and 69.6 receiving yards, with just 1 total touchdown in that span. Although a large chunk of his production came in Week 3 against Seattle, Gallup managed to average 11.56 PPR points over that span and was the WR33 when Prescott got hurt.

The big takeaway from Gallup’s stats is the receiving yards. He won’t receive the targets that Lamb or Cooper (or even Ezekiel Elliott) will receive. Still, his ability as a deep threat will result in solid fantasy production more often than not. This may give the impression that Gallup is more of a boom-or-bust play, but I believe he can consistently produce high-end WR3 numbers throughout the course of the season.

The ADP of Darnell Mooney baffles me. He finished last season as the WR50, and that was with Nick Foles and Mitchell Trubisky at quarterback. Now, he gets an upgrade with Andy Dalton, and it’s only a matter of time until Justin Fields takes over — regardless of what head coach Matt Nagy may say.

It can only go up from here for Mooney, and yet, he continues to slide down fantasy draft boards. I know that Chicago’s offense does not scream fantasy production, but there’s not much competition for targets for Mooney behind Allen Robinson. Cole Kmet should have every opportunity to break out in 2021, but that shouldn’t leave fantasy managers fading Mooney.

In 2020, Mooney totaled 61 receptions on 98 targets for 631 yards and 4 touchdowns. I highly expect this offense to be better in 2021, and he should get a bump as a result. Mooney could easily see 100+ targets this year, and I’d anticipate more touchdowns for him as well.

The case for Mooney as a WR sleeper in 2021 is clear. Why he’s being slept on, however, remains in question. I expect to have several shares of Mooney heading into the season — I’d gladly take him over guys like Marquise Brown or Corey Davis, to name a few.

Going just behind Mooney in fantasy drafts is Russell Gage. Ironically, Gage went into last season as a WR sleeper — and he delivered. He had 72 receptions on 109 targets for 786 yards and 4 touchdowns. Furthermore, he averaged 11.3 fantasy ppg to finish the year as the WR37.

Granted, Julio Jones did miss seven games last year, but now that Jones is in Tennessee, the opportunity is there for Gage to take the next step. Yes, the Falcons did draft the monster among men, Kyle Pitts, with the fourth overall pick in the 2021 NFL Draft. Pitts will see a heavy dose of targets as a rookie and be the No. 2 option in Atlanta’s offense behind Calvin Ridley. It’s a mere certainty at this point.

However, this is still a high-powered offense, and there’s room for Gage to consistently produce from week to week. I expect Gage’s numbers to rise — but even if he maintains his averages from a year ago — that’s pretty good for someone going off boards as the WR58.

Surely, I thought Gage’s ADP would rise following the Jones trade. Yet, it seems the presence of Pitts has fantasy managers wary of taking Gage any earlier. At any rate, Matt Ryan has averaged 616.7 passing attempts over the past three seasons. As the third option, Gage should again see 100+ targets, making him a terrific value in the back of the 12th round — and one of our top WR sleepers for fantasy football in 2021.