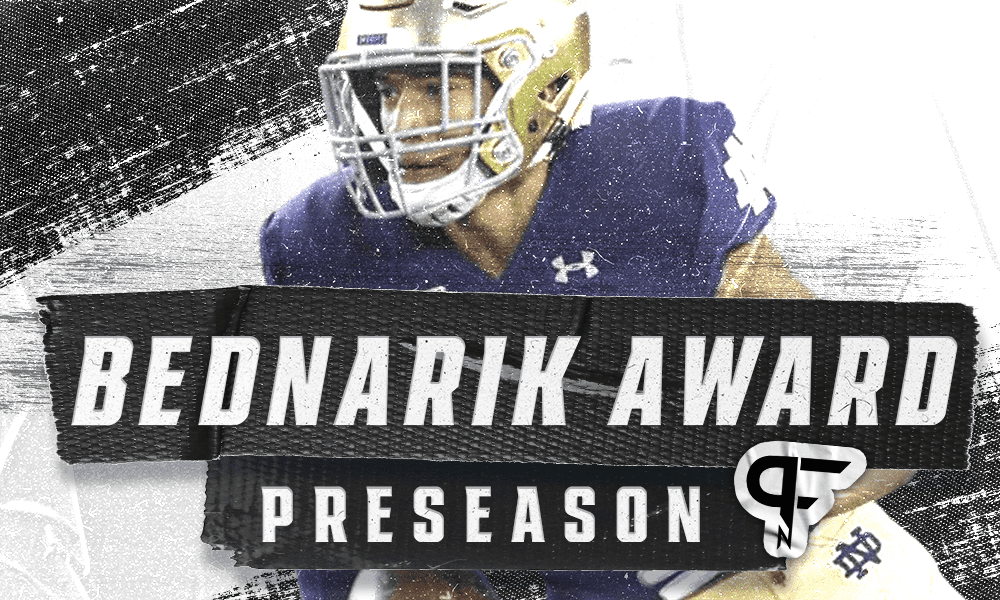 By Cam Mellor
July 19, 2021
What's in this article? Click to show
2021 Preseason Bednarik Award Watch List
Who is the Bednarik Award named after?
Want more 2022 NFL Draft prospect news? Want to do your own mock draft?

The offseason reaches peak levels of excitement when the days of July dwindle down, not just because the season is around the corner, but because the Chuck Bednarik Award watch list comes out. Giving fans a plethora of names to be mindful of as the season approaches, the award itself is given to the nation’s best defensive player in college football.

Past winners are an incredible mix of current Hall of Famers, soon-to-be Hall of Famers, and others who are likely on their way. It is the nation’s most prestigious award for the defensive side of the ball. It’s also incredibly indicative of future NFL success with such names as Chase Young, Minkah Fitzpatrick, Aaron Donald, Patrick Peterson, and Ndamukong Suh as past winners.

Who is the Bednarik Award named after?

The Bednarik Award is given annually to the best defensive player of the year, annually presented by the Maxwell Football Club. It is, of course, named after former No. 1 overall pick in 1949 Chuck Bednarik. A two-time consensus All-American and Maxwell Award winner, Bednarik had an illustrious collegiate career prior to a dominant professional career.

The first player drafted in 1949, Bednarik was selected by the Philadelphia Eagles after he played both center and linebacker for the University of Pennsylvania. Just 20 years after his collegiate days were over, Bednarik was voted by a panel of writers, coaches, and Hall of Famers as the ‘greatest center of all time.’

Bednarik had just as great of a professional career as he was the last NFL player in history to play on both sides of the ball full-time. The award was established in 1995 and is voted on by members of the Maxwell Football Club, NCAA head coaches, sportswriters, and sportscasters around the country. It is given out during the Home Depot College Football Awards Show after the season.

Keep Reading! 2022 NFL Mock Draft: WRs dominate back half of Round 1

Want more 2022 NFL Draft prospect news? Want to do your own mock draft?