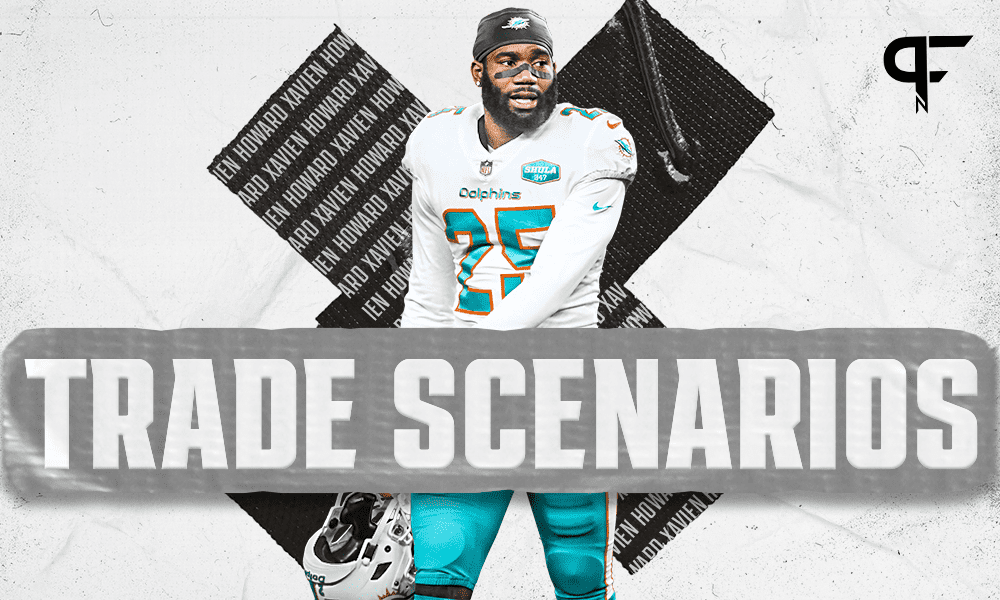 We have already seen plenty of big trades this offseason, including NFL stars like Julio Jones and Matthew Stafford. The rumor mill never sleeps, though, as there is yet another elite athlete reportedly unhappy in his current situation. With this in mind, will Miami Dolphins cornerback Xavien Howard force a trade this offseason? If so, what are some potential trade scenarios and destinations for Howard?

Are the Dolphins actively trying to trade Xavien Howard?

ESPN’s Jeremy Fowler detailed Howard’s frustration with his contract, “Miami doesn’t want to deal him, but it’s the worst-kept secret in the league that Howard is not happy with his contract.”

Currently, Howard is due $2 million less than teammate Byron Jones, whose deal is worth $14 million in guarantees in 2021. However, Howard’s $12 million is of the non-guaranteed variety. That is a far cry from what he is worth coming off a Defensive Player of the Year-caliber 10-interception campaign.

Sources tell PFN that, while there’s only a slim chance of Miami trading Howard, things could get uncomfortable for Miami if Howard’s agent starts pushing the issue. It will be very telling if Howard does not show up for next week’s mandatory minicamp.

Miami has an out in his contract after this season, but Howard wants an adjusted contract this summer. If the Dolphins are unwilling, it would not be surprising for Howard to demand a trade and force their hand. There were rumors of the Cowboys being interested in the star corner earlier this offseason, but after selecting three cornerbacks in the 2021 NFL Draft, they are now an unlikely destination.

If Miami deals Howard, who are some teams that are or should be interested?

A trade for Howard would likely rival the value the Dolphins received from the Houston Texans in return for OT Laremy Tunsil in 2019. As such, it would take a desperate team with a major hole at cornerback for a trade to be completed. Insert the Arizona Cardinals.

Edge rusher Chandler Jones is entering a contract year. Would the Dolphins entertain a Jones for Howard deal? Arizona would likely need to include some draft picks, but with J.J. Watt, Zaven Collins, and Isaiah Simmons bolstering their front seven, they can focus on revamping a poor secondary.

As for Miami, head coach Brian Flores and Jones were together in New England when Flores was an assistant. Not only would Flores optimize Jones’ usage, but the Dolphins need an elite pass rusher opposite rookie Jaelan Phillips.

If Miami dealt Howard, they would presumably want him out of the AFC, let alone the division. Still, would Stephon Gilmore and draft capital be enough to sway their thought process?

Like Jones, Gilmore is entering the final year of his current contract, and the Patriots are unlikely to re-sign him. Losing one All-Pro corner for another is not bad at all. Yes, Gilmore is three years older and heading into the wrong side of 30, but Howard forcing the Dolphins’ hand lessens their leverage in trade negotiations, so this is far from a worst-case scenario.

The Falcons just collected second and fourth-round picks from the Titans in exchange for Julio Jones. Thus, they have the draft capital to make a trade happen.

They are desperate, have a need at the position, and own the requisite trade pieces. So why isn’t this scenario probable?

Atlanta, as of this moment, does not have the cap space to offer Howard the contract he wants and deserves. Still, we have seen how teams can manipulate the salary cap and move players to make space.

GM Chris Grier loves himself some draft picks, and his recent track record proves he knows how to use them.

According to Over the Cap, the Saints do not own over $8 million in cap space until 2023. And while they have been the best at working the cap, the magic will eventually end sooner rather than later. Regardless, Marshon Lattimore needs a running mate in the cornerback room, especially if New Orleans wants to compete with a combination of Jameis Winston and Taysom Hill under center.

In the last trade scenario on the list, we have the Minnesota Vikings. Outside of second-year CB Cameron Dantzler and the aging Patrick Peterson, the Vikings’ cornerback room is not much better than last season.

Making a splash move for Howard is exactly what the doctor ordered. Mike Zimmer is one of the best defensive minds in football and would no doubt enjoy having Howard roaming his secondary.

After opting out in 2020, Danielle Hunter will be making roughly the same amount as Howard in 2021. Looking for a new deal, both players would get their chance to prove their worth in fresh environments built for them to succeed.