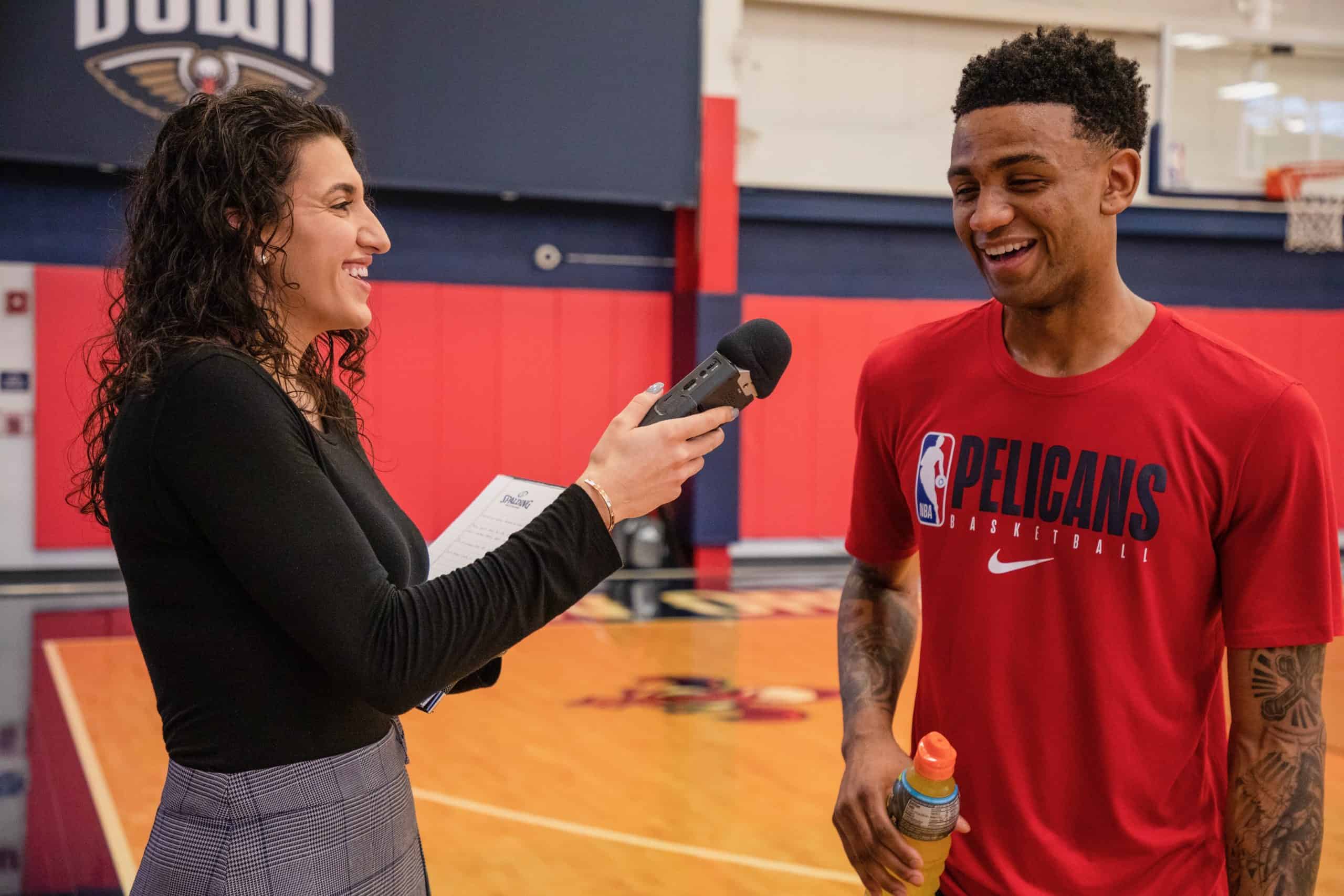 By Crissy Froyd
December 10, 2020
What's in this article? Click to show
Caroline Gonzalez and the grind of working in sports
Stepping in front of the camera
Women in Sports | Growing into the role

Sports journalism is a grind, and it’s something you either learn to embrace or falter because of how taxing it can be. In today’s industry, the ability to “wear multiple hats” helps anyone’s chances of success, and the work ethic that comes with being able to do all of those things is something to be valued. Caroline Gonzalez, who currently works for the New Orleans Saints, New Orleans Pelicans, and WDSU, is a person who embodies what all of that can do perfectly. She sits down with PFN’s Crissy Froyd to discuss her career path in our most recent edition of Women in Sports.

Caroline Gonzalez and the grind of working in sports

Currently working from home, Gonzalez juggles a host of responsibilities in essentially three different jobs. She does the pregame and the postgame show for the Saints on their digital platforms, helps to produce the podcast and hosts it three times per week, and plays a role in virtual events in the midst of the current global situation.

That sounds like a lot in itself, but it’s not all that’s on the list for Gonzalez.

Women In Sports: Kennedi Landry details breaking into the industry during COVID-19

For the Pelicans, she does their sideline and radio reporting and is sometimes the studio host for away games. Production, podcasting, and virtual events are within her scope on the Pelicans’ side as well. At WDSU, she works between two and three days per week on relevant content surrounding the two teams she works with.

Gonzalez describes her work during the pandemic as a “learning experience,” but says she’s had a lot of fun and has found that in some ways, it allows her to do even more than she would if she were commuting from place to place in a normal world.

It’s been odd for sports reporters to not be able to be in their buildings, though, and the overall atmosphere is just different.

“The energy has been zapped. It’s like that feeling is no longer there,” she said.

Tailgating and the general gameday atmosphere that both LSU and the Saints are famously known for has completely changed with reduced capacity or no fans in the stands.

Stepping in front of the camera

Gonzalez says that last year was her first real chance to be on-camera full-time and that the coaches, players, and staff got to know her well over that time period. She says she feels she’s built a solid foundation for those relationships but that in certain ways, it’s hard to carry out stories during the year. With everything being done virtually, it’s more difficult to get the type of content that in-person one-on-one interviews, or going into the locker room, will give you.

Gonzalez didn’t originally have a vision for a “dream job” in sports. She says she got the idea from a speaker at a career class.

“I thought to myself, I can do that,” she said. “I speak well and know sports, let’s give it a shot. So, going to Loyola, I played basketball there.”

“I was doing play-by-play and color for our volleyball games,” she said. “No one was listening except for, you know, Sally’s mom in the middle of Tennessee. But it gave me an opportunity to grow on a platform where it didn’t necessarily matter if I messed up. I could just kind of try it out and see how I felt.”

She said the most difficult part was playing the game while also having to do play-by-play for the men’s basketball games. So, after her own basketball games, she would have to run over and go call those games as well.

The project that started it all

In her senior year, she got an assignment from a teacher in a capstone class.

“It was kind of just a talk to someone, have them look at your portfolio and give you feedback type of thing,” she said.

Related | Women In Sports: Margaux Gill talks about her rise in sports

She said that around that time period, she met with someone who was affiliated with the Times-Picayune, who is now the Vice President of Digital Media for the Pelicans. What started as a simple conversation over coffee quickly turned into volunteer work in 2017 and helped Gonzalez’s career evolve into what it is today.

She started by doing a lot of things behind-the-scenes and helping maintain the website. She says she spent a lot of time in the press room with the reporters, continuing to learn and ask questions, going out of her way to prepare for games the same way as if she were already in the role she is now.

It wasn’t until four months ago that he told me, “Yeah, your video stuff wasn’t very good, but once I got to know you and your personality, that’s what sold me,” she said. “I thought it was hilarious because that stuff was terrible; I was awful on camera.”

Women in Sports | Growing into the role

Gonzalez says that she has learned to build confidence in herself as a professional in the industry over time and that she is her own worst critic.

“Something I feel I have learned a lot about is taking up that space and having the confidence to know that I do belong here and that I’m going to work hard enough to prove myself and prove to myself that I belong here. I think my biggest enemy, honestly, has been myself. I don’t give myself the credit that I deserve, and I think that’s one part great and one part terrible because I’m constantly being down on myself and being too hard on myself, but that also pushes me to be better sometimes.”

Sports journalism can be a rough landscape for women, but Gonzalez says she doesn’t feel like she’s been placed at a large disadvantage as a female, something she believes her background in basketball contributes to.

“I do not, but I understand people who have,” she said. “As an athlete; I played basketball. So I feel like I’ve gotten more respect than other women in our industry because I have that background. Whereas when some people don’t have that background, some people may unfairly see them as not as professional or less than. I think it definitely exists, and I wish it didn’t, and I hope that through articles and interviews like this, that it changes. I do think it’s slowly changing, and I’m optimistic about that.”