Women In Sports: Margaux Gill talks about her rise in sports

Margaux Gill, who works in athlete marketing with OpenDorse, spent some time with PFN to talk about her rise as a woman in sports.

The year 2020 has taught us a lot about pushing for change in several areas across various industries, including the sports journalism industry. One thing that’s been brought to light specifically is the far too typical unequal treatment and general view of women in sports — an issue Pro Football Network has prioritized pushing for changes in.

Each week, we’ll be featuring a woman in sports sharing her story of how she made it into the industry and what a typical day in her current job looks like. This week, we spent some time catching up with Margaux Gill, who previously worked for OpenDorse and now works in athlete marketing.

When did you first realize you were interested in a career in sports?

Margaux Gill: I’ve always known I wanted to work in sports — and, more specifically, work with athletes. My dad was a college football coach, so I grew up around them and have always been able to relate to them in a unique way. As we’ve seen a lot lately, athletes bring a lot of value to our society, and I desire to bring value to them so they can maximize that influence. This has manifested itself in different ways throughout my career, but that’s how I see my purpose.

Q: What can be said about taking a more untraditional path to get to where you want to be in one’s career?

MG: Oh, man. First, I don’t necessarily think there is a traditional path for a sports career. It’s not an easy industry to get into, so everyone’s route is different. Mine certainly has taken a lot of pivots — but that’s a whole long story in and of itself.

I’m currently not doing what I originally thought I wanted to do, but I’m so thankful for each “no” (there has been a lot) and “yes” along my journey that has led me to where I am now. Each step on my path has taught me a skill, introduced me to someone, and/or provided a priceless memory that has influenced who I am in my career.

So, don’t worry about following the “traditional” path or being the next *insert whoever you look up to*. Know yourself and what you have to offer. Focus on becoming the most well-rounded individual you can be and make the decisions that make sense for you and your circumstances. 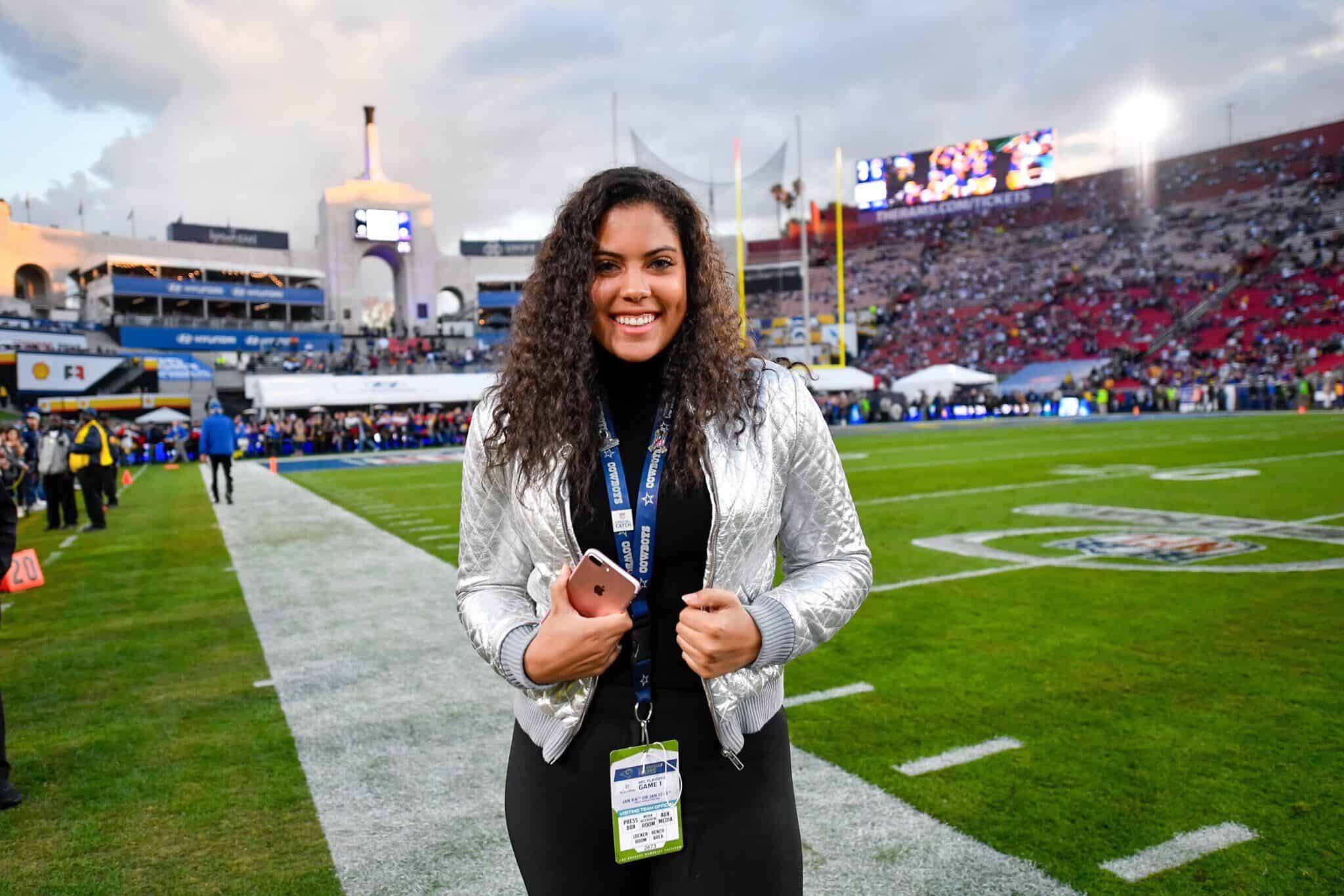 Q: What hardships have you faced as a woman in sports?

MG: Being a woman in sports can be difficult, and being a black (or minority) woman in sports adds another layer. As a woman, there is the daily struggle of being your authentic self while also knowing that everything — from your clothes and makeup to a friendship with an athlete to your sports knowledge and social media posts — will be the source of criticism and gossip. It’s unfair, and it’s exhausting.

As a black woman, I know I have an extra set of rules. I mean this both literally and systematically. I’ve been reprimanded and suspended for things my white women coworkers were allowed to do. And I’ve lost jobs to white women who had no professional experience.

There’s a saying most black people know – you have to be twice as good to get half as far.

So far, in my career, that feels very true. I’m oftentimes the only black woman at work and occasionally the only black person. Quite honestly, it can be draining. But even with all that, I also wouldn’t trade working in sports for anything. I know it’s where I’m meant to be, and I hope my presence encourages other women to feel like they can make it in this industry.

Q: What advice do you have to up and comers?

MG: If you don’t get opportunities, create them! With the influence of digital today, this has never been easier. I did this in college, and it led to real opportunities.

Don’t be scared to pivot! I touched on this, but it’s okay to change direction because there is value in each opportunity. Who knows… you may be like me and find a new career path that wasn’t on your radar before.

Make your relationships in the industry a priority! There are so many reasons for this. First, friends. There are many incredible people, and you’d be missing out if you don’t get to know them beyond work. Second, jobs. They can connect you, recommend you, or sometimes directly hire you. Third, mental health. It helps to talk to people who understand the hardships you go through.

Don’t let others dim your light! When first starting, people will try to put you in a box, and people will try to minimize you. Ignore the haters — if you’re doing your job well, there will be many. And please don’t stay in a situation that doesn’t serve you any longer than you need to.

Q: What does a typical day look like for you in your current position at OpenDorse?

MG: This is an exciting time for me because I’ve transitioned to a new career. It’s not a secret, but I haven’t really talked about it publicly. Aligning with my purpose of bringing value to athletes, I am now an athlete marketing rep. The experience I’ve gained and the relationships I’ve built throughout my career have set me up for this moment.

I’ll be working with Beyond Athlete Management’s NFL and NBA clients. The agency side of things is new to me, so I’m still learning the business a bit. Ultimately, I’ll be engaging with potential or current sponsors for the athletes I represent while helping them build their brands individually.

We have a projected first-round NBA draft prospect, which means a lot of the focus is on him right now. So, it’s a new challenge, and I’m excited about the infinite potential. However, I do still love storytelling and interviewing, so I’ll probably eventually restart my podcast. I had some big interviews planned for this spring, but we know everything got derailed, so it’s indefinitely postponed.

To end things, I can’t emphasize enough to be open to any opportunity and make sure you enjoy the journey. You never know where your career will take you, but one thing is clear – women belong in sports.

Be sure to check in here at Pro Football Network each week as we’ll be featuring a woman in the sports industry. We’ll share her story of how she made it into the industry and what a typical day in the life in her current job looks like.