Women In Sports: Kennedi Landry details breaking into the industry during COVID-19

The year 2020 has taught us a lot about pushing for change in several areas across various industries, including the sports journalism industry. One thing that’s been brought to light specifically is the far too typical unequal treatment and general view of women in sports — an issue Pro Football Network has prioritized pushing for changes in.

Each week, we’ll be featuring a woman in sports sharing her story of how she made it into the industry and what a typical day in her current job looks like. This week, we caught up with Kennedi Landry, who was the sports editor at The Reveille (LSU’s student newspaper) and now is a reporter/producer at MLB.com.

In her four years at LSU, Landry’s presence in the press box made a statement in itself for women in sports, considering she was the only female beat reporter for LSU football for the better part of that time as a college student.

How did you get into sports journalism, and what drives you to stay in it?

Kennedi Landry: I think getting into sports journalism was pretty simple for me — I was good at writing, and I liked sports. This was really the only profession where I could combine the two and really enjoy myself throughout college and into my first year in the ‘real world’ as well. I think my reason for getting into it is the same reason I stay in it – it’s just something I’m really good at doing on a daily basis.

It’s cheesy, but most of the time, it doesn’t even feel like work. Being able to be in stadiums and on fields or courts every day for the rest of my professional life really does appeal to me, and there’s definitely nothing I would rather be doing than this.

What was it like covering something outside of sports, what did you learn from it, and was it ever something you could have seen yourself doing before?

KL: During the months after graduation and in the middle of the coronavirus pandemic, I covered higher education and COVID-19’s effect on it throughout the Baton Rouge area, including LSU, Southern, and BRCC. It was definitely something I never saw myself doing and honestly actively avoided doing for most of my college journalism career.

I think during that time, I really just learned and practiced more of the basic fundamentals of journalism. As much as journalism can be the same across the board, it’s so, so different between sports and news. It really did just help me to keep up my writing practice and to learn more on the reporting side of things and building sources and things like that.

I would not have said this before having to do it myself, but I think all sports journalists should try their hand at news, even for just a short period of time, just as a learning experience. You really never know when you’ll be in the same situation as me. I mean, we probably won’t have another international pandemic, but still. 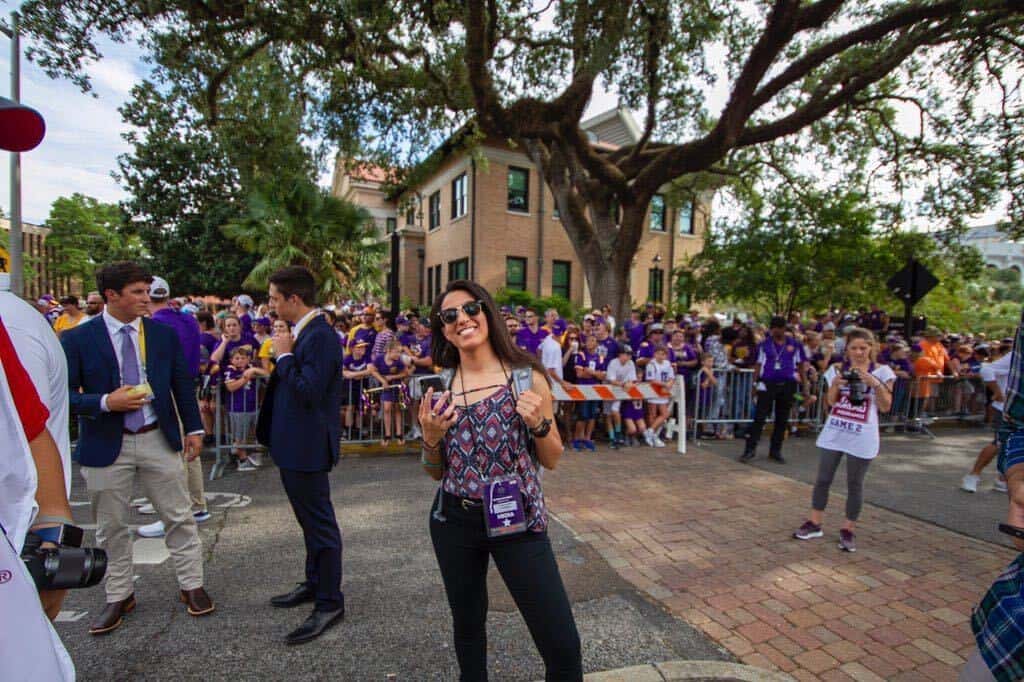 How difficult was it to enter the job market during a pandemic, and what advice do you have for others in the same boat?

KL: I think finding a job in the coronavirus world is one of the hardest things I’ve had to deal with in my short lifetime, and I’m obviously not the only one that had to go through this either. I applied for pretty much every sports job that came across my feed, even one in Alaska.

I think one of the most important things you can do during an unemployment period is to continue writing and practicing as much as you can. Make sure you keep up that kind of muscle memory, and when you do get a job, you’re not floundering during your first assignment.

Another super important thing is to continue networking, whether that’s on social media or through organizations like AWSM, NABJ, NAHJ, AAJA, etc. Any way you can connect with people in this industry, especially those that look like you and even others that don’t, that’s another person who can be on your side in the future.

How can we help others gain perspective on being a minority woman in sports, and how do you think it’s affected you both in the industry and in the world?

KL: One of the most important things men and white women can do to help women of color — not just in sports, but in life — is to listen. Women of color, especially black women, experience different hardships than any other minority group, and listening to what they have to say and helping them through microaggressions, double standards, and unconscious biases in the workplace is so important to moving forward in this country.

Personally, as someone who has always been one of the few women of color in any given room, it has taken me a while to see that as a plus in my life. Even when things aren’t intentional, there are always those unconscious biases that I mentioned earlier, and I have always tried to surround myself with people who don’t just see me as my race or gender but see it as part of me and who I am as a whole.