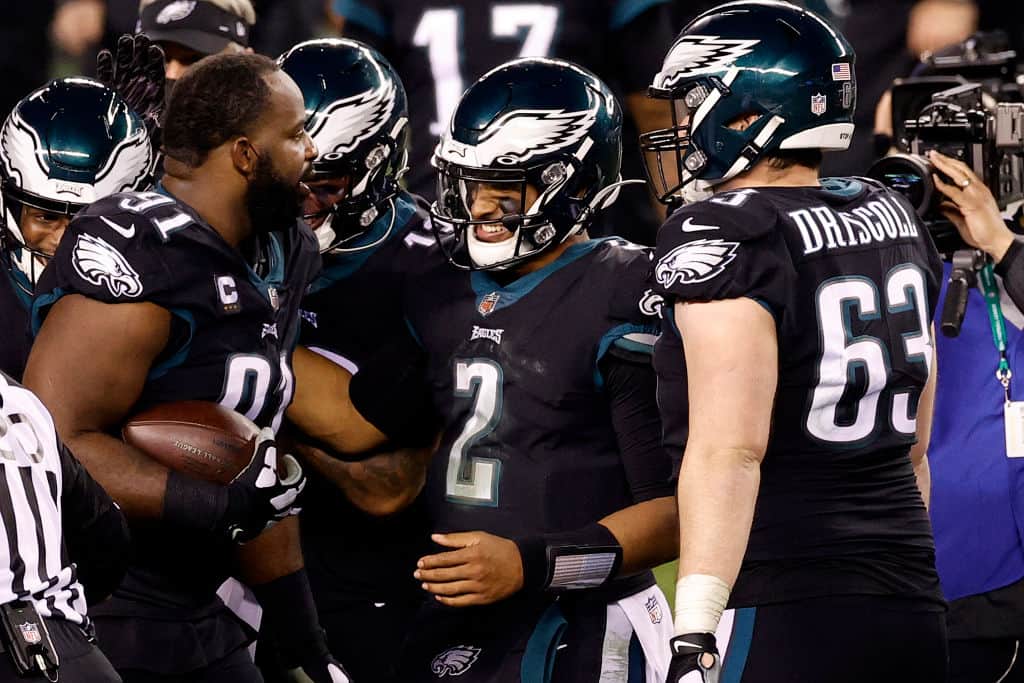 The 2021 Philadelphia Eagles are not rebuilding. They’re pre-building. Demolishing the old roster, paying to have the debris hauled away, and doing all the other messy stuff that comes before the fun of dreaming about what a bad NFL team can do with all its extra picks and cap space.

In the wake of the Carson Wentz trade and the release of wide receiver DeSean Jackson, it’s clear that the 2021 season will be more about getting out of cap debt and turning the page on the Super Bowl era than about developing Jalen Hurts or installing Nick Sirianni’s program and vision (whatever those may be).

Does that mean, however, that the Philadelphia Eagles won’t be competitive until 2022, 2023, or the year 2525? The deeper we dive into the Eagles’ roster and cap situation, the more dire their predicament looks for the foreseeable future.

Any hope that the Philadelphia Eagles were poised for a quick turnaround in 2021 evaporated when Wentz fetched just a third-round pick and a conditional 2022 draft pick from the Indianapolis Colts. The Wentz trade itself wasn’t terrible, given the corner the Eagles painted themselves into. Yet, they needed a first-round pick this year to jump-start any potential short-term reboot.

Wentz will gobble up an other-worldly $33.8 million in dead cap space in 2021. That will probably work out to about 15% of the Eagles’ cap budget once the NFL finalizes cap figures for next year. Even with Wentz shifted to the “sunk costs” section of the spreadsheet and Jackson gone, the Eagles must still clear away about $42 million to become cap compliant.

That won’t be easy. Some of the team’s most expensive 30-something veterans — Fletcher Cox, Brandon Graham, Brandon Brooks, Jason Kelce, Zach Ertz, and others — are still owed lots of prorated bonus bucks from post-Super Bowl contract extensions.

In other words, cutting some of the Philadelphia Eagles’ most expensive veterans won’t clear much cap space. It will only move a chunk of their compensation over to the Wentz Memorial Dead Money Heap. For example, Jackson’s release saved the Eagles about $4.9 million. Yet, it comes at the cost of $5.8 million in dead space.

Eagles fans on Twitter, in my text messages, and around my neighborhood during snow-shoveling breaks have repeatedly asked me, “what was Howie Roseman thinking?” This is, of course, references the many massive contracts he’s negotiated. Some also ask the related question, “how the &%*$ does Howie Roseman still have a job?”

Well, Roseman was thinking that he was keeping a Super Bowl nucleus intact. The Philadelphia Eagles reached the playoffs despite injury plagues in 2018 and 2019. They were a popular preseason Super Bowl pick in 2019 among many of the same folks who spent last season ripping them. Roseman’s plan appeared to be working up until the moment Wentz became a turnover mega-producer.

As for why Roseman still has a job, 2020 was the first truly bad Eagles season since he retook the reins of the franchise from Chip Kelly in 2016. Owner Jeffrey Lurie chose to hold Doug Pederson and Wentz accountable for last season’s collapse, but not Roseman.

It’s debatable whether that was the right call. Yet, Roseman has proven adept at cleaning up salary cap spills in the past. That includes the Sam Bradford/DeMarco Murray mess he inherited from Kelly. He’s as qualified as anyone to at least start the pre-building/rebuilding process.

Eagles expect to be bad regardless of who they restructure

I’m not going to go line-by-line through the contracts of players like Ertz, Derek Barnett, and a myriad of others to figure out where that $47 million in cap savings will come from. It’s complicated, tedious, and depressing. Rumors are already circulating about additional cuts that may already have happened by the time you read this.

No matter whom the Eagles restructure, release, or trade, the 2021 roster will be a hodgepodge of aging Super Bowl holdovers and youngsters who haven’t flashed much more than modest and sporadic potential. Not only will the Eagles likely be awful in 2021, but they could still be old and expensive at some positions.

Their salary structure and cap situation are so bad right now that it will make more sense just to pay some veterans to play out the string for another year than to replace them.

Will the Eagles draft another QB in 2021?

Jalen Hurts looked like a surefire franchise QB of the future in his handful of 2020 starts. That is so long as you ignore his low 52.0% completion rate and 9 fumbles. In truth, the more defenses saw of him, the worse he looked. In fact, while Hurts had a few outstanding moments and flashed some potential, he only looked like a “surefire franchise quarterback” if graded on the “we’re sick of Wentz and want someone else to talk about” curve.

Drafting a challenger for Hurts with the No. 6 pick may be risky. However, it’s less risky than handing Hurts the keys to the organization’s future because he led the Eagles to a win over the Taysom Hill Saints. Drafting another QB would also be in line with the franchise’s “quarterback factory” philosophy. After all, Hurts is in Philly in the first place because the Eagles sought a hedge for Wentz in the 2020 NFL Draft.

The sixth pick in the 2021 NFL Draft could turn into the third-best quarterback prospect. This assumes the Cincinnati Bengals, Miami Dolphins, and Atlanta Falcons don’t select quarterbacks or trade down. A huge barrel of ifs.

This would put the Eagles in prime position to grab a caliber QB. The truth is that they may not be in a more favorable position in the future. Again, this makes as much sense as drafting someone like LSU wide receiver Ja’Marr Chase and crossing their fingers just about everywhere else.

If the Philadelphia Eagles do decide to draft Trey Lance (another North Dakota State guy!) or Mac Jones (another Alabama guy!), it will probably only make them weaker in 2021. But the difference between a 4-13 and 5-12 record (the 17-game season is happening, folks, so get used to it) won’t matter in the long haul if the Eagles acquire some certainty at quarterback.

Let’s put a pin in the draft-a-QB scenario for now and assume that the Philadelphia Eagles draft conventionally. Thus, Hurts settles in as the starter in 2021. Let’s look two years down the road and determine who among the players on the current roster could be a playoff-caliber starter by 2022.

That’s about it. Guard Brandon Brooks and defensive tackle Javon Hargrave could still be quality players in 2022. However, they will be premium prices at low-leverage positions. Barnett has been a mild-to-moderate disappointment and may not survive the next few weeks of cuts. Although, a restructure is also very possible for Barnett.

Dallas Goedert will be a free agent in 2022. He’s a fine player, but nothing he has done in three NFL seasons indicates that he’s about to become a major difference-maker. Greg Ward is a Philly favorite who would make a fine fourth receiver on a good team.

In addition to the players mentioned above, there are several others like right tackle Jordan Mailata who played just well enough to hold their own for a 4-11-1 team last year. However, we already know none of them project as much more than adequate starters.

Keep in mind that it isn’t normal to look two years down the road and see nothing but a bunch of wishes and maybes on an NFL roster. For example, the 2022 Colts can expect to protect Wentz with All-Pro guard Quenton Nelson and solid right tackle Ryan Kelly. Both players will be on new contracts by then. In addition, they’ll still have Jonathan Taylor and Michael Pittman as Wentz’s weapons, amongst others.

LB Darius Leonard and All-Pro DT DeForest Buckner will still be spearheading the defense on the other side of the ball. Keep in mind that Buckner will only be 28 years old and still under contract. All that before we even start projecting prospects and injury cases like wide receiver Parris Campbell.

Most NFL teams have a nucleus of potential stars. If not, they are more likely similar to the New York Jets in that they have a relatively clean slate to work with. The Philadelphia Eagles’ cupboard of prospects is bare because of several recent draft whiffs (Arcega-Whiteside, Sidney Jones).

In addition, the Eagles’ 2020 roster was absolutely bloated with guys like Vinny Curry, Malik Jackson, Nickell Robey-Coleman, and Richard Rodgers playing roles that youngsters should have played. That’s not counting Jason Peters, Alshon Jeffery, and Jackson. All are former stars who have spent multiple seasons on the midweek injury reports.

The Eagles’ salary cap situation won’t make them contenders in 2022, either

Again, Roseman was trying to extend a Super Bowl window. Yet, the Eagles crossed the event horizon in 2020. All of those veterans sucked the franchise’s future into a black hole.

Now, here’s the worst part. Some of the Philadelphia Eagles’ veteran contracts are so humongous that the team will still be massaging their cap situation come 2022!

The Eagles can designate two players as “post-June 1” cuts (even if they happen tomorrow). That allows the team to spread the dead money over two years. Additionally, there likely will be a second round of veteran cuts next year. So while the salary cap is likely to increase significantly in 2022, and the Wentz contract and some others will be off the books, the Eagles will still be pinching pennies.

The Eagles won’t be playoff contenders in 2022, either. They will be a rebuilding team with a young quarterback and a few pieces. Additionally, they’ll have an extra first or second-round pick to play around with. Perhaps they’ll have just enough cash to dip a toe into free agency as well. Their story will just be beginning next year. This year is just the denouement of the Wentz/Pederson era.

What happens next for the Eagles depends upon whether Sirianni was the right choice as head coach and Roseman can straighten out the roster sooner than later. Additionally, whether Hurts or someone else truly asserts himself as a franchise QB and/or the last two draft classes pay any real dividends is a major crux. To a degree, it matters if/when the rest of the NFC East teams figure out what the heck they are doing.

What happens next also depends upon whether Lurie is the owner he appeared to be through the Andy Reid era. That is, as mostly a hands-off guy. Or, maybe, he’ll continue to be the Jerry Jones Lite he has looked like recently.

The machinations around the Wentz-Hurts controversy, Pederson’s firing, Sirianni’s shaky first impression, and the garbled messaging around Wentz have made the Philadelphia Eagles look dysfunctional. There’s a real risk that the Eagles are about to embark upon an era of coach shuffling and irrelevance. For a franchise that reached the playoffs 13 times since 2000, that will be a culture shock.

For now, all Eagles fans can do is cheer. Cheer for trades that ship 2017 heroes out of town while combing through mock drafts. Root for Wentz and the Colts to play well enough to turn that conditional 2022 draft pick into a first-rounder and wait for the team’s outlook to become brighter. Sadly, it looks like it will be a long, long wait.