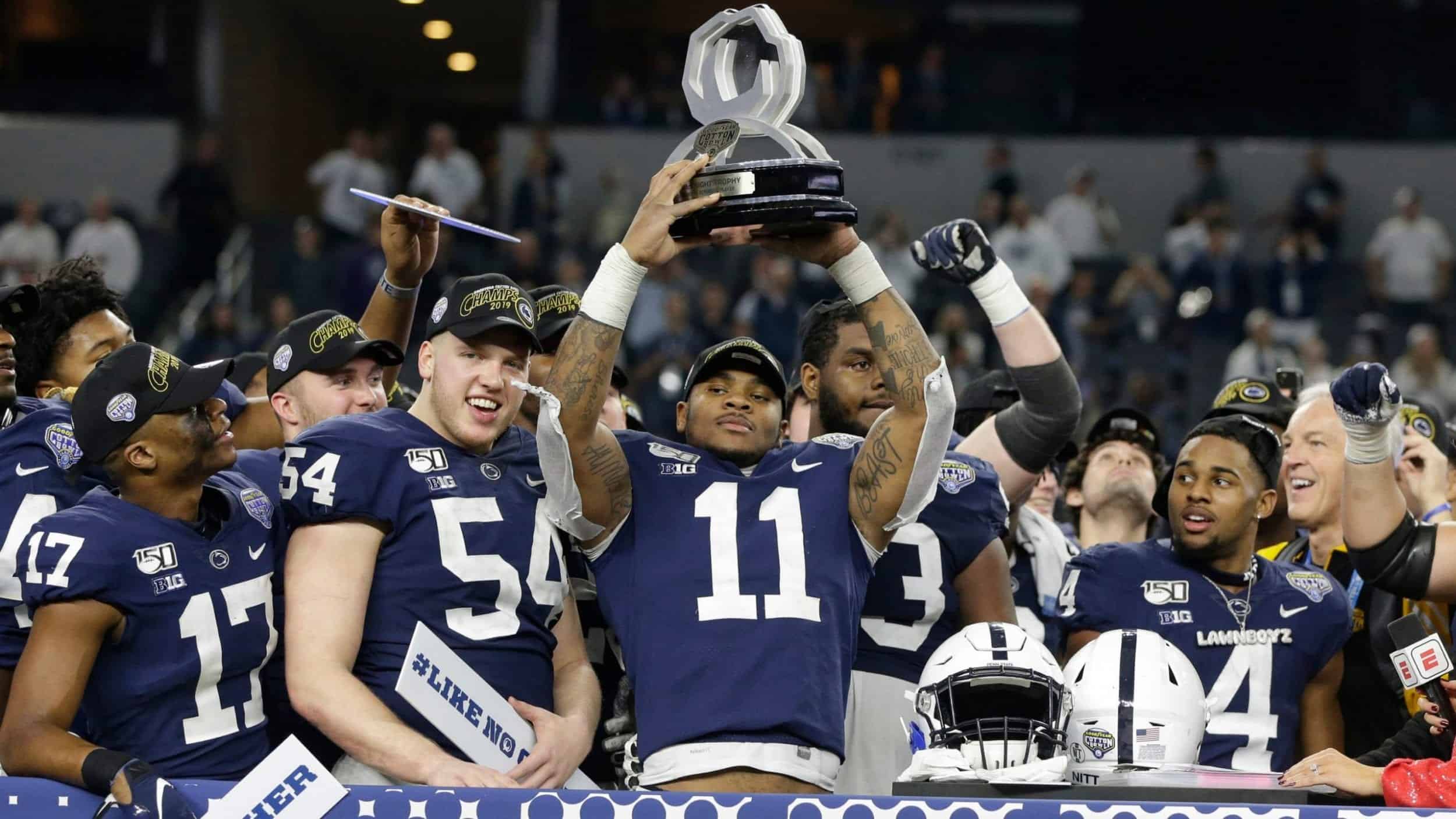 The Big Ten Conference is a hotbed for top-end NFL talent each season, and 2020 is no different. The Big Ten’s 2021 NFL Draft class has loads of terrific talent from the likes of Michigan, Ohio State, Minnesota, and Penn State, among others.

The Buckeyes have reigned supreme in recent years and have top talents like Justin Fields and Shaun Wade, and the Golden Gophers can make a case as the most talented group with players like Rashod Bateman and Tanner Morgan. However, the Nittany Lions may be the cream of the crop, and the depth of the group in Happy Valley puts the rest of this conference to shame.

Penn State has tons of playmakers on both the offense and defense. Below I will examine three of the biggest strengths of this 2021 Penn State draft class and explain why this will be the most sought after group next April. The boys in blue and white will be the talk of the town in Las Vegas in 2021.

Journey Brown and the running game

Even after the losses of recent stars such as Saquon Barkley and Miles Sanders, the Penn State running back train keeps chugging right along. As I previously discussed, the junior-to-be Journey Brown is the next great Nittany Lions’ running back in Happy Valley.

Brown is also joined in the backfield by former top recruit and future draft pick Noah Cain. With Wisconsin’s Jonathan Taylor and Ohio State’s J.K. Dobbins gone, Penn State has a solid claim for the best backfield in the Big Ten conference.

Both runners are incredibly talented and will be boosted in the run game by top talent on the offensive line. Tackles Will Fries and Rasheed Walker are both ascending players in the 2021 NFL Draft process and provide excellent protection and push up-front. Junior guard Mike Miranda is another extremely talented player on the offensive line. Each of these players could hear their names called early on day three or potentially even sooner.

The strength of the offensive line is the dominant run-blocking ability of these players, and that will ensure that Brown finishes as a second-day pick in the 2021 NFL Draft. He has the speed to separate in the open field and underrated tackle-breaking ability. Cain is exceptionally shifty and should join Brown as an early-round pick as soon in the 2022 NFL Draft.

Pat Freiermuth and the passing offense

The offensive line will do wonders for the running game, but they also need to support an extremely prolific Big Ten passing offensive in 2020. Quarterback Sean Clifford has been a standout since taking over for former starter Trace McSorley. In 2019, Clifford was named the full-time starter and passed for over 2,600 yards and 23 touchdowns with only seven interceptions.

Clifford will be without top target K.J. Hamler this season after the Denver Broncos selected Hamler in the 2020 NFL Draft. However, Penn State returns all-world tight end Pat Freiermuth and another supremely talented receiver in Jahan Dotson.

Dotson, the junior receiver, has flashed big-play ability since his freshman year and averaged over 18 yards per catch as a sophomore in 2019. As the number one receiver in 2020, Dotson should flirt with 1,000 yards and double-digit touchdowns as one of the more talented pass-catchers in the conference.

Despite all the big names on offense such as Brown, Clifford, and Dotson, the biggest draw on this team is Freiermuth. He has not only been one of the best tight ends in the Big 10 the past two years; he has a good case for the best in the country. Freiermuth took over as the starter following the loss of Mike Gesicki, and the passing offense has not skipped a beat.

At 6’5″, he has a similar size to Gesicki and is a matchup nightmare in the red zone. Look below as the big tight end settles into the zone, makes a nice catch, and bullies his way into the end zone.

They call him “Baby Gronk”. TE Pat Freiermuth should be a round one pick in the 2021 NFL Draft.

There’s a very real chance that a 6-0 #1 ranked Ohio State team visits State College to play a 6-0 Penn State on October 24. Wouldn’t that be something? #WeArepic.twitter.com/H62yVKtdeK

Freiermuth has scored 15 touchdowns the past two seasons and looks destined to hear his name called in the top 20 of the 2021 NFL Draft.

The Nittany Lions lost their top pass rusher from a year ago, Yetur Gross-Matos, to the Carolina Panthers in the 2020 NFL Draft. However, the cupboard is far from bare, as the defense returns the best linebacker in all of college football, Micah Parsons.

The junior linebacker/edge rusher is one of the most physically dominant players in the country and will be appealing to teams of all defensive schemes and makeups. Parsons is an inside linebacker by trade, but he is also an ascending talent as an edge rusher and has the power, length, and speed to make plays all over the field.

In terms of edge-rushing talent, the team also returns junior defensive end, Shaka Toney. Toney accumulated 6.5 sacks and eight tackles for a loss in 2019. He figures to improve on those numbers with a host of great defensive playmakers around him.

Notable playmakers in the secondary

Speaking of those playmakers, two players in the secondary that will hear their names called in the 2021 NFL Draft are safety Lamont Wade and cornerback Tariq Castro-Fields.

Wade is a smaller safety at 5’9″ but he packs a punch. He forced three fumbles during Big Ten play last season and provided excellent leadership and experience not only in the secondary but also for the entire defense.

Castro-Fields is one of the more physical defensive backs in the conference. He has solid length and ball skills, as he racked up two picks and broke up eight passes as a junior. He returns for his senior year after flirting with the NFL this past offseason, and aside from Ohio State’s Wade, there may not be a better corner in the Big Ten. Castro-Fields could hear his name called as early as round two in the 2021 NFL Draft.

This team could have as many as 14-15 players drafted, but the strength and depth of this defense truly separate this Penn State 2021 NFL Draft class from the rest of the Big Ten.