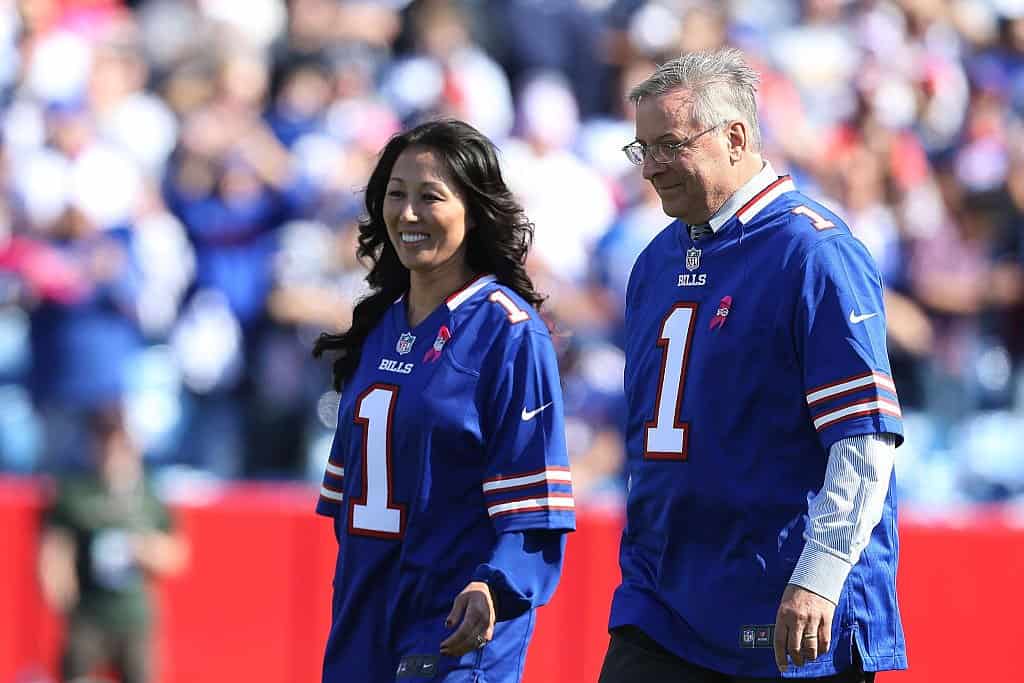 ORCHARD PARK, NY - OCTOBER 12: Terry Pegula (R), the new owner of the Buffalo Bills, and his wife Kim Pegula, take the field before the first half against the New England Patriots at Ralph Wilson Stadium on October 12, 2014 in Orchard Park, New York. (Photo by Brett Carlsen/Getty Images)
What's in this article? Click to show
Who owns the Buffalo Bills now?
How did Terry Pegula make his money?
Who owned the Buffalo Bills before the Pegulas?
Want more NFL news and analysis?

The Buffalo Bills are one win away from reaching their first Super Bowl appearance since 1993. While the NFL franchise has yet to take home the Lombardi Trophy throughout their entirety, things within the organization have been on an upward trajectory under the owner of the Buffalo Bills — Terry Pegula and wife Kim Pegula.

The Bills won two league championships during their time in the AFL in 1964 and 1965. Since the NFL merger, they’ve reached the Super Bowl four times. Each appearance came in consecutive seasons from 1991-1994, but all resulted in a loss.

Now, as the Bills have a new ether surrounding the team with the success led by quarterback Josh Allen, let’s take a look at the history of the organization, starting with their leadership and how they’ve shaped the Buffalo front office and grown the Bills’ brand.

Who owns the Buffalo Bills now?

New England Patriots’ fans would probably say the Patriots have owned them in recent memory, but now that the Patriots’ dynasty has fizzled, the joke has less pizzazz.

How much did the Pegula’s buy the Bills for?

Pegula placed the highest bid on the Buffalo Bills franchise, while there were other takers with interest. Among other bidders with the desire to own the Bills, former U.S. President Donald Trump and musician Jon Bon Jovi also placed bids. Pegula’s total cost of purchase was finalized at $1.4 billion — all of which was paid in cash.

Pegula’s purchase was unanimously approved by NFL owners, and the deal officially closed on October 10, 2014. The acquisition allowed the Pegula family to take over more sports ownership in the city of Buffalo.

How did Terry Pegula make his money?

The Buffalo Bills’ owner had a surplus of investments in natural gas development, real estate, and professional sports. In doing so, he’s worked his way up the totem pole in becoming a multi-billionaire. Pegula is currently worth $5.1 billion. He sold the bulk of his investments in the oil and gas industry to Royal Dutch Shell for $4.7 billion in 2010.

Related | Calculating Josh Allen’s next contract with the Buffalo Bills

Pegula also holds shares in Black River Entertainment — a country music label based in Nashville, Tennessee. Additionally, he also possesses ownership of Impact Sports Performance, which is a training facility for athletes. The company includes two facilities, one of which is located in Buffalo, while the other is based in Boca Raton, Florida.

Along with purchasing the Bills, Terry and Kim Pegula launched One Buffalo — a marketing campaign for the city’s sports teams. Since then, the company has transformed into a brand and has partnered up with Southern Tier Brewing Company and Perry’s Ice Cream.

Who owned the Buffalo Bills before the Pegulas?

Prior to Terry and Kim Pegula purchasing the team, the Buffalo Bills’ owner was their founder, Ralph Wilson. The sale of the Bills came after the passing of Wilson. He was among the original founding owners of the AFL before merging with the NFL in 1970. In 2009, Wilson was inducted into the Pro Football Hall of Fame.

How much did Ralph Wilson pay for the Buffalo Bills in 1959?

Wilson, the Buffalo Bills’ first owner, founded the team in the late 1950s for $25,000. Wilson was a Detroit-based businessman prior to his avenue into the sports world. Ultimately, the Wilson family netted just north of $1.3 billion from their initial buying price. Compared to the selling price to the Pegulas and Ralph’s original investment, the founding father’s family did OK for themselves.

Nick Cothrel is an editor and writer for Pro Football Network, covering the NFL and all of its tangents. You can read more of his work here and follow him at @NickCothrel on Twitter.