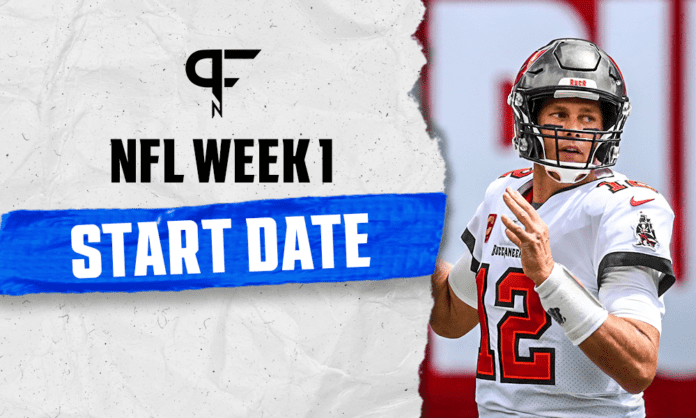 When does the NFL season start in 2021? Week 1 kicks off September 9

The start of the NFL season is nearly upon us as the Dallas Cowboys and Tampa Bay Buccaneers kick off Week 1 on September 9.

The start of the NFL season is drawing ever closer. After more than six months without competitive NFL football, we are set for more than 20 weeks of action. Let’s take a look at when the season begins and the NFL Week 1 schedule.

The first game of the 2021 NFL season will take place on Thursday, September 9. The defending Super Bowl champion Tampa Bay Buccaneers will host the Dallas Cowboys at Raymond James Stadium.

The NFL opener will start the first 17-week season in NFL history. The season stretches from September 9 through to Super Bowl LVI on February 13, 2022.

What is the full schedule for Week 1 of the 2021 NFL season?

The 2021 NFL season will start with some intriguing matchups

There are several interesting matchups at the start of the 2021 NFL season. The kickoff game could be an NFC Championship preview. The Buccaneers are the favorites in the conference to go to the Super Bowl, while the Cowboys are looking to bounce back with Dak Prescott under center following his ankle injury. Both teams will have Super Bowl ambitions in 2022.

The game between the Steelers and Bills sees the No. 2 and No. 3 teams in the 2020 AFC Playoffs go head to head. The Bills are one of the most exciting teams in the conference. Led by Josh Allen, they will be looking to go one step further than the AFC Championship Game this year. Meanwhile, the Steelers’ 2020 season fell apart in December and January. They hope to right the ship in what could be Ben Roethlisberger’s final season in Pittsburgh.

The Browns and Chiefs game is a repeat of a playoff game from last season. The Browns nearly upset the Chiefs in Kansas City in the AFC Divisional Round. Led by their impressive defense, the Browns will be looking to lay down a marker early in the season. Additionally, the Chiefs will be looking to answer questions about their offensive line against a stout pass rush.

There are two matchups between NFC playoff teams to start the NFL season, as the Saints and Packers and Bears and Rams face off. All four enter the 2021 campaign with major question marks surrounding them.