What kind of fallout will the Julio Jones trade have on the Titans offense?

By Lucas Ellinas
June 14, 2021
Jump around this article Click to show
Julio Jones was productive last season despite struggling with injuries
Although he is getting up there in years, Jones still provided value to Atlanta’s offense
Jones should complement A.J. Brown well
Jones gives the Titans something they didn’t have last season
In the fallout from the Jones trade, Tennessee’s offense will be lethal
Want more NFL news and analysis?

The Tennessee Titans made headlines last week when they announced the addition of veteran wide receiver Julio Jones in a trade with the Atlanta Falcons. Let’s sift through the variables and determine the fallout from Jones joining Tennessee’s offense — do the Titans have the best WR duo in the NFL?

Julio Jones was productive last season despite struggling with injuries

Jones missed seven games with a hamstring injury in 2020, but he was still a highly effective player when he was healthy. During his limited playing time, he totaled 771 yards and 3 touchdowns.

Those seem to be decent numbers, but it is difficult to compare them to those produced by other players who were available for a complete season. As such, we need a different method if we are going to properly determine how valuable he was to the Falcons offense in 2020.

Although he is getting up there in years, Jones still provided value to Atlanta’s offense

To properly evaluate Jones’ level of play last season, let’s turn to the Offensive Value Metric (OVM). The OVM is a grading system created by the (Bx) Movement for scenarios like these. It measures player performances based on how responsible they were for the statistics they produced, rather than purely by their box scores.

In 2020, Jones earned an OVM grade of 33.34. That ranked 25th out of 97 qualifying wide receivers, making him the highest-graded player currently on Tennessee’s roster. If Jones can continue to be such an efficient player, Tennessee will be thrilled with their trade.

For a more in-depth look at Jones’ OVM performance in recent years (allowing us to determine the fallout from his trade better), we must examine his weekly grades. In the charts below, you can see Jones’ grades from each week of 2019 and 2020 marked by the black dots. For comparison, the league-average OVM grades for wide receivers from each of those seasons are represented by the yellow lines. 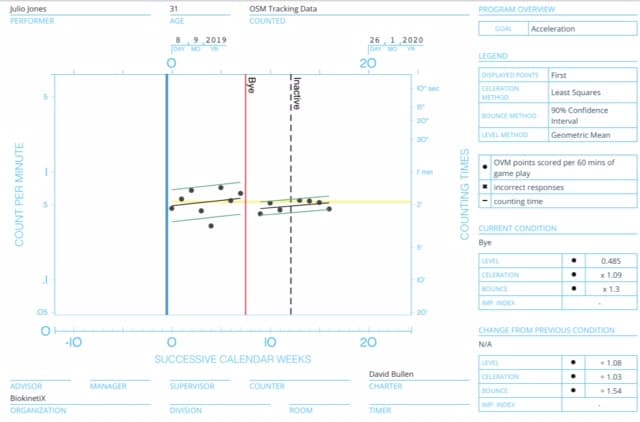 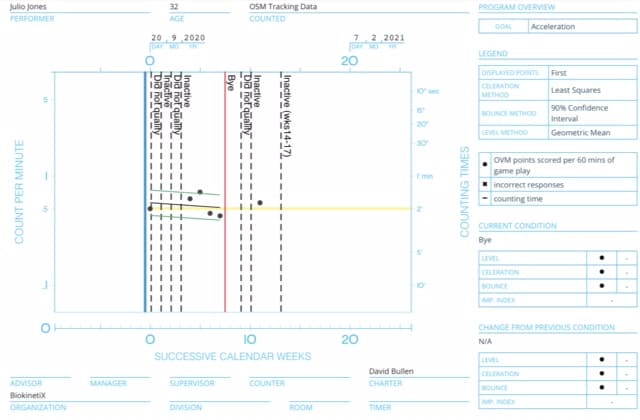 In both seasons, Jones was relatively consistent, generally producing grades around the league average. He only earned one grade below 20 points in either year and even then, only slightly.

One of the most interesting aspects of the Jones trade is how different he is from the Titans’ current star wide receiver, A.J. Brown, a fascinating player from an advanced metrics perspective.

He is perhaps the best player at creating yards after the catch in the entire NFL. Unfortunately, while Brown’s explosive potential is plain to see, he often struggles with consistency, as evidenced by his catch percentage of 66.04%.

Jones is a solid enough player after the catch, averaging an additional 4.7 yards per reception, 1.4 yards higher than expected according to the NFL’s advanced metrics. Yet, he can’t match Brown. However, he is a far more reliable player than his new teammate. Last season, Jones’ catch percentage was more than ten percent higher than Brown’s (75%).

Jones can be a reliable presence to go along with Brown’s electric playmaking, someone who can step up on critical third downs while Brown creates big plays.

Jones gives the Titans something they didn’t have last season

The role of a consistent target in crucial situations is often filled by a tight end. And Tennessee currently has a void at the position since they allowed Jonnu Smith to walk in free agency. That said, it is worth noting that Smith wasn’t a particularly reliable player last season either. His catch percentage was even lower than Brown’s (63.08%). Between Smith and Brown, the Titans didn’t really have a pass catcher they could rely on last season. Jones can be that player for them in 2021.

In the fallout from the Jones trade, Tennessee’s offense will be lethal

Jones will be joining an offense that already includes the aforementioned Brown, the oft-underrated Ryan Tannehill, and of course, the relentless force that is Derrick Henry. With their powers combined, Tennessee’s offense will be a handful for even the best defenses. We’ll see if that will be enough to get past the other elite teams in the AFC next season.

Keep Reading! Julio Jones Fantasy Impact: What can we expect from this Titans offense?