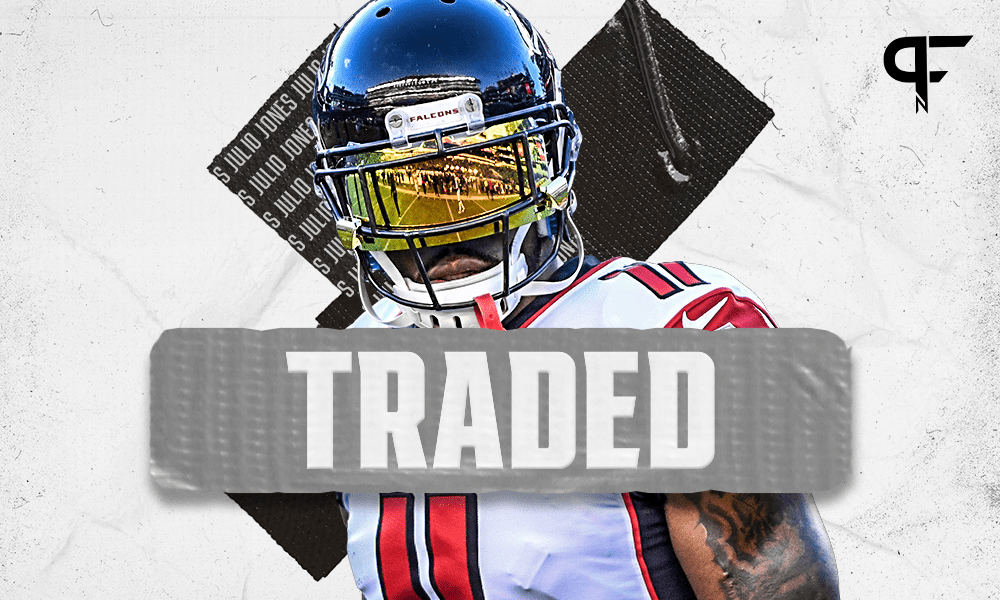 Will the Julio Jones trade be enough to make the Titans contenders in the AFC?

By Dalton Miller
June 7, 2021
What's in this article? Click to show
Julio Jones’ impact on the Titans’ playoff hopes
Jones and Brown: The most dangerous duo in football
Jones’ impact on Titans doesn’t make them AFC contenders
Want more NFL news and analysis?

The acquisition of Julio Jones has a massive impact on the Titans’ hopes of being AFC contenders. The Titans ranked ninth in Pro Football Network’s initial power rankings heading into the 2021 NFL season. The move doesn’t necessarily jump them many places in the rankings, but it answers a serious question about their offense. Outside of A.J. Brown, the only other viable threat was Josh Reynolds. Along with the other losses on Tennessee’s roster, that wouldn’t make them contenders in a top-heavy AFC.

The Titans should have already been the favorites in the AFC South. It would take a complete 180 from Carson Wentz for the Colts to topple the Titans. Wentz doesn’t need to get back to 2017 form for the Colts to contend for the division, but he was far from that in 2020. The Tennessee defense was already putrid last year from an efficiency standpoint, finishing 29th in DVOA. They also ranked fourth in variance, meaning they were consistently bad.

So, the Titans lost Jonnu Smith and Corey Davis from the offense but added quite possibly the best receiver in the NFL in Jones (when he’s healthy). Furthermore, they acquired Caleb Farley and Elijah Molden in the secondary and pass rushers Denico Autry and Bud Dupree in free agency. That should help what was a nonexistent pass rush in 2020. Therefore, it’s reasonable to believe the defense will be similar to (if not better than) 2020.

Jones and Brown: The most dangerous duo in football

I said it. Mike Evans and Chris Godwin are outstanding. D.K. Metcalf and Tyler Lockett are studs. But Julio Jones and A.J. Brown take it to another level for the Titans heading into 2021.

Although Jones didn’t play up to his former dominance in 2020, some of that could be chalked up to playing with zapped athleticism. He strained his hamstring in Week 2 against the Cowboys and fought through that all year before the Falcons shut him down after Week 13.

Jones still ranked in the 86th percentile against man coverage and 76th against press coverage according to Matt Harmon’s Reception Perception project. According to Harmon, the only two routes Jones was below league average with were corner and comeback routes. He runs with a gazelle-esque stride length that eats up space like Joey Chestnut does hot dogs on July 4th.

Delano Hill had no answer for Jones on this double move, despite having five yards of cushion, staying square, and not triggering downhill on the in-breaking route. This was Week 1 Julio Jones, the healthy one the Titans look to deploy in 2021. By the time Hill flips his hips to carry downfield, he still had three yards of space between Jones, but Jones covers so much ground in his strides that no acceleration is good enough from the safety.

Jones is still that dude going above the rim and finishing contested catches, too.

But perhaps the most significant impact Jones brings to the Titans’ offense is that he forces a difficult decision on defensive coordinators. The Titans now have two elite receivers in space and the most physically imposing runner in the NFL in Derrick Henry.

The Titans’ addition of Jones should only make things open up more for Brown because defensive coordinators must now pick their poison on the outside. Brown is already an elite receiver at the NFL level going into his third professional season.

All of this means there isn’t a more dangerous post-catch threat of the true WR1 targets in the NFL. D.J. Moore wins the case for second, catching 67 passes and averaging 5.8 yards after the catch. Maybe there is something to guys using initials for their first name with five-letter last names? Parents, take note if you want to raise a YAC monster.

Brown isn’t just a YAC monster, though. He’s improved his route running drastically since his time at Ole Miss. His running back frame and physicality are used much more efficiently to create space against man coverage, and his footwork and ability to attack leverage have improved.

This may look inconspicuous as a route, but it says a great deal about Brown’s improvements as a route runner. Marlon Humphrey is one of the top 10 cornerbacks in the NFL. Brown releases inside initially and gets back on the red line by wiping the jam away. But the most impressive part of this rep is how flat and explosive this inward break is. He uses his frame well to lean into Humphrey before taking a large gather step with his plant foot.

It is a route that shows he’s found a way to blend his overwhelming physicality with the explosive cuts he once only showed with the ball in his hands. The acquisition of Jones by the Titans means Humphrey might be covering him, giving Brown an even easier matchup. He may not get the volume some expected, but he could be even more efficient, meaning Jones’ fantasy impact shouldn’t tank either.

What are defenses going to do? What can defenses do? Henry already feasts against eight-man boxes unlike any other back in the league can. Are defenses really going to leave a single-high free safety out there against the likes of Jones and Brown? Henry will remain at the top of the food chain when it comes to the running back position.

It will be fascinating to see how teams choose to defend the Titans’ offense with the addition of Jones. Ryan Tannehill has established himself as a good NFL quarterback since leaving the weight that was Adam Gase during his time with the Dolphins. He was particularly dangerous in play-action attempts during the 2019 season. He followed that up by having a fantastic all-around 2020 season. Can Tannehill take the next step and make the Titans AFC contenders in 2021?

That is, it’s hard to see a scenario where that secondary plays well enough for them to be AFC contenders in 2021. If Kristian Fulton can round into form and Farley hits, 2022 could be the year the Titans really contend. The Browns, Ravens, and Chiefs all still feel like superior teams heading into 2021. This trade makes the Titans a lot more entertaining, though!

Keep Reading! Top storylines to follow for all 32 NFL teams in 2021