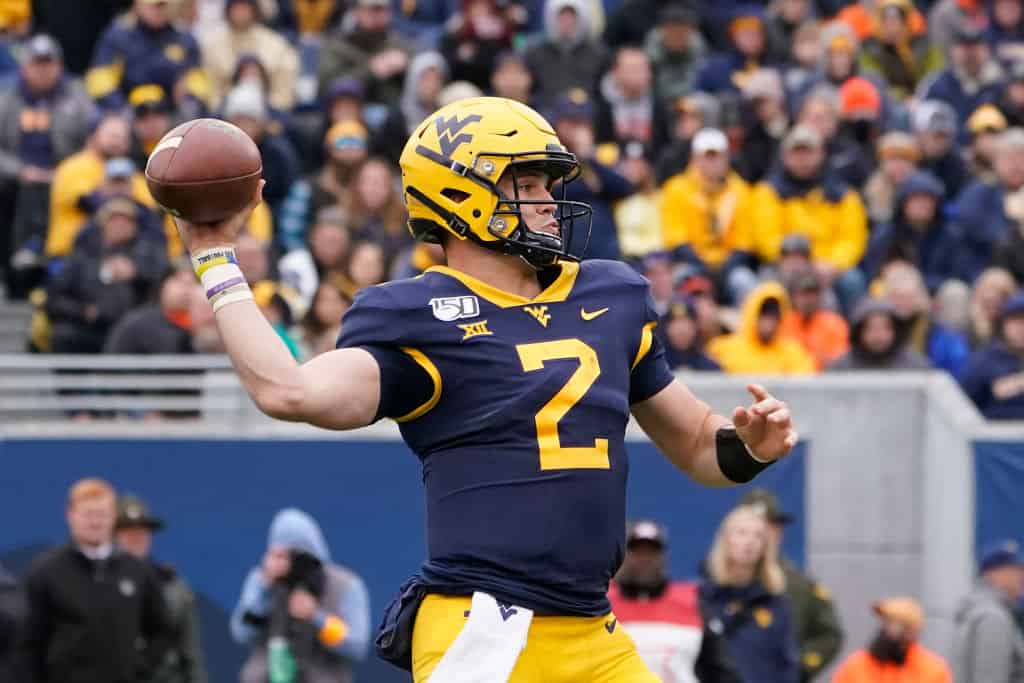 Every year, we talk about the next big quarterback. Quarterbacks are the most exciting position in football, and they always generate massive amounts of excitement. Analysts and scouts across the country scramble through mountains of tape to find that next great quarterback prospect. This year, scouts won’t have to look much further than Morgantown, West Virginia, where quarterback Jarret Doege looks to take the Mountaineers back into the national spotlight.

Doege showed up on radars when he beat out James Morgan (the New York Jets fifth-round pick in 2020) at Bowling Green as a true freshman midway through the season. That season, Doege started seven games for the Falcons, throwing for 1,381 yards, 12 touchdowns, and three interceptions, while completing almost 64% of his passes.

Doege was the first freshman quarterback to play in a game for Bowling Green since Brian McClure in 1982. Doege emerged as the full-time starter as a sophomore and completed 62.2% of his passes for 2,660 yards, 27 touchdowns, and 12 interceptions. During the season, the coaching staff that recruited him to Bowling Green were all fired after a 1-6 start. Following that, Doege made the decision to transfer away from Bowling Green and start a new journey somewhere else before his junior year.

Doege made his way to Morgantown, West Virginia, where the Mountaineers were reeling from the loss of quarterback Will Grier and head coach Dana Holgorsen. With former Troy head coach Neal Brown taking the reigns, Doege felt at home. Brown was the offensive coordinator at Texas Tech when Jarret’s brother, Seth, played quarterback for the Red Raiders. The fit felt right for Jarret, and he was granted immediate eligibility for the Mountaineers.

Doege didn’t start right away for the Mountaineers. Oklahoma transfer Austin Kendall got the starting nod for the Mountaineers. Things didn’t go as planned for Kendall, however, as West Virginia started 3-5. Doege was thrust into the Texas Tech game for West Virginia midway through the third quarter after Kendall threw an interception to Texas Tech safety, Damarcus Fields. Doege didn’t do much but lead West Virginia on a touchdown drive near the end of the game to make the score a little less blown open.

It wasn’t until the Kansas State game that Doege got to show what he could do. West Virginia came into the game as a 14-point underdog. Yet Doege led the Mountaineers on a 24-20 upset, capped off by a stunning 50-yard touchdown throw on third and 22 that pulled the Mountaineers ahead, and stunned the Kansas State crowd. Doege took a massive hit on the play but stood strong and delivered a strike downfield to wide receiver Bryce Wheaton, who was wide open downfield.

Doege would cement himself as the starter for the next two games against Oklahoma State and TCU. West Virginia lost by three to the Cowboys but won 20-17 over TCU to end the season on a high note. Going into 2020, Doege earned the starting job for this season.

Doege led West Virginia to a blowout win over Eastern Kentucky Week 1, displaying a total command of the offense and all the playmaking traits that earned him the starting nod in 2019. In a superb performance, Doege went 16/20 for 228 yards and three touchdowns before being pulled at halftime up 42-7.

What makes Doege a breakout candidate?

The biggest thing about a successful breakout player is that almost no one knows who they are. After only starting four games for West Virginia, Doege isn’t on the national radar yet. His tape reveals an advanced level of play that belies the lack of attention he has received.

Doege’s tape may not entice some scouts due to his lack of elite arm strength. Doege isn’t going to throw the ball over the moon like some quarterbacks can. How does he get past this issue? With an above-average grasp of timing, anticipation, and accuracy. Much like Joe Burrow did last year, Doege displays a high command of his offense and high levels of intelligence and manipulation.

Doege’s manipulation of the safeties at the top of his drop opens up the middle of the field for him to hit his receiver right on the money and clears up the passing lane. Doege’s experience on the field and maturity show up on plays like this.

These plays litter Doege’s tape. He does a similar play against Oklahoma State here. He flicks his eyes over towards the deep route, and the trailing safety follows that receiver, leaving the crossing route wide open.

This is NFL-caliber stuff. Many top picks don’t have as great a grasp on defensive manipulation like Doege does. In last year’s class, Joe Burrow was a master at this skill, and it helped mitigate some of his arm talent issues. It’s super impressive to see in a quarterback’s tape, so Doege had my eyebrows rising while going over his tape for this article.

Improvements throughout the season

His accuracy has also increased by leaps and bounds. His placement can get a little high when he tries some throws with increased velocity, but generally, he’s right on the money with throws. His receivers don’t have to go out of their way to grab the ball. Timing, manipulation, and accuracy can go a long way in the NFL. Drew Brees has made a living off of this, especially in recent years when his arm talent has fallen off.

Despite not having elite arm talent and elite athleticism, Doege still has enough playmaking ability to make throws out of structure and makes throws downfield accurately. He won’t fool anyone on a read-option, but West Virginia features him on several rollout plays and a few RPOs, and he can scramble to extend the play. His footwork in the pocket is also smooth and almost rhythmic. Doege displays a pro’s savvy in the pocket.

Jarret Doege isn’t a perfect quarterback prospect. By no means am I saying he will be the next Burrow or Drew Brees because he does a lot of similar things. He has to consistently show this skill across more than four games. He has great tape, but the difference between him being a good prospect and a top prospect will be continued growth in these areas and consistent showings.

The arm talent will be an issue for some teams, and it will give him a backup status almost immediately for many of them. Is it the end all be all? Should we write off Doege as a quarterback prospect simply because he doesn’t have the arm talent of a Josh Allen or a Jordan Love? No, he still has the ability to make plays off-script. His skill set allows him to extend plays with his legs. He shows advanced mental acuity for his position.

The advanced mental progressions and traits like that are NFL-caliber traits that many quarterbacks who have the big arm just don’t do, even several years into their professional career. Things like this give me hope that Doege can be that breakout player because he’s already so ahead in really critical areas that are essential for quarterback play. Traits like what he’s shown on tape so far translate far more into NFL success than the big arms do. For now, Doege is primed to break out onto the national stage as one of the top quarterbacks in the country.