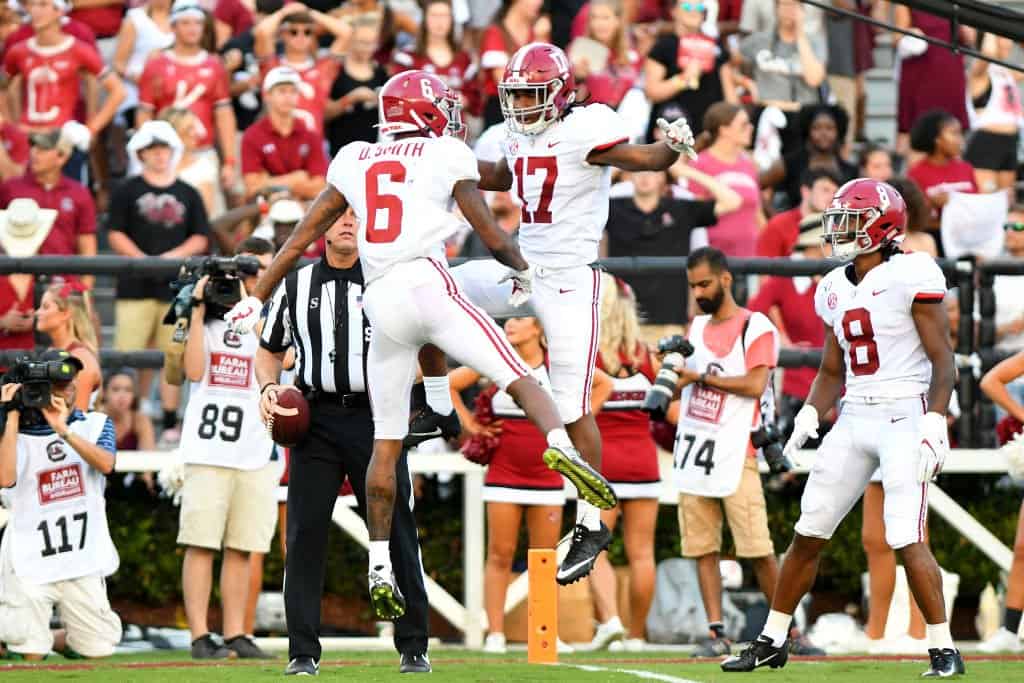 The ACC and Big 12 got underway last week and the SEC kicks off in less than two weeks. So let’s dive deep into the mailbag to talk about the latest NFL Draft rumors and news. This week’s questions cover Jamie Newman and his decision to opt out, Amon-Ra St. Brown’s draft stock, Carlos Basham Jr.’s performance against Clemson, and more. But first, we begin with some talk about how scouts view Alabama wide receivers Jaylen Waddle and Devonta Smith.

Why does there seem to be more buzz about WR Jaylen Waddle than there is about his teammate Devonta Smith, even though Smith is far more accomplished at Alabama? What’s the sentiment inside scouting circles?

I can tell you that’s not true inside of scouting circles, as scouts have Smith graded a half-round earlier than Waddle. Although in the case of Waddle, just a few scouts grade underclassmen.

Based on highlight reels though, Waddle is a better deep threat and game-breaker as well as a terrific return specialist. Smith is much more polished, and I consider him a slightly sturdier, more advanced version of Jerry Jeudy.

With the likelihood that WR Amon-Ra St. Brown has played his last game at USC, do you think there’s a chance he could move up into the first round of the 2021 NFL Draft? Or is he strictly a second-day prospect?

There’s a very good chance he ends up in the first round, especially if he runs fast prior to the draft. He’s an explosive, home-run-hitting receiver who is also a very good pass catcher.

After the big three quarterbacks (Trevor Lawrence, Justin Fields, and Trey Lance), who do you feel are the next best quarterback prospects in the 2021 draft class?

I like Chase Garbers of Cal, but he was injured last season and who knows if he’ll play when the Pac-12 finally kicks off.

I had high hopes for Jamie Newman, but I feel he made a mistake by opting out and could drop in the draft as a result.

I also like K.J. Costello, but he needs to show more consistency and flourish under Mike Leach at Mississippi State.

What are you hearing about Jamie Newman’s decision to opt out of the 2020 season and prepare for the NFL Draft? Do you think this was an unwise decision?

See above; it was not a good choice. The combination of transferring and opting out late is being questioned.

Newman is not highly rated in the scouting community at this point and has garnered late-round grades. He needed this season to show improved accuracy and pass placement.

How do you feel Carlos Basham Jr. performed against Clemson? Do you think he can be a first-round pick if he has a strong season this year?

His performance against Clemson was okay, but I noticed that several times, especially early, Clemson was running or throwing away from him purposely.

I absolutely think he could end up in the bottom third of the first round with a strong season and solid predraft workouts and interviews. Basham can do a lot of different things on defense.

It does not whatsoever. UTEP is a glorified I-AA program that, while playing in a great stadium, gets pounded regularly.

Except for Oklahoma, the Longhorns really don’t play any tough defenses this year. And even the Sooners have primarily Day 3 prospects, except for Ronnie Perkins.