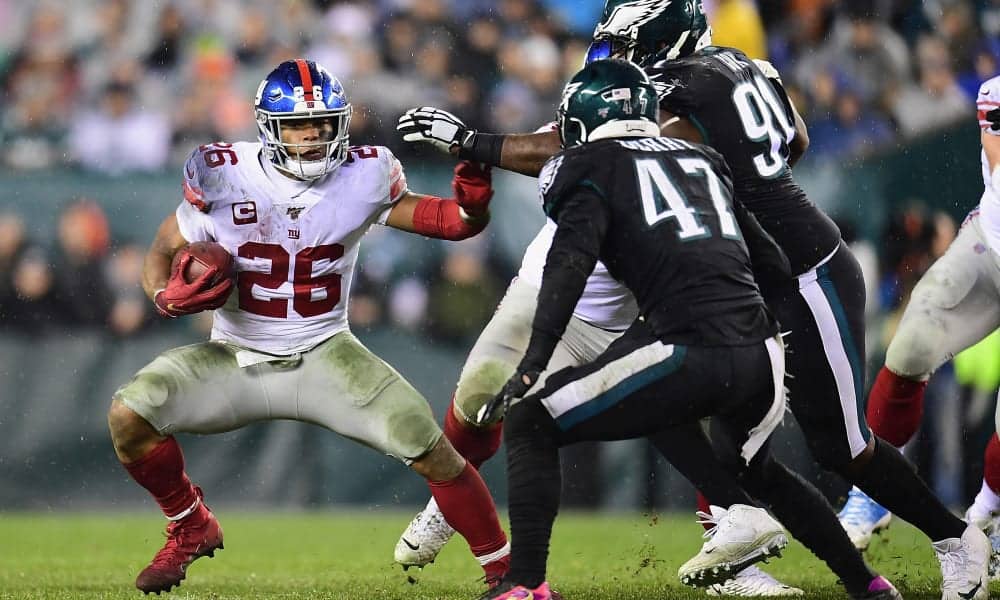 It’s been a tumultuous regular season for expert handicapper, Chris Smith, who sits at just over negative two units overall. Last week Chris started off strong with a 4-1 Saturday, only to see it all burn down on Sunday and Monday. Week 17 in the NFL is a particularly difficult one to handicap with several teams treating it like preseason game as they rest starters and prepare for potential playoff runs. Chris has a few solid plays on Sunday, however, as he looks to end the regular season in the black and gain some momentum into the postseason. Before the playoffs start, there’s still money to be won, so let’s get to our Week 17 NFL Picks!

The Philadelphia Eagles have everything to play for this week in the Meadowlands, yet they might not have enough healthy players to fill out their roster. I joked on Twitter this week that the Eagles are currently leading the NFC East using smoke and mirrors, but that the mirrors just went to the locker room for X-rays. That was before we learned that Carson Wentz’s security blanket Zach Ertz would be ruled out with broken ribs. Just two weeks ago, the Eagles needed a 4th quarter comeback to grab the overtime victory at home against these very New York Giants.

This time around, the G-Men will have Daniel Jones at quarterback, coming off a monster five-touchdown effort against the Washington Redskins. Danny Dimes will be matched up against an Eagles secondary without starting cornerback Ronald Darby. While the Philly defense has been tremendous at home this season, they’ve struggled on the road, allowing nearly a touchdown more per game to opponents in 2019. The Giants, for all their struggles this year, have looked explosive the last few weeks on offense.

Expect Pat Shurmur to pull out all the stops in an attempt to keep Philadelphia out of the postseason in what could potentially be his final game as head coach. I love the Giants getting the 4.5 points and believe the money line (+175) could also be worth a look in case the Giants pull off the upset as a dangerous home dog.

Patty Parlay went 4-1 on three-team money line parlays this season, so why not see if we can’t stretch to a four teamer on the final week of the regular season? Kids, do not attempt this at home. The basis of this parlay is obvious. Grab four teams who have ‘something’ to play for, playing against teams with no obvious extrinsic motivation.

We’ll start with the red hot Kansas City Chiefs who host a disappointing Los Angeles Chargers team. The Chiefs are playing for a potential number two seed and a first-round bye. Andy Reid dominates divisional opponents, and the Chiefs look like legitimate Super Bowl contenders. I expect them to take care of business at Arrowhead.

The New Orleans Saints are two-touchdown favorites in Carolina against a Panthers team that appears to have rolled over since the dismissal of head coach Ron Rivera. The Panthers have now lost seven straight games and will have 3rd string quarterback Will Grier begins Center for just his second NFL start. Meanwhile, the Saints have a shot at the first seed in the NFC, potentially forcing the Super Bowl to run through the Superdome.

The Titans and Cowboys are in slightly different positions to the previous two teams in this parlay, as they haven’t clinched anything at this point. If the Chiefs do indeed win at 1 PM as I’m expecting, the Houston Texans will know they are stuck as the four seed, and Bill O’Brien will have no choice but to bench a hobbled Deshaun Watson. That would mean the Tennessee Titans would be in prime position to capture the final AFC playoff spot with Ryan Tannehill and Derrick Henry taking on the Texans backups.

The Dallas Cowboys, on the other hand, need help from the New York Giants just to sneak in the back door of the postseason. While I wouldn’t put it past this Dallas team to quit on Jason Garrett if they peek at the scoreboard and see the Eagles blowing out the Giants, I have a feeling the Cowboys jump out to a huge early lead against Washington.

The Redskins have played well done the stretch, but appear as though they’ll be without the Ohio State duo of Dwayne Haskins and Terry McLaurin this week. On top of that, the Washington secondary is decimated by injury, so Dak Prescott might not have to be as precise on deep throws with Amari Cooper and Michael Gallup running free over the middle.

I actually think the Giants have a legitimate shot at upsetting the Eagles as I mentioned above, so I believe the Cowboys could miraculously find themselves celebrating an NFC East title when all is said and done on Sunday evening in Dallas.

I’ll keep it real simple here. The Buffalo Bills are locked into the fifth seed and have no reason to play their starters more than a series or two. The New York Jets will be motivated to get the win since they blew a 4th quarter lead against the Bills in Week One and had their season fall apart from there before actually rigging the ship, albeit too little too late.
Cincinnati, meanwhile, will be lead by Andy Dalton in what might be his final start in a Bengals uniform against a bitter division rival. They showed a ton of heart coming back from a multiple touchdown deficit in Miami last weekend, and this time around, there won’t be a draft pick to screw up by winning.
There’s always the chance that Baker Mayfield and the Browns put up a massive offensive output in their season finale, but I suspect Cleveland may have already mailed it in on Freddie Kitchens. I like the Jets and Bengals getting teased through the key numbers of 3 and 7 in these divisional matchups.

I wish you the best of luck with your Week 17 NFL Picks. Be sure to follow the PFN All-Access Twitter account (@PFN365AA) for live updates, Ben Rolfe’s totals article, Jason Sarney’s player props article, and listen to the Against the Spread podcast with Jason Sarney and Ryan Gosling for more NFL picks!