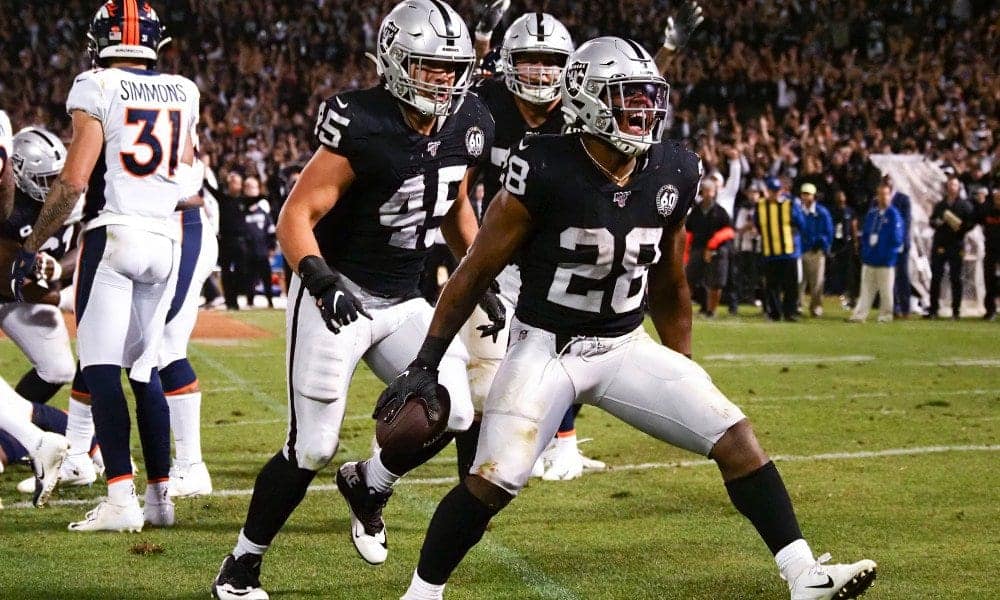 The NFL picks market is full of small sample sizes. Often, we see the majority of NFL bettors decide their picks against the spread based on what they saw the previous week. Seeing as how the NFL is riddled with small samples, it’s easy to fall prey to recency bias. So how can we distance ourselves from the pack and make smart wagers? By determining which teams might have gotten lucky by using regression to the mean in some statistical areas. I’ll attempt to pinpoint teams who are worth a play and those who are worth a fade in the sports betting market going forward. Using these analytical metrics, we can put together our Week 11 NFL game picks, as well as determine what totals and player props we can attack.

I had another profitable week in Week 10, along with other members of the PFN betting crew. You can read a recap of all of our weeks in the weekly Sheep Report. Even if it’s small, it feels good to grind out a profit and keep you guys in the green. If you want to read my thoughts on the picks I got correct, you can go back to my Week 10 article. As always, before we get to the Week 11 NFL game picks, I’ll recap my misses and see if there is anything we can learn.

When Matthew Stafford was ruled out with a back injury, I thought this teaser was dead. Ironically, the Lions came through, while the 49ers fell short. I kind of forced the teaser here, to be honest. I think sportsbooks are starting to set lines with teaser protection in mind. For example, this week, there are only three games that fit the optimal teaser model: 1) Rams side against the Bears, 2) Steelers side against the Browns, and 3) Jets side against the Redskins.

There were a few opportunities to hedge the teaser in-game, but at the time, it looked like the 49ers were going to steamroll the Seahawks. Then the 49ers lost Emmanuel Sanders and Weston Richburg, and the game just went downhill from there. There is a lesson learned here: take 10.5 points and the best quarterback in the league any time you can get it.

Also, do not force teasers.

I took the Rams at (+115) live when I thought it was 50/50 for them to win the game. In hindsight, considering the circumstances at the time, +115 was probably the right price. Live bets are tough, as you have very little time to process your thoughts. I did not go into this game looking to “live bet” the Rams. I think it is best to have a game plan for teams beforehand instead of trying to make a decision “on the fly.”

In hindsight, I wish I had gone all-in on Dak and the passing game in this matchup, as the match up with Minnesota’s secondary was pristine. I relied on Diggs receiving a larger workload with Adam Thielen not playing, but the real benefactors have been the tight ends and Dalvin Cook. As far as Zeke, they fell into an early 14-point deficit and had to play catch-up for the rest of the game. Minnesota’s defensive line played great, as well.

In what is a play on words from his “Saturdays are for the Draws” Soccer plays, Chris and I started this weekly special with a win last week, but failed to come through this week. We each pick our two favorite underdogs of the weekend and put them together in an underdog money line parlay. I think we were both spot on with how close each game was, but ultimately our dogs fell short. It will happen more often than not, but we need just one more hit at 6/1 odds to freeroll this weekly special the rest of the year.

The Saints defeat at the hand of the Falcons last week has given some people pause about the team, in particular, Drew Brees, but not me. I chalk that game up to random football variance. You would expect a Sean Payton led team to be focused coming off a bye, but performances off a bye can be volatile. Hey, “stuff” happens. It’s football and I expect the Saints to bounce back this week.

I have been on the Buccaneers for several weeks now, and have had my heart ripped out a few times. I won’t be attacking a side here, but do like the total. The Buccaneers will make this a pace up game for the Saints. Tampa Bay ranks 8th in total pace and 15th in neutral pace. New Orleans doesn’t follow suit, ranking 29th and 23rd, respectively. They do, however, pass on early downs at the 5th highest mark in the league (57%), according to Sharp Football Stats. The Buccaneers are up there with them, ranking 4th in the league in early down pass rate at 58%.

On the whole, Tampa Bay passes 62% of the time (5th most), while New Orleans throws the ball at the 6th highest rate (61%). As we know, more pass plays extend clock, make for more volume and bode well for overs. Tampa Bay ranks just 23rd in the league in passing success rate (26th on early downs) but have done so against the 7th hardest schedule of passing defenses. They have “gotten there” solely on volume all year, and I expect much of the same in this game.

I don’t need to tell you how bad Tampa Bay’s pass defense has been up to this point. They just waived former first-round pick Vernon Hargreaves, which means the guy who couldn’t beat out Hargreaves for the job will now be playing. Brees taking advantage of this matchup is the one trepidation you can have for the over. Brees should have a clean pocket in this game, so there should be no reason he shouldn’t be able to have success against arguably the worst secondary in the league.

As for Tampa Bay, the Saints will be without Marshon Lattimore for this game, which bodes well for both Mike Evans and Chris Godwin. Ronald Jones came on last week, playing a big role in the passing game, while O.J. Howard rose from the dead at the beck and call of my Best Ball teams. In all seriousness, if those two players continue their ascension, Jameis Winston should have no problem moving the ball against the Saints defense. The one downside is the Saints will be able to pressure Winston, but that isn’t even all that bad as Winston turnovers open the door for defensive scores, which also bodes well for the over.

I know I said I don’t believe Brees has suddenly fallen off a cliff, but I am somewhat hedging by taking the Buccaneers team total over as well: 21.5 (a figure they have exceeded in every game since Week 2).

I hope that you can get this number below 50.5. I don’t like it as much at 51 and above, but would still lean to the over in that spot.

This spread opened at seven and has been bet down to four and four and a half most places. I’m not a believer in the victory the Atlanta Falcons put together last week over the Saints. Weird things happen in football, and that’s precisely what I think occurred last week. The net yards per play model doesn’t agree with me, as it has these two teams even. There are some match-ups I believe favor Carolina, however.

Another factor going in the Panthers favor is their advantage in the trenches. Carolina ranks 3rd in defensive line adjusted sack rate, while the Falcons offensive line ranks 11th. They should have some success getting to Matt Ryan in this contest.

On the offensive side of the ball, Kyle Allen should enjoy a clean pocket going against the 31st ranked defensive line in adjusted sack rate. As bad as I noted, the Buccaneers pass defense is above, the Falcons have been worse. Between D.J. Moore, Greg Olsen, and Christian McCaffrey, the Panthers should be able to do whatever they want on offense.
Lastly, I’m not convinced the Falcons are rallying behind Dan Quinn. Given they exerted max effort to beat the Saints last week, I don’t see them getting up for this game.

Unfortunately for me, this number keeps trickling down, signifying market resistance to our side. That isn’t phasing me, however, so if you don’t already have a (-5.5) bet, I have no issues taking a (-4) or (-4.5) at this point. Carolina is a solid team, while Atlanta is a bottom feeder as long as Dan Quinn is the coach.

It is definitely Josh Jacobs “szn” this week. The Oakland Raiders, after defeating the Los Angeles Chargers last Thursday night, are (-10.5) favorites over the Cincinnati Bungles, the real tanking team in this league. The Bengals have not been able to stop ground games all year, ranking 30th in both defensive rushing success rate and explosive rushing success rate. Oakland ranks 3rd on the year in rushing percentage (46%), including 5th in early-down rushing percentage (51%). The Raiders offensive line have been true road-graders this year, ranking 4th in adjusted line yards.

Jacobs is a significant home favorite, running behind an elite offensive line against a terrible defensive line in an offense that WANTS to run the ball. This is an absolute smash spot for him. I love his rushing yardage upside and chances to score this weekend. I would suggest looking to the odds BetOnline offers for his yardage props, as you’ll be hard-pressed to find better prices than what they are offering.

I talked about the great match up the Panthers aerial attack has against the Falcons pass defense. The primary benefactor for that should be D.J. Moore. Over the last three weeks, he leads the team in weight opportunity and targets (30), which comes out to a 27% target share, according to airyards.com. I like him to eclipse the century mark yet again, as well as find the end zone, as he is due for some positive touchdown regression given the amount of receiving yards he has. The only touchdown odds available now exist at Oddschecker, which has Moore as a +114 underdog to score.

That’s it for your 2019 NFL Week 11 game picks. Good luck, and let’s hope we can turn a profit this week. Be sure to follow the PFN All-Access Twitter account (@PFN365AA) for live updates, Ben Rolfe’s totals article, Chris Smith’s article, Jason Sarney’s player props article, and listen to the Against the Spread podcast with Jason Sarney and Ryan Gosling for more NFL picks!