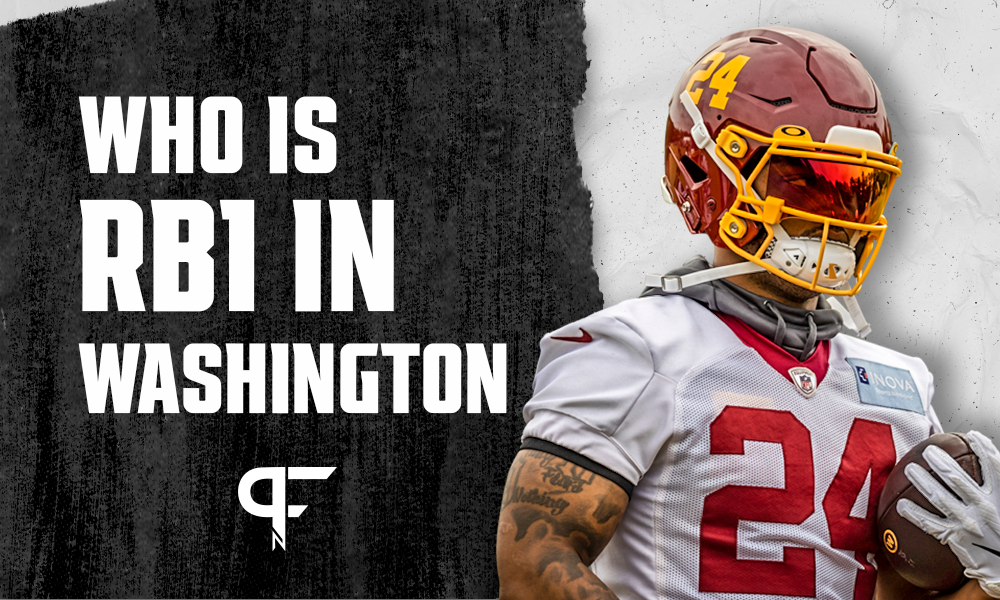 What's in this article? Click to show
Washington’s backfield will be led by Antonio Gibson again in 2021
Can J.D. McKissic come close to his target count from the last season?
Who will be the fantasy RB3 from the Washington backfield in 2021?
Want more fantasy football analysis and news?

In just one year, the Washington Football Team’s backfield underwent a massive transformation to become a sought-after commodity for many fantasy football managers. With 2021 fantasy drafts on the horizon, how does Washington’s backfield shape up with Antonio Gibson leading the charge?

It’s sometimes amazing how quickly things change in the NFL. This time last year, we all hoped Antiono Gibson was the player we thought he was. Washington’s backfield was coming off a 2019 season led by Derrius Guice, Adrian Peterson, Chris Thompson, and Wendell Smallwood. Then came 2020, and not a single one of those players saw a touch.

Gibson was the leader of the backfield as a rookie, both on the field and in fantasy. Finishing as the RB13 in PPR formats (14.4 ppg), Gibson amassed 795 rushing yards (4.7 ypc), 247 receiving yards, and 11 touchdowns.

2021 should be no different. Washington elected not to bring in any serious competition, giving Gibson a clear path to 15-17 touches per game. He should once again be in the conversation for high-end RB2 status, but I think some risks are not currently being discussed.

Gibson was hyper-efficient as a scorer in 2020

We see 11 touchdowns and think, “great, I am getting that same player in 2021.” Well, that’s not quite how it works, as touchdowns are a somewhat inconsistent stat. The issue for Gibson and prospective fantasy managers is his propensity to find the end zone. It’s weird to say this as a quasi-negative, but hear me out.

In 2020, Gibson rushed for 11 touchdowns on just 170 attempts. That’s a touchdown on every 15.5 touches or 6.5% of his attempts. This ranked fourth in both TDs/rush and TD% behind Alvin Kamara, D’Andre Swift, and J.K. Dobbins. You could add Christian McCaffrey, but he played in just three games.

Also, it was Gibson’s incredible stretch that solidified his fantasy standings last season. After the bye week, Gibson went on a ridiculous run where he scored 7 touchdowns on 55 carries from Week 9-12.

Even though Gibson ended the season with 202.2 PPR, 27.3% (55.4) of his total came in his two games against the Dallas Cowboys. In his other 12 games, he topped 12 points just three times. Add in that Gibson exceeded 94 yards just twice (128 and 115) and the rock-solid foundation of his fantasy value starts to chip away.

Don’t get me wrong, I am a big fan of Gibson and believe he will be a fantastic fantasy RB in 2021. If he starts to see some more passing attempts, he could push the top 10 of the standings.

Be wary of news regarding Gibson’s ailing foot

In Week 13, Washington pulled off the upset of the season and knocked off the undefeated Steelers, but it came at a cost. On his second touch of the game, Gibson injured his toe after a tackle. It was later diagnosed as a turf toe injury and kept him out until Week 15. I am sure fantasy managers remember this as it came when the playoffs were underway.

According to Sam Fortier of The Washington Post, Gibson is still dealing with lingering effects of his ailing toe despite rehabbing during the offseason after electing not to have surgery. Fortier went on to say that, “he’s been rehabbing, and he’s able to make cuts he needs to, but it’s something he’ll have to monitor moving forward.”

Sure, it is only June, but this is enough to raise a flag and needs to be closely monitored. It’s been six months since the injury initially occurred, and the season is right around the corner. Anytime you invest significant draft capital on a player, they need to be as rock-solid as possible. Keep an eye on any news regarding this injury, as it could change his value on draft day.

Can J.D. McKissic come close to his target count from the last season?

McKissic saw a massive target share (19.1%), primarily due to Washington’s lack of options beyond Terry McLaurin. Although he played exceptionally well, Logan Thomas was anything but a surefire play at TE.

But is this the new norm for McKissic or an outlier? Before his 110 targets in 2020, McKissic saw 2, 46, 1, and 42 targets in his previous four seasons. I lean towards him being a staple in the passing game for Washington, but I don’t see him clearing triple digits again either.

First, the team has stated they want to get Gibson involved in the passing game more. After all, he was primarily a receiver at Memphis. Secondly, and more importantly, Washington made moves to bolster their receiving room. They made a big splash in free agency with Curtis Samuel and selected UNC’s Dyami Brown in the 2021 NFL Draft.

I don’t see how McKissic comes close to his RB16 finish of 2020. Currently, he is an RB4 for me in fantasy heading into 2021. I believe he will be more valuable to the Washington backfield than for fantasy managers. Without an injury to Gibson, McKissic could struggle in 2021 to replicate his previous success.

Who will be the fantasy RB3 from the Washington backfield in 2021?

Beyond Gibson and occasionally McKissic, we are scraping the bottom of the barrel regarding fantasy relevance in 2021 with the Washington backfield.

Peyton Barber is the RB3 on the depth chart but will not be a significant factor. Outside of his 17-carry Week 1, Barber saw double-digit carries in just four games, with two of those coming when Gibson was inactive. Should Gibson miss any games due to injury, Barber would be a name to remember for fantasy as the likely primary rusher. But outside of that, he lacks any path to reliable work in the Washington backfield.

Lamar Miller joined the team in free agency but has only played in one game since 2018 after tearing his ACL as a Houston Texan.

Despite being a touchdown monster at the University of Buffalo, UDFA Jaret Patterson will only see special-teams snaps in 2021.