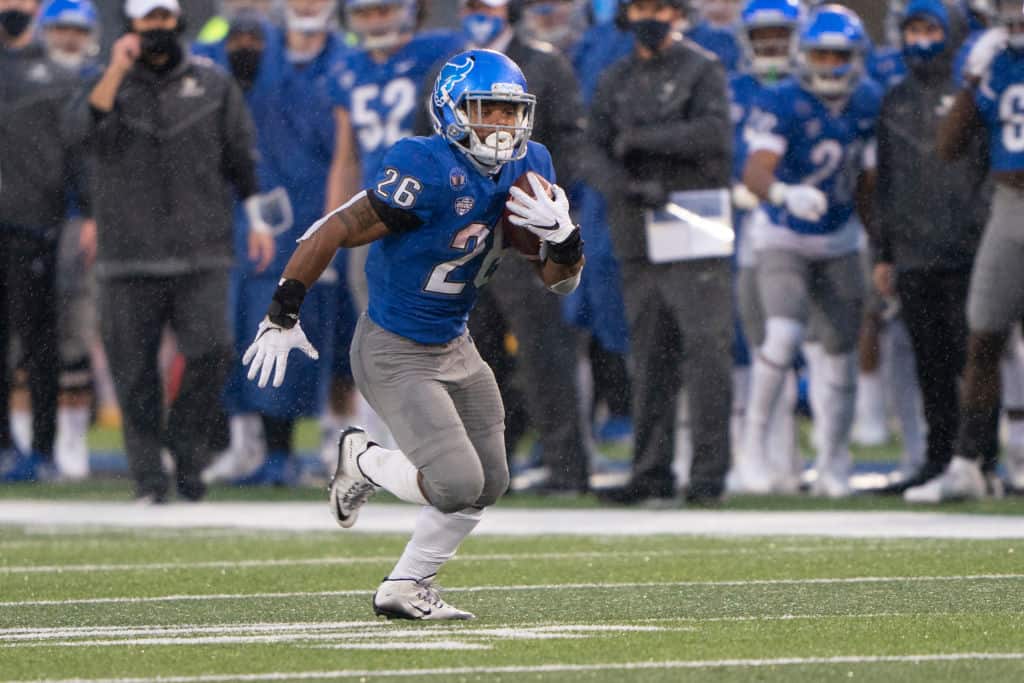 His college football story began in tears, but Buffalo running back Jaret Patterson heads to the 2021 NFL Draft as a record-setter. Under-sized and under-recruited just four years ago, can he follow Khalil Mack as the next great Buffalo player in the NFL?

Positives: Two-year starter coming off a record-breaking campaign. Instinctive football player with outstanding vision as well as ball-carrying skills. Quick-footed, displays solid short-area quickness, and sets up defenders to make them miss. Consistently keeps the play in bounds to pick up as much yardage as possible and runs north and south. Slides off defenders to keep plays alive, does not go down without a fight, and handles a lot of carries.

Runs behind his pads with excellent lean, aggressively attacks defenders, and drives his shoulders through opponents. Falls forward when tackled. Effectively helps the quarterback sell ball fakes. Patiently waits for blocks to develop, finds the running lanes, and weaves his way through traffic, finding the open spot in the defense. Effectively uses blocks everywhere on the field.

Negatives: Does not display himself as a creative ball carrier nor will he pick up a lot of yardage off initial contact. Plays to one speed and does not show a burst. Benefited from an outstanding line at Buffalo.

Analysis: Patterson was a terrific college ball carrier who showed up every week and consistently produced. He comes with average size and play speed and is not as highly rated as many think, but Patterson possesses the skills necessary to make an NFL roster as a fourth running back.

A Glendale, Maryland native, Jaret Patterson began his path to the 2021 NFL Draft playing high school football at St. Vincent Pallotti. Skinnier than the 195 pounds he heads to the NFL with, he was taken under the wings of a teammate who helped the young running back to get bigger and stronger.

The results would pay off in his senior season. He was named the St. Vincent Player of the Year as the Panthers landed the 2016 MIAA B Conference Championship. Patterson also earned All-State honors after a season where he rushed for 2,045 yards and 23 touchdowns.

In the standout performance of his high school career, he had 558 all-purpose yards against Riverside Baptist. In addition to 282 rushing yards, the running back also had 54 receiving yards, 124 kickoff return yards, and showcased defensive acumen with a 98-yard interception return.

Despite college football powerhouse Penn State being present for that performance, Patterson remained overlooked. A two-star recruit, his national player ranking was all the way down at 3,158. A meeting with Eastern Michigan where they bluntly rejected him left him in tears. Coming out of St. Vincents with his brother James, he eventually landed at Buffalo as part of a package deal to take both brothers.

Although he redshirted in 2017, Buffalo running back Jaret Patterson heads to the 2021 NFL Draft with three years of incredible production. As a redshirt-freshman in 2018, he was named the MAC Freshman of the Year. Further demonstrating his immediate impact for the Bulls, he was also named to the All-MAC Second Team.

In six starts, the Buffalo running back set a freshman school record with 1,013 rushing yards. In a stark warning of things to come, he rushed for a then-career-high in yards with 181 in the first half against Kent State.

He emerged into the national consciousness as a sophomore in 2019

Patterson led the MAC in rushing yards while finishing fifth in the nation. In the game against Bowling Green, he set a program and conference record in rushing for 298 yards and 6 touchdowns. Ending the season with 19 touchdowns and 1,799 yards, he earned All-MAC First Team honors. Additionally, he earned the Offensive MVP of the Bahamas Bowl.

Despite the disruption caused to the MAC season, he continued that momentum into 2020. He led the nation in average yards per game, helped by one performance in particular.

Coming back to haunt Kent State once more, he tied the FBS single-game rushing touchdown record and came up 18 yards short of the most rushing yards in a college football game of all-time. The MAC Offensive Player of the Year was also named a Second Team All-American.

After missing the Bulls’ bowl game due to a knee injury sustained in the MAC Championship Game, he decided to bring his college football career to a close early. Once under-recruited, undersized, and reduced to tears, Buffalo running back Jaret Patterson heads to the 2021 NFL Draft as one of the most productive college running backs in history.

Buffalo running back Jaret Patterson will be scheme versatile which gives him a lot of fits in the 2021 NFL Draft. He has shown he can run between the tackles but also demonstrates he can run outside too.

With his physical play style, he would perhaps be best with a team that operates a running back by committee approach. Patterson would be the physical complement to a faster back. The phrase “Thunder and Lightning” gets over-used when describing running back duos, but that’s exactly what Patterson could provide as the “thunder” element.