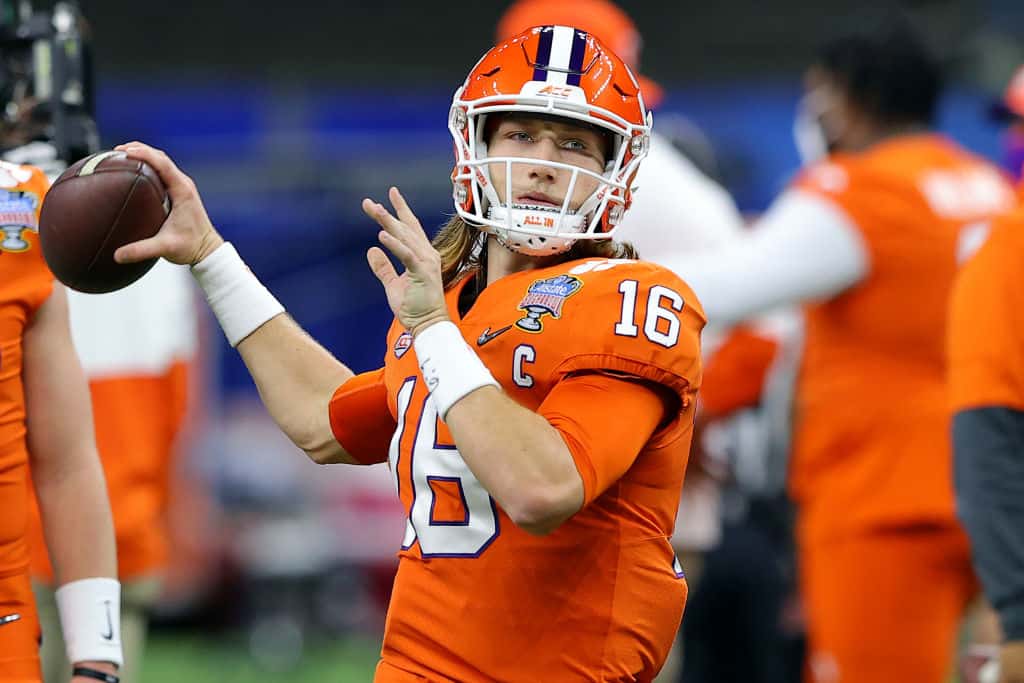 NEW ORLEANS, LOUISIANA - JANUARY 01: Trevor Lawrence #16 of the Clemson Tigers warms up before the game against the Ohio State Buckeyes during the College Football Playoff semifinal game at the Allstate Sugar Bowl at Mercedes-Benz Superdome on January 01, 2021 in New Orleans, Louisiana. (Photo by Kevin C. Cox/Getty Images)
What's in this article? Click to show
Trevor Lawrence’s Pro Day
Who else will see the field?
Want more NFL news and analysis beyond where to watch Trevor Lawrence’s Pro Day?

With the cancellation of on-field drills at the 2021 NFL Combine, college pro days become the best and just about the only way to see how soon to be draftees will perform in certain drills. One name front and center is Clemson’s junior quarterback Trevor Lawrence, the presumed first overall pick in the 2021 NFL Draft. With things starting soon, here’s all the information you need to know to find and watch Lawrence’s Pro Day.

The ACC Network will televise the event with a simulcast on ESPN2, with Rece Davis hosting the hour-long special. Joining him from Clemson, South Carolina will be NFL Draft analyst Todd McShay. The show will also feature contributions from NFL and ACCN analyst Tim Hasselbeck, ESPN CFB analyst David Pollack, and former Florida State quarterback E.J. Manuel from ACC Network’s “The Huddle.”

Why the rush for Lawrence’s Pro Day? The special is taking place on Friday, February 12th, instead of Clemson’s currently planned pro day on Thursday, March 11th. By the time of Clemson’s Pro Day, Trevor Lawrence will be recovering from surgery to repair his left labrum. Given the high demand to see Lawrence before the draft and the 2021 NFL Combine’s cancellation, NFL scouts are getting an early look at the consensus top QB prospect in the 2021 NFL Draft class.

Who else will see the field?

If Lawrence is going to perform drills as a QB at a pro day, he will need some receivers to catch the ball. Senior Clemson wide receiver Cornell Powell, who had an impressive Senior Bowl performance, will be at Lawrence’s Pro Day according to NFL Network’s Jane Slater. Yesterday, NFL Network’s Tom Pelissero revealed more former NFL receivers who will be catching passes from Lawrence, including Caleb Scott, Chris Finke, and Charone Peake.

Powell had the best season of his career in 2020. The senior set career highs with 12 starts, 53 catches, 882 receiving yards, and 7 touchdowns. He also earned third-team All-ACC honors in 2020 as a WR. Lawrence enters the 2021 Draft at the top of his class. A three-time ACC champion, a two-time first-team All-ACC, and national champion QB, Lawrence has more than impressed during his time at Clemson University.

He threw for 10,098 yards, 90 TDs, and 17 interceptions in his three-year career. The only two games Lawrence lost during his collegiate career were the 2019 Championship Game versus Joe Burrow and the LSU Tigers and the first round of the 2020 College Football Playoff against Justin Fields and the Ohio State Buckeyes.

While a sure thing does not exist in the NFL, it seems clear that Urban Meyer and the Jacksonville Jaguars will select Lawrence first overall in the 2021 draft. I mean, you don’t lose fifteen consecutive games to select the next best player.

Be sure to follow us on Twitter (@PFN365) to stay in the loop on football today and all things around the NFL. Also, continue to visit Pro Football Network for NFL news and in-depth analysis concerning the 2020 season and beyond.