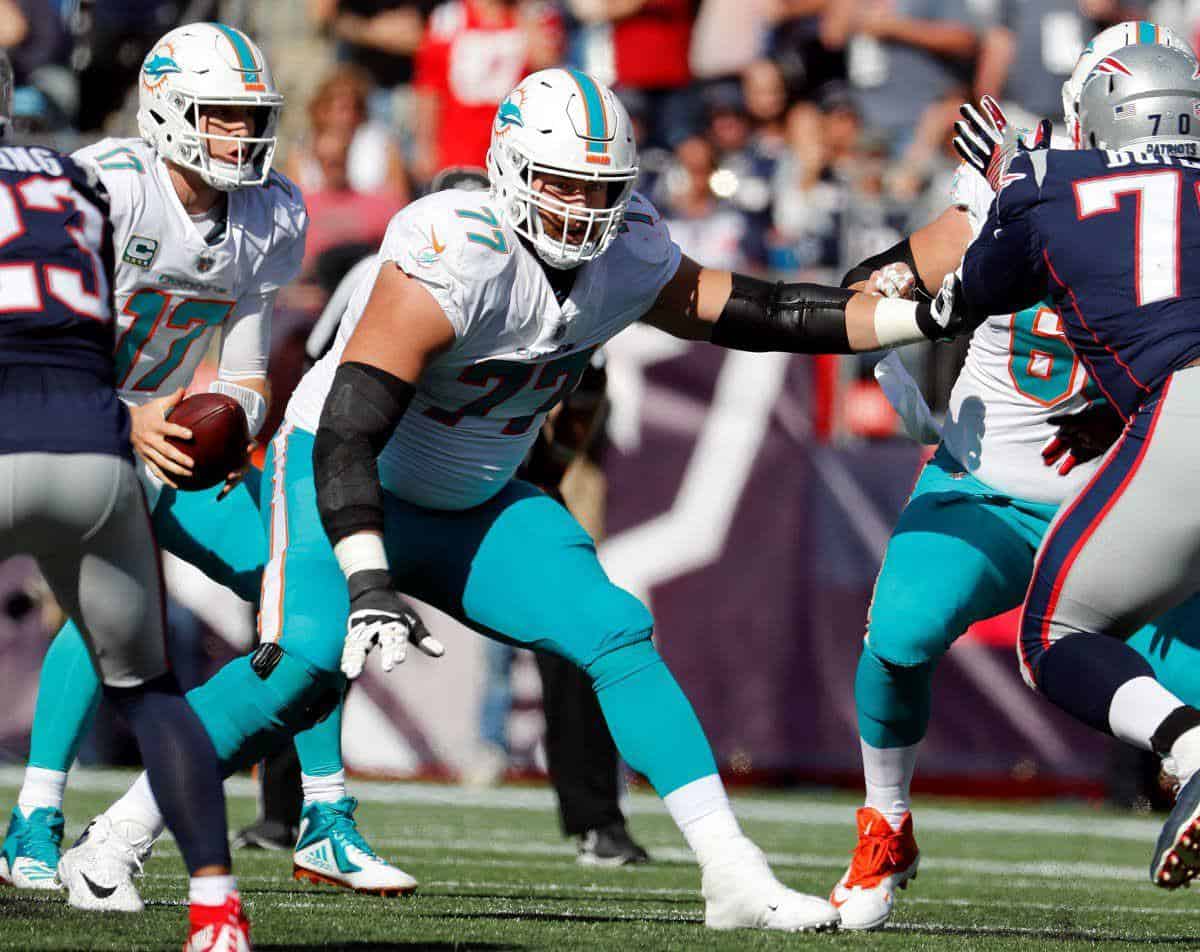 Photo Credit: Associated Press
What's in this article? Click to show
How do rookies Austin Jackson and Robert Hunt fit into the equation?
Could veterans Jesse Davis and Julie’n Davenport return as starters?
What other players could factor in the Dolphins 2020 offensive tackle battle?

The next chapter begins in the Miami Dolphins’ storied journey with the upcoming start of the 2020 training camp. The quest for supremacy in the AFC East, post-Tom Brady, continues with intense battles and the jockeying for position at some of the more critical spots on this football team. As we get closer to the season for the Dolphins, I will be rolling out 2020 previews for each of these position battles on offense, starting with the “big uglies” and the offensive tackles upfront.

The Dolphins have struggled in recent years to run the ball consistently and protect their quarterbacks, and that will be a primary area of concern and focus as training camp gets underway. While the passing numbers were decent in 2019, the team ranked dead last in total rushing yards and rushing yardage per game.

Below, I will break down the different contenders at the offensive tackle position and some individual battles that should grab the attention of Dolphins and NFL fans alike. Offensive success starts in the trenches, and Miami has some work to do before the start of the 2020 season.

How do rookies Austin Jackson and Robert Hunt fit into the equation?

Quarterbacks Josh Rosen and Ryan Fitzpatrick were battered and beaten due to the lack of experience and talent among the front five. In an attempt to rectify the situation, Miami dedicated multiple 2020 NFL Draft picks to fortify their tackle spots.

The Dolphins used one of two first-round selections on USC prospect Austin Jackson (18th overall), then followed that up by using the 39th overall choice on Louisiana’s Robert Hunt. PFN’s Matthew Cannata offered his analysis on those selections in a previous Dolphins Mailbag.

As one of the younger players in the draft, Jackson possesses immense upside and should be considered the favorite to start at one of the tackle spots. Hunt is a monster of a man and a mauler in the run game that profiles better on the right side. He will compete with Jesse Davis for the right tackle spot and could even figure in at guard early on in his career. He is explosive and a powerful blocker that should upgrade the rushing attack immediately.

Could veterans Jesse Davis and Julie’n Davenport return as starters?

Davis and Julie’n Davenport started multiple games for the Dolphins last season and could open 2020 camp as de facto starters at the offensive tackle spots. However, they will be pushed early by Jackson and Hunt. Davis has been an extremely versatile player for Miami since his arrival on the practice squad before the 2016 season. He was a 15-game starter at right tackle last season after starting all 16 games at right guard in 2018.

The incumbent Davis is a solid if unspectacular veteran presence on the offensive line for the Dolphins. He figures to get the first crack at retaining the right tackle job but will be involved heavily regardless of where he ends up, whether it be a starter or backup. The team has even discussed the possibility of moving Davis to the center position for 2020, per Joe Schad on Twitter.

As the longest-tenured player on this offensive line, it is clear the Dolphins value Davis as an essential piece to the puzzle.

Davenport is another returning starter who came over in the Tunsil trade from Houston. He is a former fourth-rounder of the Texans with great size at 6-foot-7 who stepped in as a starter right away due to the immediate need.

However, Davenport only ended up starting eight games for the Dolphins due to a rash of injuries and has yet to complete a full season healthy in the NFL. He may have the edge in experience at left tackle, but he is not long for a starting spot on this team.

What other players could factor in the Dolphins 2020 offensive tackle battle?

While the starters figure to be some combination of Jackson, Hunt, Davis, and Davenport, there are others on this team that could provide depth and injury insurance as the season wears on. Adam Pankey figures to be one of those players.

Pankey is a prior waiver claim from Green Bay with plus-size who played in two games (starting one) for the Dolphins in 2019.

Pankey will compete with undrafted rookie free agents Nick Kaltmayer and Jonathan Hubbard for the backup tackle spots. These are two prospects that also possess great size and should add power to the running game in the event of an injury. Hubbard made 11 starts for Northwestern State in 2019, while Kaltmayer was a 12-game starter at right tackle for the Kansas State Wildcats.

Scott Gorman is a lead writer for PFN covering the Miami Dolphins. You can follow him @sgormanPFN on Twitter.