The Dolphins took some heat for drafting Austin Jackson with the 18th overall pick. What does his RAS tell us about his chances at NFL success?

By Chris Spooner
May 17, 2020
Jump around this article Click to show
What is RAS?
How does Jackson’s RAS translate?
How does Dolphins’ Austin Jackson project?

Most thought the Dolphins reached for a left tackle at 18, given that the “Big Four” tackles were already off the board. Jackson was seen by most in the scouting world as a second-round pick at best — a player who has the traits, but who is raw and needs a couple of years to develop.

What did the Dolphins see in Jackson to take him so high? A dive into his RAS — or Relative Athletic Score — may give us some answers.

RAS is a metric developed by Kent Lee Platte that allows us to quantify and contextualize the athletic testing players undergo during the NFL Combine and their pro days. It’s great to know that a prospect ran a 4.53 40-yard dash, or was able to put up 38 reps in the bench press. But what RAS allows us to do is put these numbers into context — both with regards to his position and his contemporaries at the position. It allows us to set specific benchmarks that are used as performance indicators.

The Dolphins’ future left tackle Austin Jackson came into the combine billed as one of the more athletic players of the group. He certainly didn’t disappoint in his Indianapolis showcase.

Jackson turned in an “Elite” RAS score of 9.5, scoring as “Elite” in both explosion and speed, while not completing enough drills to complete an agility grade. His RAS of 9.5 makes him the fourth-best offensive tackle in RAS in the 2020 NFL Draft.

How does Jackson’s RAS translate?

As we can see from Jackson’s RAS, he’s an athletic specimen at the position. But how does that translate into the product we see on the field from the Dolphins new left tackle? Where these traits show up most often for Jackson is in his pass protection and his efficiency at it. Jackson is quick to get off the ball and get into his stance, a trait reflected in his elite burst numbers. 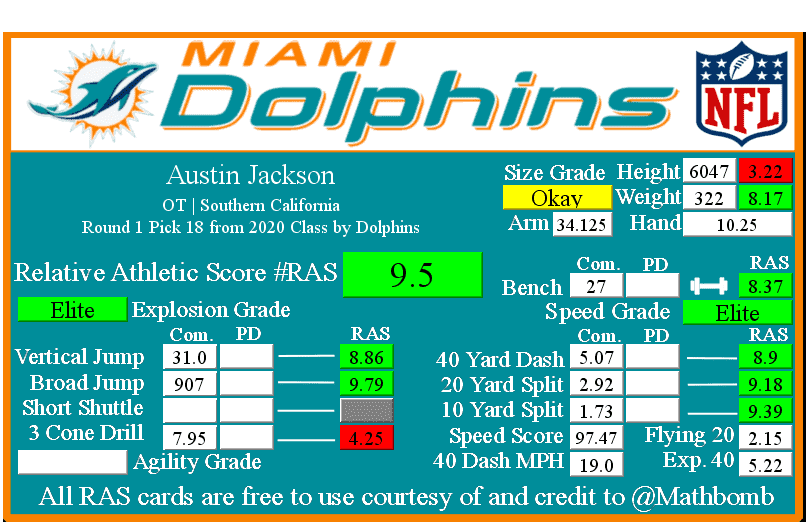 Furthermore, Jackson’s elite RAS also shows up in his ability to handle a blitzing pass rusher. Not only does Jackson possess the burst and athletic ability to control the rusher lined up across from him, but he also has the speed necessary to adjust to a blitz.

Jackson turned in a 5.07 40-yard dash time and a 1.73 10-yard split, which were good enough to score him high grads of an 8.9 and 9.39 on the RAS scale, respectively. This is evident in his ability to cut off blitzing angles and put himself in a position to keep his quarterback clean and upright.

How does Dolphins’ Austin Jackson project?

The Dolphins are getting a raw prospect in Jackson. There are no two ways about it and that’s always a dangerous game to play. The NFL Draft is littered with players who were raw but had “potential” and never panned out. However, the RAS data makes it clear that Jackson is a gamble worth taking for Miami.

Since the 2000 NFL Draft, there have been a total of 32 tackles drafted who have been named to at least one Pro Bowl. Of those 32, a whopping 25 of them have had “Elite” RAS scores of 8.0 or more. It’s plain to see that the more athletic your tackle is, the better the likelihood is that they’re going to find success in the league.

It’s important to remember that RAS is just one piece of the puzzle. It’s not the end all be all of the evaluation process. Simply because a player has an elite RAS number, does not ensure that player will develop into a stud in the NFL.

However, it is indicative of a player’s chances of developing. Taking the scores into consideration, it’s evident that the Dolphins have taken a calculated gamble with Jackson. It’s a risk that could pay enormous dividends for the team for many years to come.