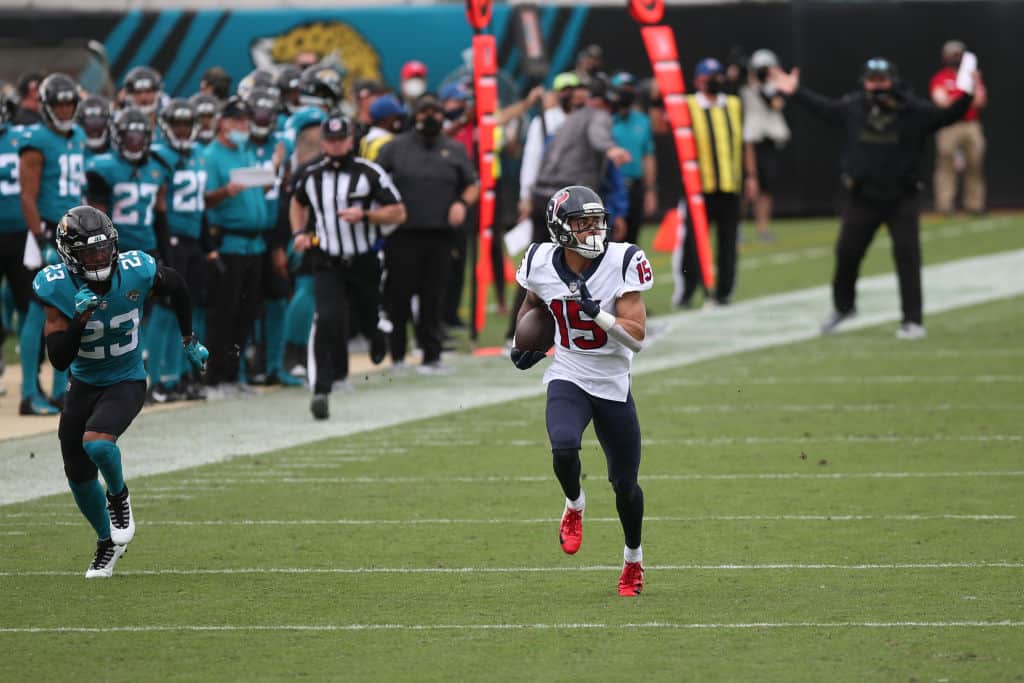 Week 9 was a great week to be a fan of quarterback and wide receiver play, particularly when compared to the week prior. So let’s dive into PFN’s Offensive Value Metric (OVM) top 10 weekly performances for NFL wide receivers and quarterbacks.

This week’s top four quarterbacks had higher OVM grades than any player at the position in Week 8. The story is even more extreme for the wide receivers, where each of the top six players from Week 9 outperformed the number one player from a week ago.

Once again, it is important to remember that the OVM, a grading system created by the (Bx) Movement to measure how important a player was to their offense, does not measure how talented these players are. In other words, a player ranking highly on these lists does not necessarily imply that they are strictly better than those below them; rather, it indicates that they performed at a higher level, given the situation they found themselves in. With that in mind, let’s get into the rankings of the top 10 NFL wide receivers and quarterbacks from Week 9.

Yes, I’m just as surprised as you are to see Flacco at the top of this list. It has been several years since he was considered an above-average quarterback, and the Jets are the NFL’s only winless team. However, Flacco was remarkably effective in perhaps New York’s best chance at a victory this season.

His completion percentage of 72% was a full 15% higher than expected according to the NFL’s advanced metrics, the week’s highest differential. That was even though he threw the ball a league-leading 13.2 yards downfield on average to receivers that were tightly covered on 24% of his throws, which ranked fourth.

Welcome to the spotlight, Tuanigamanuolepola Tagovailoa. His first start against the Los Angeles Rams was unspectacular, as he managed just 93 passing yards and one touchdown, leading to one of the week’s lowest OVM grades, at just 1.6. However, on Sunday, Tagovailoa found himself in a shootout with fellow youngster Kyler Murray, and he rose to the occasion.

His 71.4% completion percentage was 14.7% higher than expected, the third-highest differential in the NFL in Week 9, which is made even more impressive because the Arizona Cardinals defense did an excellent job of keeping his receivers covered, forcing Tua to throw into tight coverage 25% of the time, again third in the NFL.

Tua might have placed higher on this list of the NFL’s most valuable quarterbacks and emerged victorious from Sunday’s contest, but it wasn’t due to a lack of trying on Kyler Murray’s part. In terms of his traditional statistics, he outperformed Tua through the air and added over 100 yards, and added an additional touchdown on the ground.

However, the advanced metrics favor Tua overall. Murray’s completion statistics were slightly better, with an 80.8% completion percentage, a league-leading 15.1% higher than expected. The difference between him and Tagovailoa was the fact that Murray threw to a lot of open receivers, with the Dolphins defenders forcing him to throw into tight coverage just 7.7% of the time.

Carr has faced near-constant doubters in recent years, but he and the Raiders have been putting together a solid season. Despite relatively mundane box score statistics in Week 9’s win over the Chargers, Carr’s advanced metrics tell a different story.

He had the week’s second-highest intended air yards, at 12.2, and he threw into tight windows the second-highest percentage of the time, at 34.8%. His completion percentage was unimpressive, at just 56.5%, but that was actually slightly higher than expected given the situation he was in and the difficulty of the passes he attempted.

For the second week in a row, Rodgers ranks inside the top five on our list of top NFL quarterbacks. This time, however, the Packers were able to capitalize on his success, earning a dominant victory against the San Francisco 49ers, the same team that crushed them in each of their meetings last season.

Rodgers looked unstoppable, completing 80.6% of his passes, the fifth-highest percentage in Week 9. That total was 9.8% higher than expected, a differential that ranked sixth. He also got the ball out quicker than almost every other quarterback, taking just 2.43 seconds from the time of the snap.

After falling short in back-to-back games against elite competition, Allen and the Bills were finally able to pull out a victory against a playoff-caliber opponent. They defeated the Seattle Seahawks in a shootout, with Allen outdueling potential MVP-candidate Russell Wilson.

The area in which Allen stood out the most was his completion statistics. He completed 81.6% of his passes, the second-highest completion percentage of Week 9, 13% higher than expected, which was the fourth-highest differential of the week.

I know what you’re all thinking: the Bears offense has been awful in recent weeks, and their quarterback situation is a disaster. But Foles wasn’t the problem against the Tennessee Titans. It’s true that many of his statistics came late in the game with the Titans ahead by a significant margin, but Foles was able to pull Chicago back within a touchdown of tying the score.

Despite tough defense from the Titans, forcing Foles to throw into tight windows 21.2% of the time, his completion percentage was 9.7% higher than expected, the seventh-highest differential, behind six players that also made this list. He also threw the ball just 2.4 seconds after the snap, the second-fastest time-to-throw of Week 9.

Wilson has fallen off somewhat after an incredible start to the season, raising some doubts regarding the Seahawks’ status as Super Bowl Contenders and Wilson’s status as an MVP candidate. Seattle has lost two of their last three games, and Wilson has thrown five interceptions in those two losses, more than he totaled in the team’s other six games.

However, interceptions are not counted against a quarterback’s OVM grade, and Wilson’s other metrics are still impressive. Most notably, he threw the ball a relatively high average of 9.6 yards downfield despite being forced to throw into tight windows 19.5% of the time.

He might be the oldest player on this list, but Brees isn’t quite ready to go quietly into the night. New Orleans crushed their division rival Tampa Bay Buccaneers on Sunday to stand alone atop the NFC South, and Brees retook the all-time touchdown record from Buccaneers quarterback Tom Brady.

As has often been the case in recent seasons, Brees didn’t push the ball downfield, averaging just six intended air yards and throwing into tight coverage just 9.4% of the time. However, his completion percentage was just behind the week’s leaders, at 81.3%, 11.4% higher than expected, the fifth-highest differential in Week 9.

Since firing head coach Dan Quinn after an 0-5 start, the Falcons have won three of their last four games. Ryan’s OVM grades during that streak have been relatively consistent, ranging from a low of 28.08 to a high of 32.3, and this week he snuck onto the list of the top ten NFL quarterbacks.

Unsurprisingly, his advanced metrics generally seem underwhelming compared to the players ahead of him, although they were all well above average. His most impressive statistic was his average intended air yards of 9.7, tied for eighth this week.